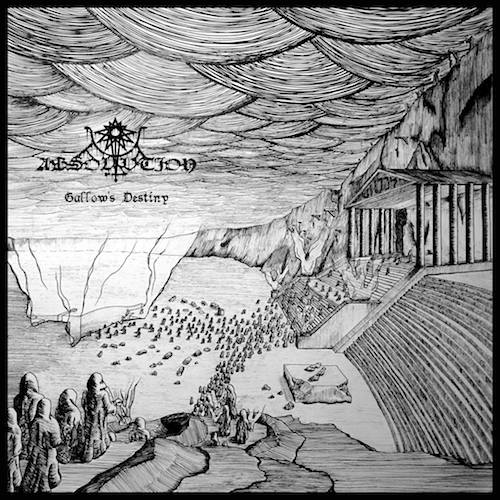 The music here pulls the listener headlong into an alien nightmare, choking with the aroma of pestilence and dazzled by visions of shape-shifting archfiends. Both cruelly oppressive and irresistibly innervating, the song becomes an eye-opening herald to Absolvtion’s rising power within the globe-spanning realms of the black/death underground.

The band create this vivid conjoining of malefic atmosphere and pulse-pounding energy by layering a twisted array of riffs over constantly changing drum patterns and the low hum and throb of the bass. The vibrating chords and seething leads create a warped, swarming sound, manifesting sensations of greater and lesser degrees of demonic frenzy, while the vocalists’ sepulchral roars and vile shrieks channel an imperious contempt.

Or, to put things in more referential terms, if you have a taste for the music of such bands as Vassafor, Temple Nightside, Pseudogod, or Archgoat, you will eat this up… or it will eat you up.

For more info about the release of Gallow’s Destiny as July 31 draws closer, check the following links:

Track List:
01. Gallow’s Destiny
02. The Lion’s Face
03. Spriritual Ascension
04. Concrescence of the Opposite