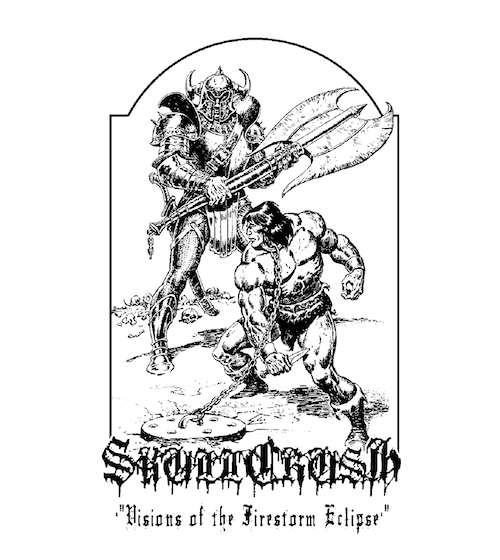 Skullcrush? Yes… that name works… but so would SpleenRupture, SpineSplinter, KidneyPunch, JawFracture, SkinFlense… and I’m sure I’m forgetting other body parts that their music mutilates (figuratively speaking of course — you’ll survive the experience intact, probably).

Yes, Skullcrush is a fine name for the kind of death metal this Arizona band dish out on their debut EP, and the Conan-themed cover art is also fitting. So is the EP’s title — Visions of the Firestorm Eclipse — as you’ll discover when you listen to our full stream on this Friday, the 6th of July, the day of its release by the Glasgow-based label Camo Pants Records.

But we hasten to add that the brutalizing qualities of the music shouldn’t be over-emphasized; there’s a lot more going on in this EP than skeletal demolition and furious evisceration. The name SoulSlaughter would have worked, too. 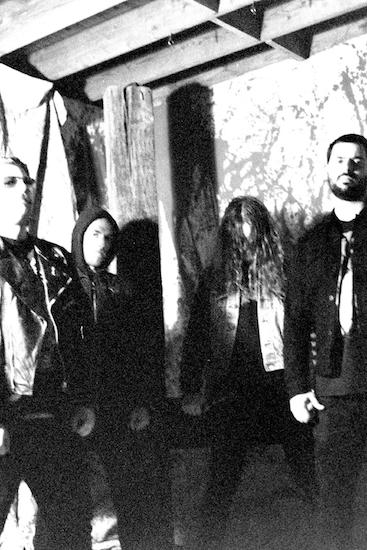 These visions of Skullcrush manifest themselves in four tracks. When DECIBEL premiered one of those, their writer opined: “Well if you like your death metal to sound like Incantation crossed with Bolt Thrower and Human Waste-era Suffocation (and a touch of Karelian Isthmus-era Amorphis), then Camo Pants Records has a real treat for you coming out on July 6.”

If you think about those references, you’ll realize that the music here isn’t all one thing, and in fact every track turns out to be multifaceted and dynamically changing, reflecting more nuanced song-writing than you might expect from a band named Skullcrush.

All the songs benefit from a powerful sound, from a drummer who seems to find just the right fills and rhythmic shifts to suit each facet of each song (including bursts of hardcore-punk scampering and brawling), and a vocalist whose heartless roars and skin-splittng shrieks channel rage and wretchedness in particularly ghastly fashion. But they also benefit from the insertion of emotionally evocative melodies and the use of varying methods of achieving devastation.

Don’t adjust your set when you hear those glitchy sounds at the beginning of “Spectacle of Suffering“. Soon enough, it kicks into gear, delivering a mix of vicious boiling riffs segmented by bursts of bludgeoning bass punishment over a sequence of galloping, blasting, neck-snapping drum rhythms. A slow-down also lies ahead, and it’s a massive head-mover, and when the pace slows a second time, it makes room for a grieving guitar melody and a buzzing riff that’s authentically dismal.

“Mists Of Blood” provides a further example of the EP’s dynamism, moving seamlessly from an immediately addictive, compulsively headbang-able, jackhammering slugfest into a cold, grim, murderous stomp, after which the band ramp up like a charging freight train. They also slow the pace, making way for a morbid melody that channels the groans of desolation; they bolt into a brawling mayhem accented by a screaming, fret-melting solo; and they slow again, mounting a staggering, head-hammering procession to the gallows laced by supernatural guitar emanations.

“Entrails Ablaze” is the shortest track on the EP, and as its name suggests, it’s fiery and ferocious, blasting and punching hard, and rough-housing to a punk beat. But there’s also a roof-collapsing breakdown in this baby, and a pair of wailing solos that are scintillating.

The shortest track is followed by the longest, and the most desolate. “Hellwater” presents a dire, doomed, bone-breaking slog and a dismal, slowly slithering lead redolent of misery and hopelessness. The song does periodically accelerate, eating up the rails like a freight train, but the heart of the song is in its minutes of measured, brutal pounding and its heart-breaking melodies, which sometimes seem perched on the sharp edge of derangement.

And so, there’s a risk that the band’s name could be a tad misleading.   pave their roads with broken skulls, to be sure, but those blasted pathways will take you to places you may not expect. And that’s a big part of what makes this EP a big cut above  the more usual spectacles of death metal devoted to bludgeoning and mortification.

Visions of the Firestorm Eclipse will be available today from Camo Pants Records on cassette and as a digital download.

3 Responses to “AN NCS EP PREMIERE (AND A REVIEW): SKULLCRUSH — “VISIONS OF THE FIRESTORM ECLIPSE””