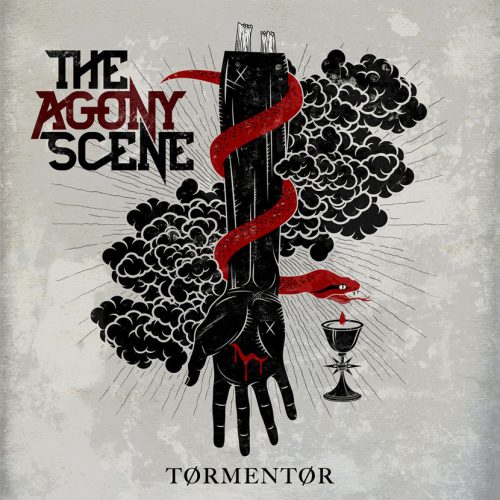 (Andy Synn prepared this review of the new album by The Agony Scene, which will be released on July 20, digitally and in physical editions via Outerloop Records/Cooking Vinyl.)

So-called “comeback” albums can be a dicey affair. Attempts to recapture past glories can easily sound dated and contrived, while efforts to demonstrate progress and evolution can just as easily alienate the very audience who’ve been waiting so patiently for your band’s return.

It’s a difficult line to walk at the best of times, and I’ve lost count of the number of artists who’ve stumbled and fallen while attempting to navigate this particular musical minefield over the years.

However in this particular case The Agony Scene look to have succeeded where so many other have failed by producing an album which sounds like a natural extension of their earlier work – albeit one informed by a solid decade of growth and experience – as well as an exploration of fertile new pastures.

And I guess it doesn’t hurt that it also just so happens to be the darkest, most visceral album of their career.

Take the punishing “Hand of the Divine” and the ravenous “Mechanical Breath”, the two tracks which begin and end Tormentor, for example.

While both are clearly the product of the same fevered minds who once cranked out tracks like “Scapegoat” and “Barnburner” with such rabid conviction, they’re also significantly harsher, heavier, and more hostile, than anything which the band have previously put out, mixing the chunky, saw-toothed riffs of their earlier years with a new-found penchant for scorching tremolo lines and blistering blastbeats (courtesy of devastating drummer Brent Masters), which adds an extra edge of intensity and extremity to what was already a pretty potent sound.

The big shocker, however, is just how much this slight twist to the band’s signature style makes them sound like Goatwhore in places, as the blend of bulldozing blastery, frantic, blackened riffage, and grim ‘n’ gritty grooves found on “Like the Weeds in the Fields” and “Tormentor” could just as easily find a home on A Haunting Curse or Blood for the Master, while if you were to switch out the paint-stripping shriek of Michael Williams and replace it with the belligerent bark of Ben Falgoust on killer cuts like “The Ascent and Decline”, “The Submissive”, and “Serpent’s Tongue”, there’s a good chance nine out of ten listeners wouldn’t be able to tell the difference between the two bands, the resemblance really is that close.

That being said, these sonic similarities seem more like the result of unconscious synchronicity than any conscious attempt to ride the coattails of Sammy Duet and co. as, when all is said and done, Tormentor stills feels like an Agony Scene album, and genuinely comes across as an organic evolution of the more abrasive and aggressive approach they were toying with prior to their break-up way back in 2008.

Whatever it was that happened to the band during the last ten years or so, whatever hurts and hardships they’ve experienced, it clearly lit a fire and reignited their passion for what they do, with the result being that this particular album is not only an unexpectedly successful comeback but also an impressively intense statement of intent from a group who clearly aren’t quite ready to give up the ghost just yet.

3 Responses to “THE AGONY SCENE: “TORMENTOR””