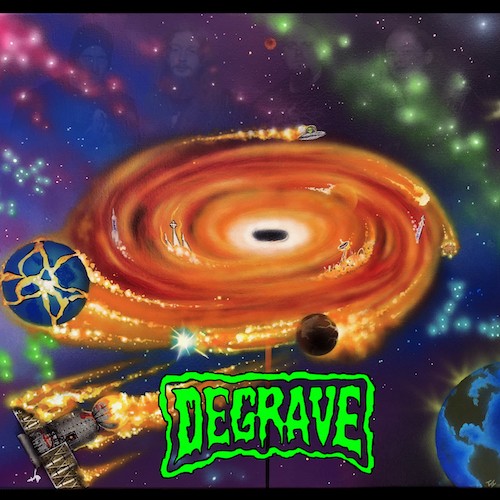 By coincidence, in the NCS post immediately preceding this one my comrade DGR acknowledged that thrash has been “something of a blind spot for this site”. “We basically have a handful of favorites and will notice absolute standouts among newcomers, but overall we’ve never had a fully dedicated thrash person here”. And that’s all pretty much true — including the part about noticing absolute stand-outs among newcomers, and man, do I have one of those for you here in Missouri’s Degrave.

When I saw references to Vektor in the press materials for their new self-titled album, I was both excited and skeptical — because Vektor blaze like a meteor in the night sky, and the kind of stuff they pull off is hard for anyone to compete with. But it turns out that the music on this new Degrave album is legitimately mind-blowing.

These tracks are so head-spinning that it left this listener constantly bewildered and bedazzled, wide-eyed at the technical pyrotechnics on display here, and in a state of gob-smacked wonder at the sheer exuberant devilry displayed by the song-writing.  I could hardly be more excited to share the full album stream with you today — and I say that for whom thrash is pretty far down the list of favorite metal genres 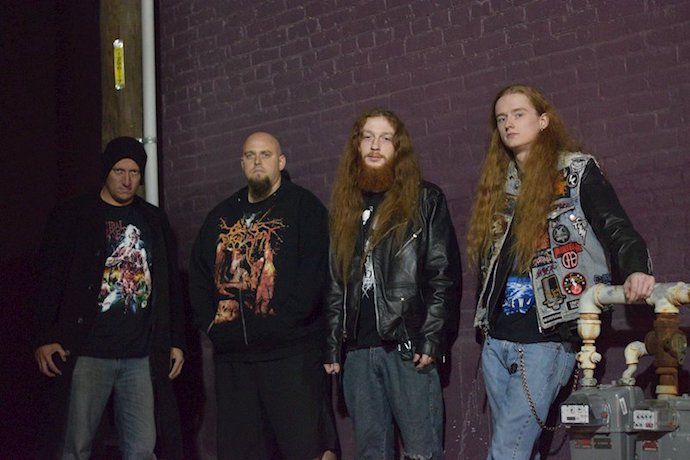 You’ll discover very quickly how technically impressive each performer is, as you marvel at the nimbleness of Jordan Roedel’s big, beefy bass tones, get your head fractured and your body moved by the razor-sharp (and often maniacally frantic) drumming of Jeff Kearney, and become ensnared by the whirling riffs, blazing melodies, and mercurial arpeggios of guitarists Dylan Volmert and Clyde Daniels, which bubble, slither, and dart about like swallows pursued by eagles. And that doesn’t yet count the vast array of finger-bleeding solos in these songs, which go nuts at 1000 mph, or the fast-veering tempos that might move like rockets one minute and lurch like reanimated ghouls the next.

Meanwhile, Dylan Volmert‘s vocals are so scalding and intense that they might raise goose-bumps on the back of your neck. They move between throat-ripping shrieks, murderous, capillary-bursting yells, panther-like howls of ecstasy, and desolating, falling wails (and I haven’t exhausted all the sounds that come from his throat, or those of his bandmates).

“Exuberant” really is an understatement for these performances. To be sure, Degrave do lock into big headbanging rhythmic sequences (in which the guitars still squall, mewl, and scream) — the one in “Ascension” is a particularly marvelous, because it ends with the band stepping on the pedal in a controlled acceleration that eventually sends the song off the road and zooming into the sky — but perhaps the biggest hallmark of the album is that around every sharp corner, something new awaits.

Even when the fast-twitch riffing slows down and gets grim, the drummer might pick that moment to go nuts (“All You Need”); sometimes everyone goes nuts together or picks a time to pull your brain into a freakish hallucination (both things happen in “Tortured”); at other times it’s just good-ol’ full-tilt thrash electrification in all its glory (“New World Disorder”, which includes one of many solos so electrifying they might cause your eyes to roll back in their sockets).

“Inside Out” turns out to be a sublime acoustic guitar instrumental (believe me, you’ll be ready for a breather at that point), while “Shades of Black” is a cold-hearted, head-busting bruiser that seems like a trip through a haunted house (although Degrave also open up the throttle during that ghoulish trip, too). If you want a neck-wrecking, piston-pumping marauder, try out “The Hollow Watcher”. If you prefer to have your neurons severed and re-wired by mad scientists who have no use for anesthetics, launch yourself into the full-throttle lunatic thrill-ride of “Grander Grandeur”, in which the guitarist and the bassist at one point seem to be in an insectile kind of duel.

And Degrave save one of the best for last in “Hatriot”, which opens with a delectible bass solo and gives the band one final opportunity to put your brain in a centrifuge and your body on a roller-coaster.

There’s room for more than one meteor in the night sky, and Degrave earn their place there with this album. It will be self-released on July 27th, and it will be available for pre-order later today at the link below: