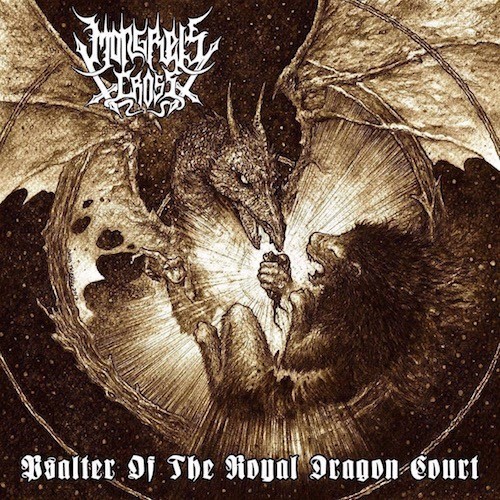 The eye-catching cover art for Psalter of the Royal Dragon Court provides immediate clues to the music of Mongrel’s Cross, as captured in this, their second album. It’s ravaging and regal, sinister and searing, warlike and overflowing with a kind of mythic grandeur. It’s the sound of saga, with an aura of larger-than-life fantasy surrounding all of its movements. And it’s almost relentlessly explosive, blazing like a comet in the heavens, or like the fireballs erupting from that clash of titans on the cover.

And unless you think I’ve gotten too carried away, and gone too over-the-top in my reactions to this thoroughly over-the-top music, just listen for yourselves — which you’ll be able to do right now, as we premiere the entire album in advance of its release by Hells Headbangers on August 3rd. 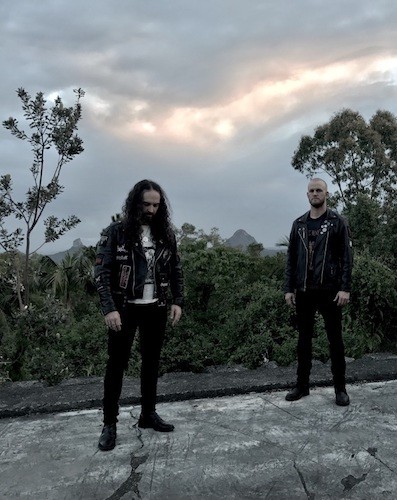 This Australian duo may call themselves Mongrel’s Cross, and the music is indeed a cross in stylistic terms, incorporating the sounds of black metal, thrash, and “classic” heavy metal of the finest kind, but it seems more like a pure-bred greyhound rather than a starving back-alley cur, maybe with a lot of draconic DNA in the mix.

The clear production of the music reveals all the ingredients in electrifying fashion — the deep bass, the snapping snare, the vibrant riffs and vivid leads, the gloriously swirling solos, the occasional appearance of sweeping angelic keyboards, the raw, throat-shredding vocals. In addition to all of those ingredients, every track reveals scintillating song-writing skill, each one packed with melodic hooks and fireball energy.

The songs include a dynamic mix of tempos and drum rhythms, from neck-snapping back-beats to turbo-charged blasting, from thundering cavalry charges and slashing melees to dizzying cloud-bound ascents on giant bat-wings. You experience the blood-lust of a war charge and the stateliness of an infernal coronation. And while there’s a primal physicality to the music (it’s catchy as hell and hugely head-moving), there’s also a mythic air, as mentioned before.

Oh hell, it seems I’m getting carried away again. But it’s damned hard not to get swept away by Psalter of the Royal Dragon Court. It’s a Grade-A thrill-ride from start to finish that should not be missed by lovers of heavy music, regardless of genre. Experience it below.

4 Responses to “AN NCS ALBUM PREMIERE (AND A REVIEW): MONGREL’S CROSS — “PSALTER OF THE ROYAL DRAGON COURT””