In other words, as prolific as Ultha have been, we’ve devoted attention to everything they’ve done so far. Why stop now? 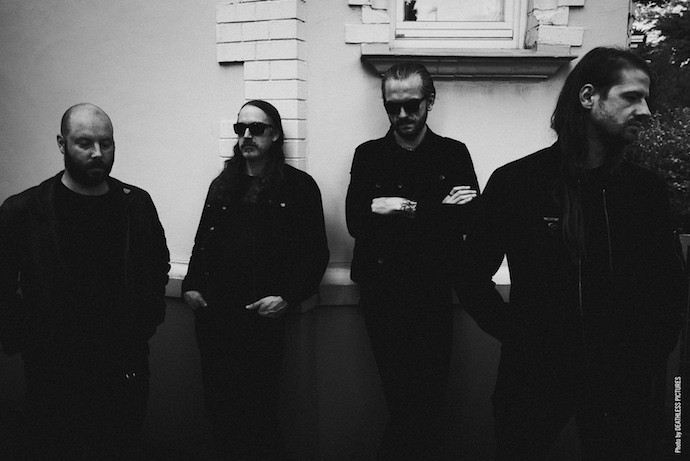 Allowing no grass to grow beneath their feet, Ultha have completed a third album, The Inextricable Wandering, which will be released on October 5th by Century Media. It’s a substantial work, presenting six tracks that range in length from more than six minutes to more than 19, with a total run-time of more than 66 minutes. The first of those, “The Avarist (Eyes of a Tragedy)“, was released for streaming last week through a premiere at CVLT Nation.

For such a long and profoundly atmospheric track, it’s a spring-loaded one, too. Fog and phantoms drift and shimmer in the gloom; heavy, heaving chords and high, haunting tones cloak the music in a mounting tension; bestial roars enhance the feeling of looming peril — and the music convulses in spasms of searing derangement, the voices multiplying in a near-cacophonous outpouring of agony and rage, the drums hammering, the guitars erupting in outbursts of warping discordance and flickering lunacy. Through it all, giant undercurrents of darkness continue to move in dramatic heaving waves.

Both oppressive and glistening, fearsome and fantastical, the track becomes intensely spellbinding, and well worth all of its minutes. I haven’t had a chance to hear the rest of the album yet, but strongly suspect all of its many minutes will be worth complete immersion.

(I thank my Norwegian friend eiterorm for alerting me to the appearance of this song.) 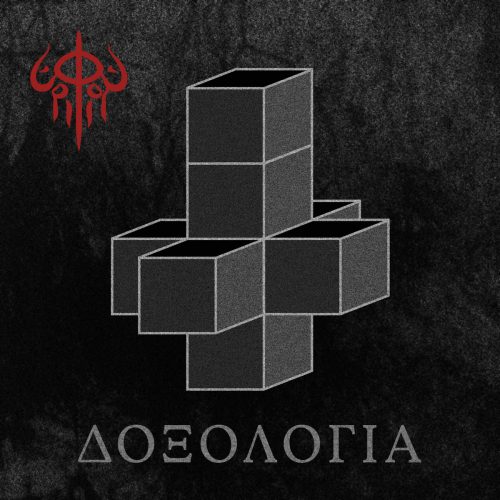 The Athenian one-man black metal band Eriphion made a very strong first impression through its June 2018 debut EP Hossana, which I reviewed here, praising it as “a huge surprise, an unusually accomplished and multifaceted creation that sounds years ahead of what you might expect from any band’s first EP.”

With an advent as good as that, I wasted no time checking out the band’s first full-length, Δοξολογία (the Greek word doxologia, which means “glorification”), which was released through Bandcamp on August 15th. It deserves an even more thorough assessment than what you’re about to read, but it’s the only assessment I have time to give it.

This new album is black magic, by which I mean that it’s convincingly dark, often just as convincingly otherworldly, and also deeply affecting on an emotional level. There’s tension and gloom in the music, but also a feeling of occult mystery and of arcane poison in the vaporous emanations of these sounds. In writing those words, I don’t mean to mislead you — these songs are also propelled by powerful rhythmic drives, with a strong and lively bass presence and changing drum rhythms and cadences, which make this sulphurous and spectral music really head-moving.

The music is also enriched by melancholy melodies that have strong emotional resonance; the pain and longing they convey is intensely human, even if other aspects of the songs don’t seem human at all. And while tracks like “The Worship” and “Sin Is Calling” have a strong infernally atmospheric component, other tracks (such as “Ashes To Ashes” and “Winter Fire”) are fiery, blood-rushing, hard-rocking manifestations of menace and mayhem, while others (such as “Corridor of Souls”, “Welcome to the Nightmare”, “The Immortal”, and “Doxologia”) are magisterial expressions of utter desolation.

But really, it’s a bit misleading to encapsulate any one of these songs in the way I just did, because all of them are composed of changing moods and textures, though some are more dominant here and there.

One thing is consistent throughout: There’s tremendous magnetic appeal to the riffs and leads in these tracks — Eriphion is an extremely talented songwriter — and his vocals are remarkable as well. Yes, they’re scary as hell, but a fine match for the intensity of the music. All these qualities combine to make for a completely gripping and quite memorable album. 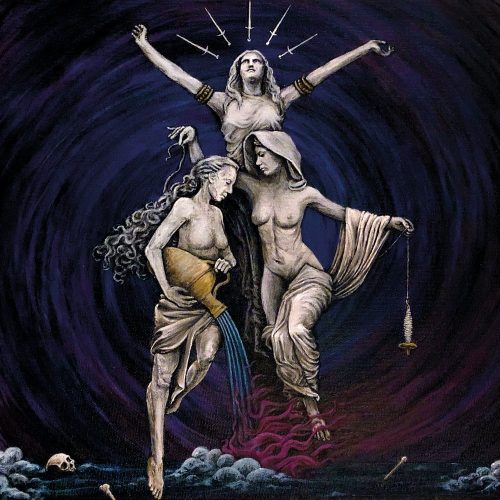 I encountered the French band Dysylumn for the first time almost exactly two years ago through their impressive Chaos Primordia EP, which was released in October 2016. It was their appearance on a new split that prompted me to check out the two songs from it that can now be heard, and as a result I made an exciting new discovery — the other French band on this split, Malepeste. The name of this split is Ce qui fut, ce qui est, ce qui sera (“what once was, what it is, what it will be”), and it’s set for release on October 15th by Goathorned Productions.

The first of the tracks below is a Malepeste song, “Atropos“. The changing spectrum of vocals — wailing, shrieking, roaring, and crying out — display a fervency of devotion that befits the mystical reverence of the music, which proceeds in a slow and stately cadence and shines, through its layering of guitars, with a kind of paranormal incandescence. Intense grief seeps into the mind as the song moves and as the melancholy mood of the melodies grows deeper and more intense. A tough one to get out of your head and your heart by the time it ends.

The Dysylumn track from the split that’s been recently revealed is “Decima“, and it beautifully complements “Atropos“, almost as if spawned by the same or similar visions. It also proceeds at a solemn pace, and there’s a similar ghostly quality to the trilling lead riff. The music seems to soar, and then takes off in a surge of battering drums and chiming notes. The song moves back and forth, slowing and rushing, alternately ethereally beautiful and viciously grim. Here, the vocals are also riveting, and a match for the fervent passion displayed on Malepeste‘s track, and there’s some beautifully felt basswork in the song’s moodier movements as well. I found the track utterly spellbinding. 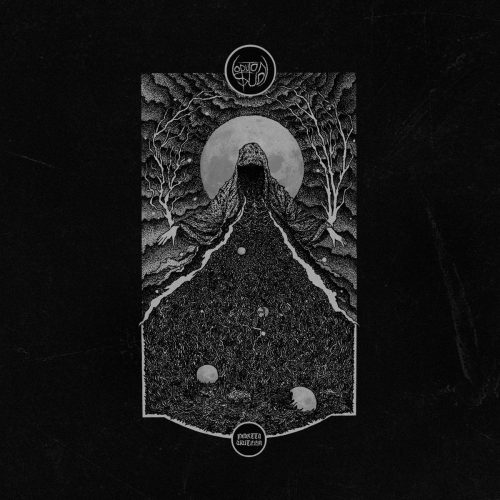 To conclude this giant two-part post I’ve chosen Portti uuteen, a new EP released on August 9th by the Finnish quartet Loputon Suo. They tell us that their band name is Finnish for “endless swamp” — “an expression for when a task feels overwhelming, a place of despair”, and that they’ve drawn inspiration from the likes of Drudkh, The Ruins of Beverast, Agalloch, and Dead Congregation. This new EP is the band’s second release, after a 2015 self-titled demo.

The ambient introductory track (“Polku“) seems chiefly designed to create a mood of mystery and malignancy (thanks to its crocodilian and goblin-like vocals), and those moods don’t seem out of place given the bleak, harrowing nature of the first true song, “Ääni jään alta“. The harsh vocals have an inherently agonized quality, cracking with pain and roaring hoarsely in a kind of splintering rage, while the music is seriously bleak, even as it thunders. The plaintive guitar strumming in a mid-movement interlude drag the song into an even more depressive place, where the vocals seem like the expressions of one driven mad by the trauma of some terrible loss.

The chaos of emotional devastation seems to reign at the end of “Ääni jään alta”, and that intensity carries forward into “Tyhjyyden airut”, a song driven by a furious drum gallop and patterned with unnerving guitar sounds that burst through the oppressiveness of the buzzing riffs. The song eventually changes, becoming a dismal dirge of plague-like proportions, with horrific chanted vocals and a soulful, entrancing solo streaked with tears.

The longest track is left for last. “Kylmän käden ote” picks up the pace in a vibrant surge right from the start, though there’s a wailing, lamenting quality about the lead guitar and an air of despondency in the riff. As you’ll expect by now, the vocals are still a fireball of pain, and seem to tune the agony within the music to an even more severe degree. The song is also host to some head-moving drum and bass rhythms. It proves to be a very catchy track, notwithstanding its atmosphere of persistent tension and torment.

All in all, Portti uuteen proves to be a very impressive new discovery, creating dark moods that are hard to shake off after it ends.