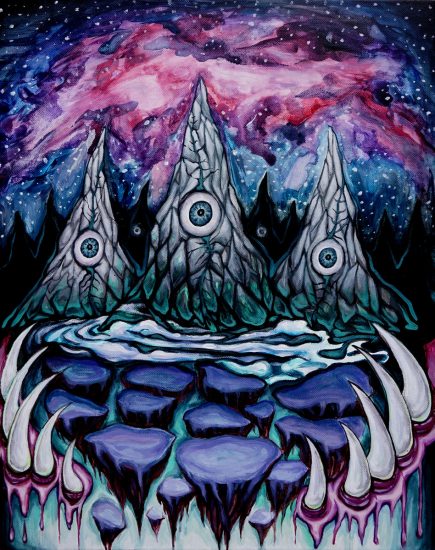 I feel compelled to begin the introduction to this premiere with an uncalled-for comment about the band’s name: Don’t be fooled by it.

At one time or another we’ve all been bedsore, waking up cranky and achy. But sleeping poorly and moving slowly upon rising is such a drab, mundane experience, one you just want to banish with the aid of a gallon of coffee. But there’s nothing mundane about the song you’re about to hear, nothing dull or forgettable. To the contrary, it’s a big eye-opener, an unexpected bolt from the blue that proves to be both mystifying and harrowing, a labyrinthine excursion through a nightmare realm. 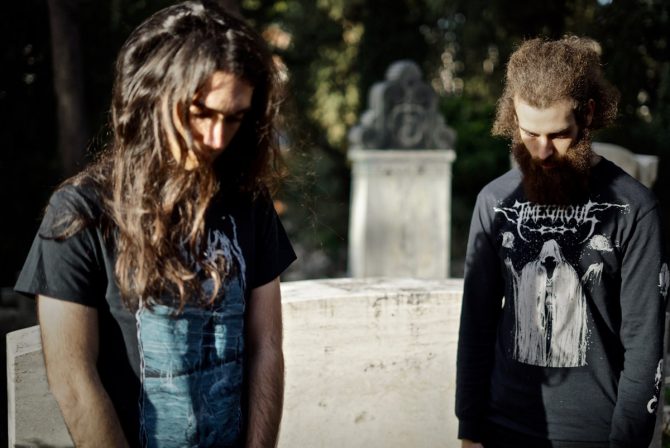 I’m afraid I don’t have much information to give you about the band, beyond the fact that they’re two men from Rome whose initials are JPG and SA, and that they have a manifestly idiosyncratic imagination, which extends beyond their choice of a band name. Their imagination is made manifest in the song we’re bringing you today, “At the Mountains of Madness“, which is one of two substantial tracks on their self-titled debut demo.

I’m tempted to write nothing about the song, because I kind of regret spoiling all the surprises. But I’m doing it anyway. If you’d rather not have any spoilers, just skip straight down to the player and dive in.

“Labyrinthine” really is an appropriate word for this lengthy musical excursion. In a very broad sense it builds slowly, reaches a crescendo, and then returns to something like the place where it started — which is a very spooky place indeed — but there are manifold twists and turns along the way.

Moody guitar reverberations and mist-like shimmering tones provide the introduction, with those increasingly unsettling sounds flowing into a kind of moaning melody over a slow bass pulse. A drum beat surfaces, the guitar spirals and becomes even more eerie in its atmosphere, and then a darting riff and a ghastly howl kick the song into a more steady gear. The mood of horror in the music becomes stronger, made even more gruesome by the vocalist’s livid, lunatic cries — and then the drums begin galloping, and the guitar flickers and twists, channeling a feeling of delirious pain. And finally, the crescendo arrives as the drummer starts blasting and the riffing transforms into a manic swarm.

Just as suddenly, the drums disappear, the bass reverberates, and the lead guitar ripples ominously, to be joined by a massive stalking riff and a booming drum rhythm that together drag the song into a doomed, sepulchral place, as the vocalist shrieks in a demented fury. All of this paves the way for an ear-grabbing dual-guitar solo that’s both shot through with agony and flickers like flame.

At the end, chiming chords ring out; warbling, squalling, and shining sounds emerge; and you’ll hear a channel-shifting, bluesy arpeggio. It’s sort of a reprise of the song’s haunted opening, and it proves to be mesmerizing.

As noted, this is one of two tracks on Bedsore’s debut demo. The other one is “Brains on the Tarmac”, which is more than 8 minutes long. I haven’t heard it yet — but I’m anxious to do so. You can pre-order a digital download of the demo at Bandcamp. It will be released on September 21st.

8 Responses to “AN NCS PREMIERE: BEDSORE — “AT THE MOUNTAINS OF MADNESS””