Arkhamin Kirjasto have recorded 19 songs so far, in the eight years they’ve been together, but I continue returning to one song, because it has such tremendous primal attractiveness that it rises up from my memory in a way that few songs do. And it did again last night, and that’s all it took for me to find one more excuse to put the stream on our site. 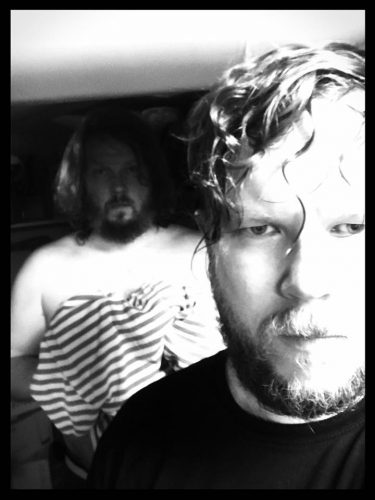 The song is “Cult of No Return“, and it appeared on Arkhamin Kirjasto‘s only album (so far), Torches Ablaze, which I reviewed in September 2012, and included these words:

“They’ve pulled off a neat trick on their virally infectious debut album: combining throwback heavy metal riffs, death metal vocals, atmospheric guitar touches, and Lovecraftian lyrics in a way that’s as interesting as it is irresistible….

“…An argument could be made that all infectious music is simple. It’s not that our minds are incapable of remembering complexity, but there’s something about simple combinations of chords and rhythms that have a way of embedding themselves. Of course, creating such things isn’t easy. Arkhamin Kirjasto have that special knack for creating infectious music, but they’re not satisfied with delivering viral riffs that would be right at home in a Priest or Maiden or Motörhead song. They add unusual atmospherics and a tincture of evil through a myriad of clever touches that make this album a striking and unusually satisfying debut.”

I stand by those words all these years later. Torches Ablaze is one of the few albums from the year of its release that I go back to, which is a mark of its power, given that I spend 99% of my time listening to new things. And this song in particular is so goddamned ingenious that it continues to flower in my head whenever I’m in the midst of people who aren’t normally into heavy metal but are willing to indulge my own interests.

I will add that Arkhamin Kirjasto aren’t moribund. Their last Facebook status appeared in September 2017, but it said this: “We will be back in 2018.” And I fervently hope that will prove to be true.