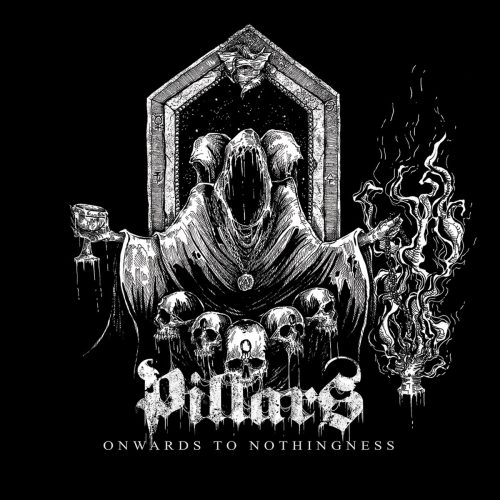 Imagine a sudden, seismic shift in your reality. You find yourself alone on a vast, humid plain, shrouded in mist and littered with bones. Before you looms a giant monolith of granite, a gargantuan tombstone of broken hopes that blots the sun — and it’s disintegrating, with boulder-sized fragments cascading down in a slow-motion avalanche of black destruction. You want to run, but the earth has turned to tar beneath your feet, and begins to heave as the boulders strike like bombs.

It’s an ugly, nightmarish dream from which you awaken in a cold sweat, haunted and shivering. It’s one way (my way) of imagining the visions created by the song you’re about to hear, the name of which is “Swarms From the Swamp” by the French band Pillars. It comes from their debut album, aptly entitled Onwards to Nothingness, which will be released on September 28th by Seeing Red Records. 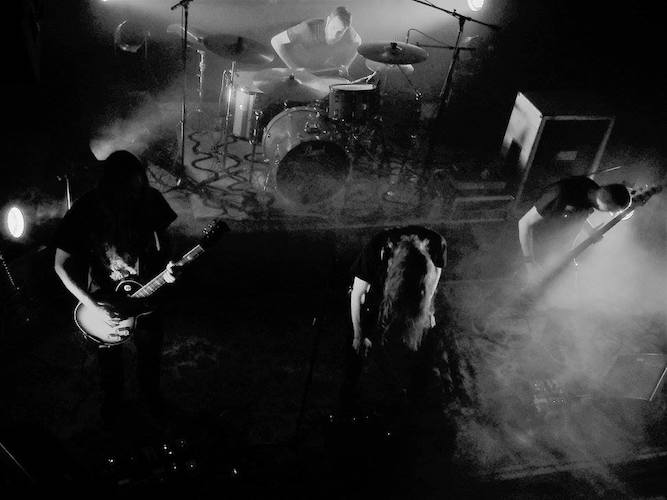 Doom metal comes in many flavors, some of them finding beauty in the dark depths which the music plumbs. On the other hand, as the label here accurately foretells, Pillars “bring only agony and promise only torment”. “Harsh, brooding, and calculated, the music drags your soul through the muck and buries you, your screams a part of the choir of devastation.”

“It was important for us to record the album live in an attempt to recreate the atmosphere of our live shows, as well as trying to sound as dark and heavy as possible.”

And holy freezing hell, did they ever succeed in that goal.

The lurching drum cadence of “Swarms From the Swamp“, coupled with its merciless, massive, heavily distorted lead riff and thudding bass line, create an utterly dismal but fiendishly head-moving experience straight from the start. The hopelessness of the music is intensified by the impact of the vocals, a cornucopia of pain that ranges from somber intonations to piercing wails, from gritty growls to scarring howls, the voice choking with rage and collapsing in agony.

A slithery, skittering, vibrating solo emerges over the slow rumble and tumble of the drums and the bleak bubbling of the bass, like a ghost that has lost its mind — and further solos and leads squall like a torture implement at work on convulsing bodies. With all forces brought to bear, the music becomes brutish and broiling, moaning and mangling. Near the end, the band underline the point (which seems to be that your life has no point) in a finale of catastrophic pounding and wailing — with a final filament of flensing feedback.

Onward to Nothingness is the follow-up to Pillars‘ 2017 EP, Pyres and Gallows. It’s recommended for fans of With the Dead, Bell Witch, Conan, and Moss. It was recorded live in October 2017 at Studios de la Forge, in Nancy, France, and it was mixed and mastered by Pierre Schaffner.

The album’s evocative cover art was created by Axel Zender, and along with our song premiere, you’ll find below a video trailer for the album that shows him crafting the piece.

The album will be released by Seeing Red on September 28, digitally and in a 6-panel digipak edition, limited to 200 copies worldwide.

3 Responses to “AN NCS PREMIERE: PILLARS — “SWARMS FROM THE SWAMP””