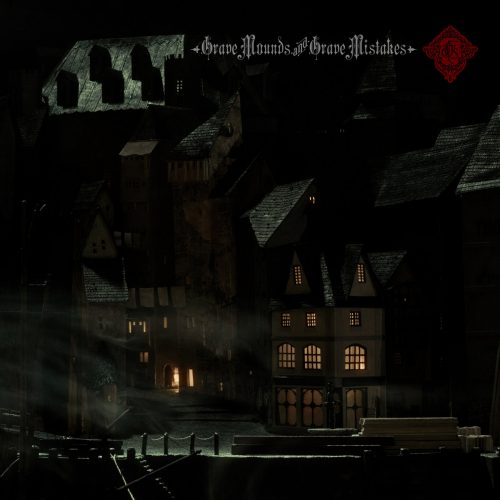 This Sunday’s collection of music validates the title of the series: No two of the songs are very much alike, and they display quite different degrees of “blackening”. If you’re like me, you’ll like all of it; even if you’re not, there’s enough diversity in the music that you’re bound to discover something of interest.

As you can see, there will be a second Part of what I’ve pulled together this week. But the odds are I won’t finish it in time to post it today, and you’ll see it tomorrow instead.

The first single from A Forest of Stars‘ new album (“Precipice Pirouette”) was a glorious extravagance, a 10 1/2-minute pageant capable of carrying the listener away like a leaf in a gale. I said so, and so it must be true. And now we have a second single, with the delightfully loony yet carefully calculated title “Decomposing Deity Dance Hall“. 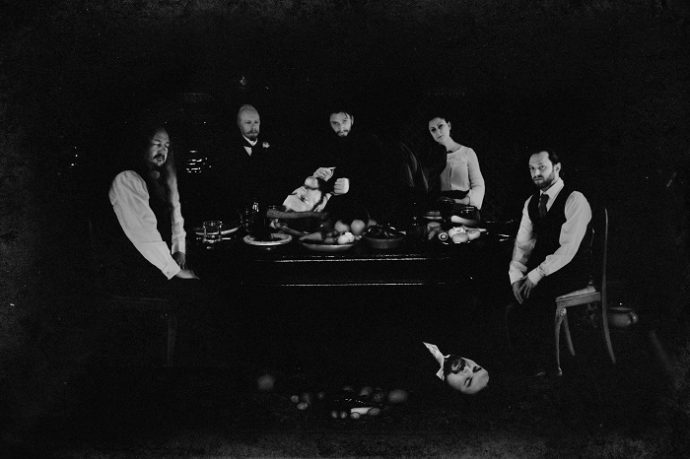 As the band recounted in DECIBEL‘s premiere of the track last week (introduced by ex-NCS writer Joseph Schafer): “This song is a paean to mental, physical and spiritual decay; the idea that if humanity can concoct an iteration of a god, then by extension she can then strip that god of of any misbegotten authority and trample it righteously under foot / hoof where it belongs”.

Oh, but there’s more than trampling here. Rage has only so much to do with this subjugation — it’s a celebratory event as well. The band imagine “an enlightened humanity dancing, upon a mass grave of excommunicated hypocrisy.”

There’s neither rage nor abundant joy at the outset of the song, just a beguiling invitation marked by strings and strumming, and then the gala begins, with music that entwines defiance and fury, lilting beauty and (yes) the whirl of a grand dance to the tune of darting keyboard notes, moody reveries and the exaltation of victory. The vocals, as ever, are riotous and riveting.

The new A Forest of Stars album is Grave Mounds and Grave Mistakes, and it will be released on September 28th by Prophecy Productions.

The press materials tell us that Över “was formed as a result of an immediate friendship between Þórir (Nyss) and 78424331 (Morto, Nihilisticon, Inhottavuus) at the end of the year 2017,” and together they’ve written and recorded a debut album named Facing Transcendence.  Transcendence may come, but in this case only “after a long and tedious journey that is summarized by depression”, and only through drawing upon wells of spiritual strength (the words are Þórir‘s).

The opening track from this debut album, “Philosophy (Supposed Truth)”, could at first be perceived as the soundtrack to an interstellar voyage, but unfolds into a slow and solemn expression of pain. There’s so much searing anguish in the harsh vocals,  so much palpable gloom and piercing heartache in the music, so much penetrating grief in the somber and rising clean voice… and yet there is majesty in equal measure here, and in the shimmering ambient tones a feeling of reaching out and sensing the means of escape from the oppressiveness of our own daily travails.

Another track, “Will”, is also now available for streaming. As its title suggests, this song is (in part) a rushing surge, a furious fight. It contrasts well with the album opener, but also maintains a linkage with it, through ethereal synths that draw unearthly wonders into view, and through the sharp edge of tension and torment that persists through the turmoil and becomes even more pronounced when the pacing relents. There’s a damned infectious riff over a rocking beat that will dig into your head near the end, too.

Facing Transcendence will be released by Avantgarde Music on September 3.

P.S.  You’ll notice in the player below that a third track has surfaced since I first wrote this post. You really ought to listen to it, too! 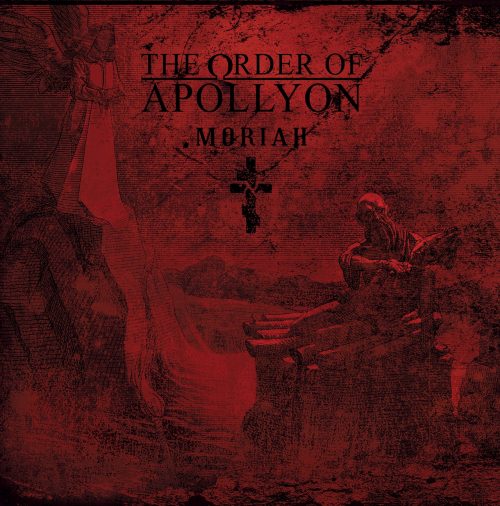 THE ORDER OF APOLLYON

I haven’t completely figured out what was intended by the combination of words and imagery in the lyric video for this next song by the French black/death band The Order of Apollyon. The visuals for “Rites Of The Immolator” include Nazi deathcamps and German forces mounting assaults in WWII, as well as crowded pigs and hanging carcasses. The words invoke the offering of death as a sacrifice to a descending Lord, begging the repayment of Midian with slaughter; the reference to Midian has different potential meanings, one of which is an Arabian tribe of which every male was exterminated by the Israelites under Moses, and all women and children enslaved, supposedly by the command of their God.

I suppose the fact that the video provoked actual thought rather than mere sensation says something good about it, even if some of the thinking was devoted to determining whether this was intended as celebration or a condemnation of Nazi slaughter, or more generally of the abominations regularly perpetrated by humankind under the banner of ideology (I’ve concluded it’s a condemnation).

The music itself is a roaring furnace of battering percussion, febrile bass notes, and dissonant, boiling riffs. It periodically segues into a massively head-moving (though gloomy) rocking passage, and comes out the other side with all sonic weapons firing. The imperious, roaring vocals magnify the intensity of a track that’s damned intense to begin with, and quite memorable as well.

“Rites Of The Immolator” comes from the new album Moriah, which will be released on October 26 by Agonia Records, and represents the first work of the band under a new line-up which includes co-founder, guitarist, vocalist and producer, BST (ex-Aosoth, VI), and new members from Temple Of Baal, Hell Militia, and Merrimack. 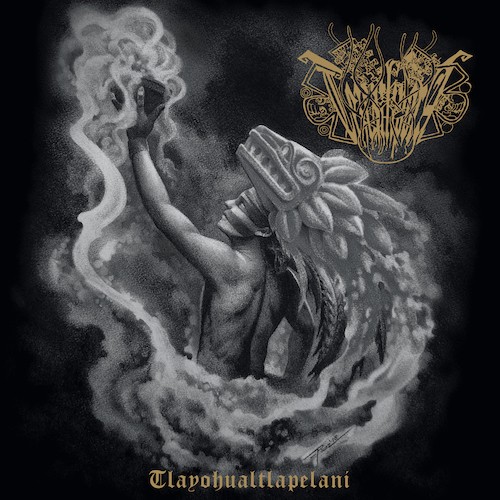 I’ve listened to this next track a half dozen times since I first came across it weeks ago. It overpowers the senses, combining roiling waves of incendiary riffing with striking snare-drum rhythms and deep, thunderous low-frequency rhythms. Enmeshed within this fierce assault are currents of deep, sorrowful melody and heavy, head-moving segments of primal physicality, as well as soaring strains of music that give the song an atmosphere of mythic grandeur, and periodic flute-like notes and tribal drum beats that link the music to its ancient inspirations.

And the inspirations are indeed ancient. The band here is Tezcatlipoca, a Mexican black metal collective whose music is an homage to the Mesoamerican ancestors who once inhabited their homeland, and includes native Mexican musical instruments as well as lyrics in the Nahuatl language. Speaking of lyrics, they’re expressed in vocals that are absolutely spine-shivering in their near-inhuman intensity.

This track, “Huey Tlatoani“, comes from the band’s second album, Tlayohualtlapelani, which will be released on October 19th (CD and vinyl LP) by Iron Bonehead Productions. 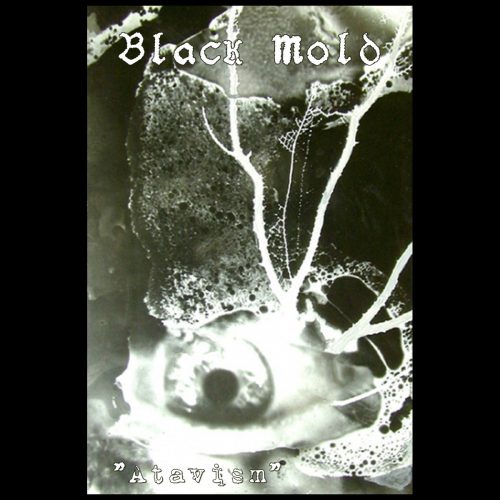 Before I close Part 1 of this week’s column, I thought I’d throw you one last twist of the musical road, as if the foregoing songs weren’t twisting and turning enough.

As they say in the music scribblers’ trade, this track is stripped-down — simple chords, un-ostentatious drum rhythms (with brief flurries in the mix), a bass line that’s locked in with the drums. The riffing loops and loops, with slight changes that darken the mood even further, and the drumbeats scamper for a bit, too.

And make no mistake, the mood really is a dark and depressive one, marked by the kind of coming-apart-at-the-seams vocals that could be perceived as either blindingly enraged or deliriously tortured. But although this mid-paced song might be stripped-down, it exerts a primal kind of attraction, like all good rock ‘n’ roll (even when it’s as sulphurous and as pestilential as this).

The song, “Void Intoxication“, will be included on Atavism, the debut demo of a band named Black Mold. The album will be released on cassette tape by Helldprod Records on October 8th. I don’t know who is in Black Mold or where they’re based.

4 Responses to “SHADES OF BLACK (PART 1): A FOREST OF STARS, ÖVER, THE ORDER OF APOLLYON, TEZCATLIPOCA, BLACK MOLD”