Many metal bands have embraced science-fiction themes for their music, some of them building entire albums around concepts and story-lines rooted in the genre, some original and some taken from existing novels or short stories. But Rapheumet’s Well have dedicated themselves to their own science-fictional narrative arc in a way that’s unusually thorough and immersive.

Over the course of three albums — Dimensions (2014), The Exile (2016), and Enders Door (2017) — this North Carolina symphonic death metal band built an interdimensional, worlds-spanning narrative arc of conflict and perseverance, with head-spinning music that served the mind-bending events of this weird and wondrous tale, which ranges from “the birth of organic matter to great wars that tear the fabric of space/time”. Now the band are returning with The Elder’s Anthology (Special Edition) which includes selective tracks from all three albums, remixed and remastered, and with revised performances, drawing together the segments of the epic saga they’ve created.

To help highlight The Elder’s Anthology, which will be released by Test Your Metal Records on October 26th, the band have created an extravagant music video for the new version of “Witch of Darkspire”, which originally appeared under a slightly different title on The Exile, and we’re presenting that video today. 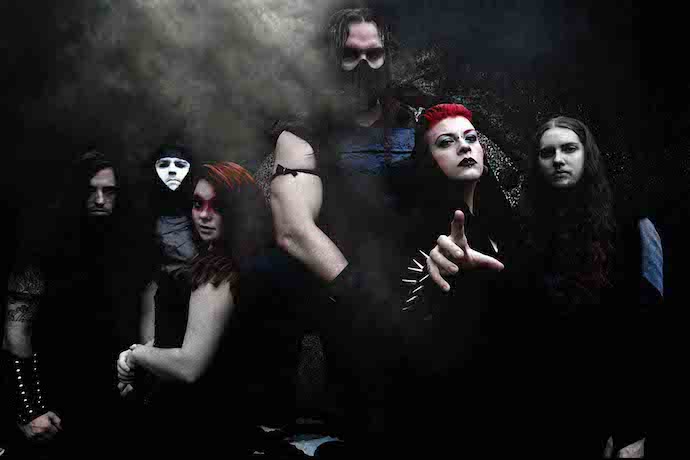 As drummer Joshua Ward explains: “The Elder’s Anthology is a collection of songs (we felt) are important in re-igniting the lore of the previous albums. With new changes and new members, we felt it was important to transpose their skills into the foundation of the band. The Elder’s Anthology is re-mastered with updated guitars, vocals, and baselines and we fell this was appropriate for moving forward with the next full length album!”

The music of Rapheumets Well is recommended for fans of Fleshgod Apocalypse, Septic Flesh, Dimmu Borgir, and Cattle Decapitation, and as those references suggest, their songs incorporate ingredients that range from classical orchestrations and cosmic synths to the extreme weight and barbarism of death and black metal. “Witch of Darkspire” is a fine example of this sonic alchemy.

Like the accompanying video, the song is itself extravagant, a multi-layered and multi-textured track that’s ominous and haunting, warlike and grandiose, harrowing and hallucinatory, sinister and savage. Its pulse-pounding energy and strange atmosphere derive from the combination of hammering percussion and eerie ambience; imperious riffing and fiery, flickering leads; darting, rippling keyboards and delirious soloing; and a mix of barbarous growls and soaring soprano vocals.

The video combines footage of the band performing and richly imagined scenes from the story narrated in the music. We’ve got two versions of the video, one that includes brief nudity and a censored version without the bare boobs (not because you need protecting, but in case you have trouble viewing the first one for some reason).

In addition to useful links and both versions of the new video, we’re also including a stream of the first single released in support of The Elder’s Anthology — “The Betrayer“.

One Response to “AN NCS VIDEO PREMIERE: RAPHEUMETS WELL — ‘WITCH OF DARKSPIRE””