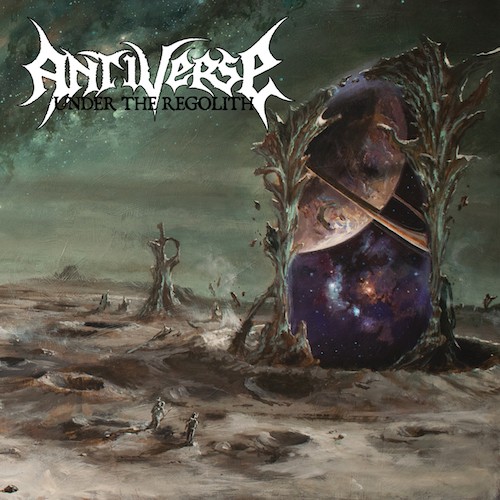 WARNING: Excessive metaphors ahead! I’ve tried to bottle them up, but this blood-boilng, nerve-firing new Antiverse song has forced them from my head like a tsunami. And the song strikes like a tsunami, too. (You, see, the flood has already begun.)

“Black Waves of Sorcery” is a full-on blast furnace of mad-thrashing intensity and explosive instrumental and vocal exuberance. As speedy and as thrilling as a rocket-powered roller-coaster, as vicious as a pack of racing wolves, and as imperious as trumpet fanfares and whipping banners soaring above a galloping war charge, the song could bring the dead to life, cackling with glee. But there’s a hidden, darker dimension to the track, as well as to the album that includes it (Under the Regolith, which is set for release on October 19th by Seeing Red Records). 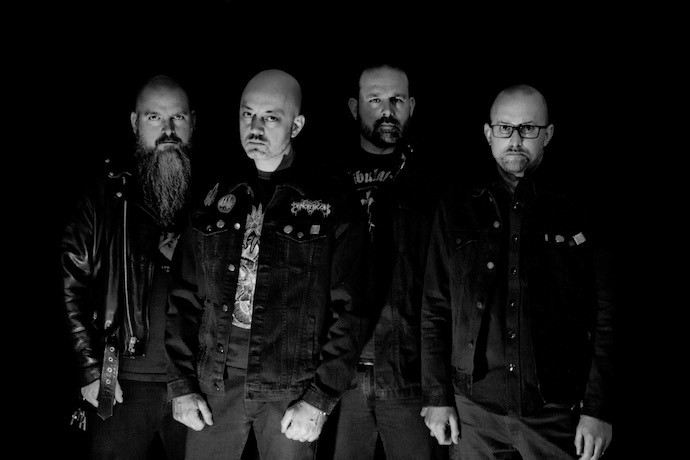 This Minnesota band was founded in 2013 by guitarist/vocalist Carl Skildum (of Inexorum, and a live member of Obsequiae), bassist Jason Bauer, guitarist/vocalist/keyboardist Matthew Kirkwold, and drummer Mike Paradise. They released their debut album, Cosmic Horror, roughly four years ago. Between then and now, the band parted ways with their first vocalist, leaving Kirkwold and Skildum to share the vocal duties (and as you’ll hear, they kill it), but there have been other intervening developments that are much more devastating.

Specifically, during the writing and recording of this new album the band received the terrible news that bassist Jason Bauer was facing a stage-4 cancer diagnosis. Despite this tragic and frightening turn of events, Bauer has continued to write, record, and perform with Antiverse. And along with his bandmates and other friends and family, Seeing Red Records has also supported his battle, committing to contribute money from every digital download or CD purchased via the label’s Bandcamp page to contribute to the cost of Jason’s cancer treatment.

Realizing what Jason Bauer is now confronting gives added poignance to the experience of this new song, which simply blazes with near-uncontainable vitality. Launched by slashing guitars, it takes off in an adrenaline-triggering gallop of blazing and rapidly skittering riffs, vertebra-fracturing drumwork, viciously scalding howls — and basswork that’s impressively nimble and also warm in its tone. Brazen melodies blare forth; the vocals overflow with molten fury, and then the song segues into a burst of jolting and jabbing guitars over a skull-busting rhythm.

A song like this deserves a solo that’s a white-hot, eye-popping fireworks display, and it gets one — but this thrill-ride doesn’t end there. A big, hammering bass bridge over a slow, queasy guitar melody leads into an imperious stomp with trumpet-like blasts of guitar sound and absolutely livid shrieks — and you’ll encounter a few eerie, dreamlike reverberations to bring this breathless romp to a an uneasy close. 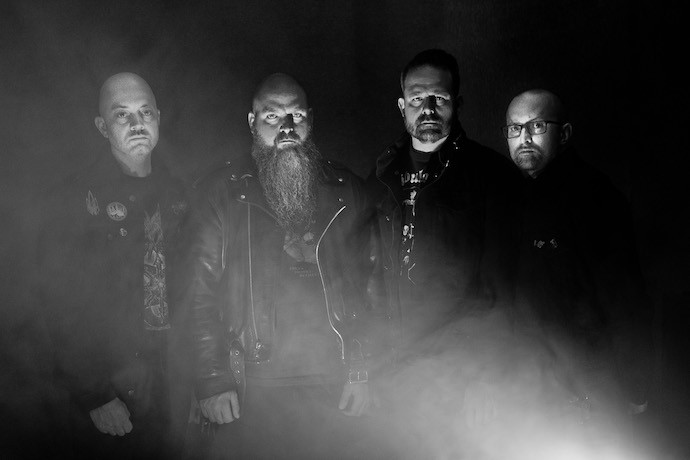 The song will no doubt inspire all sorts of imaginings among listeners, but here’s Carl Skildum‘s description of what inspired it:

“‘Black Waves of Sorcery‘ is a thematic continuation of a song from our first album (“Novamancer“). Both follow the exploits of a mad mage with unchecked power. This song is probably the strongest connection between the two albums and it felt pretty natural to imagine that this character survived the cataclysmic events of his first ascension and is now decimating foes in a new realm. I’ve always enjoyed it when bands have a connective thread between albums, so there’s a quick little reprise of the “Novamancer” theme in the piano riff at the end of the song. I wanted the song to have a really strong nod to first-wave black metal and early raw thrash and speed metal, and the visuals of this mad sorcerer floating above battlefields, leveling mountains and summoning abominations seemed appropriate to match the aggression of the song.”

Of the album as a whole, Seeing Red Records makes references to early Megadeth (especially Rust In Peace), “alien-era” Hypocrisy, hints of latter-year Dissection or even Naglfar, and even Chris Amott‘s solo project, Armageddon, particularly the album Crossing the Rubicon.

Under the Regolith was recorded in Minneapolis at Null Studio and Rumble Studio; it was produced, mixed, and engineered by Matthew Kirkwold; and was mastered by Alan Douches at West West Side Music. The album art was created by Adam Burke, and the “Black Waves of Sorcery” illustration was crafted by Nate Burns.

Enjoy our premiere below, where you’ll also find a stream of a previously released track, “Hallucigenia”.

4 Responses to “AN NCS PREMIERE: ANTIVERSE — “BLACK WAVES OF SORCERY””