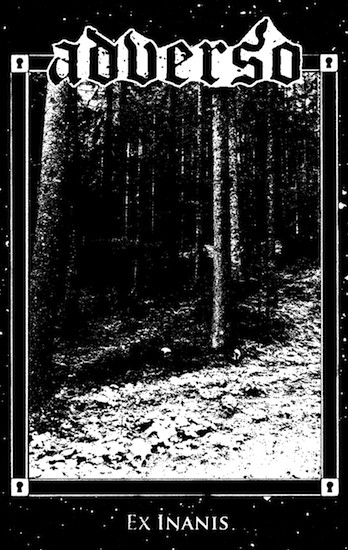 Black metal isn’t a linear axis, with more of “this” on one end and more of “that” on the other, or a spectrum whose shades move smoothly through varying degrees of deepening darkness. Perhaps a better analogy would be a constellation of moons in differing elliptical orbits around a hostile, burning planet with chaos at its core.

Adverso’s new demo, Ex Inanis, tends to provoke such cosmic comparisons. Unmistakably, there is chaos at its core, and in its own orbit it travels in a ranging course toward ever-freezing reaches of isolation and hope-extinction but also looping inward toward the heart of its energy, crossing into dimensions where flames of dangerous glory heat it to a vibrant shine. But it might just as easily be taken as a merciless mirror to the inner turmoil, torment, and aspirations of a single soul. 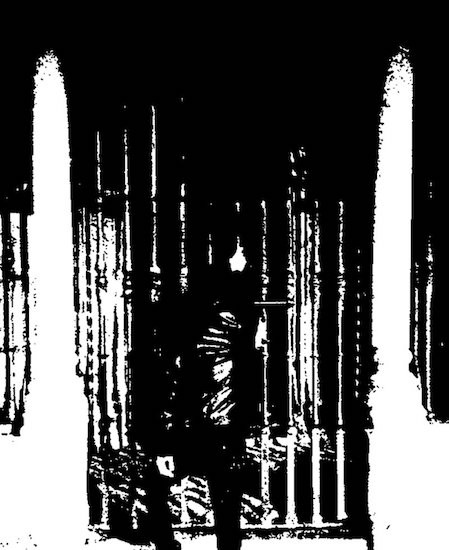 These four tracks by this anonymous Portuguese entity could be dissected into simple ingredients, which are combined unostentatiously but with powerful emotional consequences. It is, above all, a riff-driven album, and therein lies the power of the music. Each track sets up a repeating sequence of dominant riffs laced with complementary leads and girded by a particular drum rhythm, and then changes to a different musical and rhythmic pattern.

The guitar tone is vital to the impact, processed through a slurry of distortion that makes the sound oppressively dense and harrowing, vibrating with a high degree of abrasion. The drums leap from these thick, senses-saturating chords and notes with stirring vitality, though the bass is a more dark and subdued, but still noticeable, presence. The vocals seem both human and inhuman, a mix of scalding, ear-shredding howls and long, reverberating cries of terrible pain or crazed ecstasy.

The blueprint of the music might be easily seen and understood, but the completed edifice of Ex Inanis is something more impressive than a sketch of those simple lines might suggest.

The sequence of “Adventus” begins with a torrent of remarkable vibrancy in which furiously battering blast-beats drive beneath a dense wash of boiling, scarring riffs that create an emotional resonance which combines an unearthly shine and morbid reflections, briefly becoming more desolate and deranged — until the drums disappear, giving way to calamitously dismal chord reverberations, which almost seamlessly transition into the slow and solemn drum rhythm and hammering, head-nodding chords that begin “Consummatio“. These are the heavy, heart-aching sounds of hopelessness, and resignation to a doomed future.

When “Consummatio” begins to change, as all the songs do, moody and mesmerizing notes ring like malformed funeral bells over a slower percussive rhythm until the drums begin blasting, and the riff suddenly heats to a frenzied volcanic boil which, combined with a twittering lead, manifest tension, confusion, and the paralysis of reason.

Unnerving vibrations radiate from the mind-warping notes which begin “Desiderium“, a brief prelude to the drum-surge of pummeling fury, and the rise and fall of tremolo’d riffing, channeling a changing expression of what might be yearning mixed with pessimism, faint hopes combined with the oppressive teachings of past defeats.

It’s the final track, “Praeteritus“, where Adverso’s moon loops inward in its orbit, closer to the chaotic sun. There’s a measure of joy and a feeling of freedom in the glorious, hook-heavy riff and fiery, soaring, defiant lead at the outset of this song, although it’s still undeniably a heavy, shaggy beast, with a more measured stalking, head-moving cadence. You know by now that there will be a change, and when it comes, the drums bolt into a blasting and bounding gallop matched to a different dual-guitar riff that becomes a whirl of perilous ecstatic mayhem, a musical bacchanalia in which chains have been cast off and blood will be shed before the song returns to its opening refrain.

At roughly 22 minutes in length, Ex Inanis is compact — it seems exactly the right length, and the songs seem to flow in exactly the right way, to make this a very satisfying experience to enjoy straight through, without interruption. And that’s the way the music stream is presented below, without breaks. However, here’s an index, should you try (foolishly) to jump around:

Ex Inanis will be released on cassette tape (limited to 80 copies) by Purodium Rekords, with a release date of October 15th.