(In this November edition of The Synn Report, Andy combines reviews of the four albums released to date by UK devastators Spearhead, including their new album Pacifism Is Cowardice, released one week ago by Invictus Productions.)

Pulling no punches and taking no prisoners, Spearhead have been weaponising their particular brand of Blackened Death-Thrash for almost fifteen years now, and have produced four utterly ferocious albums during that time, the most recent of which – Pacifism Is Cowardice – came out just one week ago, following a seven-year gap between records.

And while the quartet – now made up of founding bassist/vocalist Barghest, long-time guitarist Invictus, and new members Typhon (drums) and Praetorian (guitars) – clearly have a deep, abiding affection for the classic, old school style(s) of Extreme Metal, you’ll soon see/hear that their latest record in particular aims for more of an ageless, enduring sound than some sort of uninspired throwback.

So gird your loins, brothers and sisters, and follow me once more into the breach! 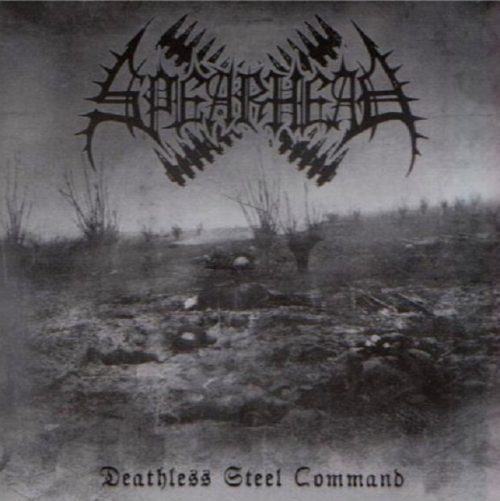 Erupting out of the speakers like a gout of napalm, the album’s first proper track (not counting the synths ‘n’ samples intro “Ornamentum”) is a ravenous Black/Thrash hybrid by the name of “Operation Overlord”, and serves as an immediate and impactful introduction to the band’s straight-for-the-throat style of martial metallic extremity.

“Violated Purity” adds a dash of Vader-esque riffery to the mix, along with some dizzyingly thrashy soloing, although the vocals maintain the same cadaverous croak as ever, following which the title track (despite a rather thin and trashy snare sound) finds drummer Vortigern unleashing a withering hail of blastbeats even as guitarists Hemah and Nephilim punctuate their usual salvos of savage riffage with some moments of honest-to-god groove.

“Stormbearer”, the album’s shortest (and possibly sharpest) song thus far is an absolute riffmonger’s delight that finds the quartet at their most unflinching and intense, while “The Glorious Dead” (the album’s longest song) shakes, rattles, and rumbles along for just over five minutes in a glorious display of thrash-propelled riffs and snare-beaten shrapnel, topped off as always with Barghest’s shrieking, venomous vocals.

With “Destroying the Law of Jahweh” the group settle into a rougher, more deathly sound, that sits somewhere between Vader and Belphegor, all big, chugging riffs, scything tremolo runs, and seething barrages of brittle blastbeats interspersed with the some surprisingly doomy moments (as well as one squalling air-raid siren), after which “Dominion” introduces a touch more melody into things with its wickedly dark introductory guitar refrain, lashings of blackened tremolo work, and cascading climactic solo.

Closing out with the dual-deluge of “Nuclear Imperator” – a song exactly as devastating as its title implies – and the moody instrumental strains of the aptly-named “Aftermath”, Deathless Steel Command may not be the most original or groundbreaking album ever released, but there’s just something about its raw, relentless energy that makes it an irresistible listening experience all the same. 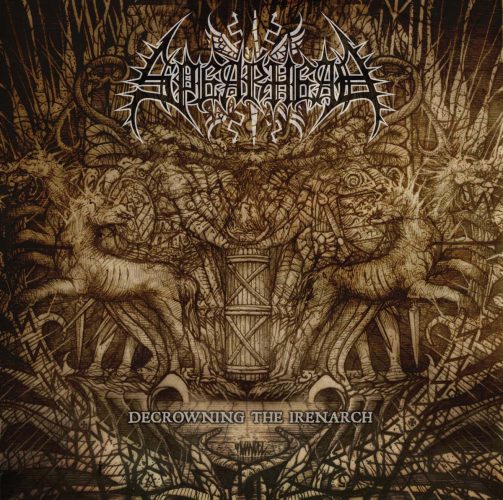 The band’s second album, widely held up as their best (though I’m perhaps a tad more fond of Theomachia), begins with the atmosphere-enhancing sounds of “Prolegomenon” which seem purposefully designed to lull the listener into a false sense of security before the title-track – all threshing, thrashy riffs, pounding percussion, and savage, snapping vocals – bursts out of the speakers at a neckbreaking pace.

With an altogether crunchier, harder-edged guitar tone, as well as a significantly punchier and more precise drum sound, songs like the galloping Death/Thrash of “When The Pillars Fall” and its even chunkier, more technically-twisted companion “Road to Austerlitz” showcase a band that’s taken several steps towards a bigger, burlier, and more deathly sound, although the throat-scorching snarl of vocalist/bassist Barghest ensures that (along with the band’s profligate use of scalding tremolo runs) the group’s blackened roots aren’t going to be abandoned or forgotten any time soon.

And although the stage-setting intermission of “Interregnum” isn’t necessarily the most vital track on the album, the band’s use of the infamous “Cry Havoc!” speech from Julius Caesar (performed here by the legendary Marlon Brando) certainly adds to the thematic richness of the record, particularly as it swiftly and succinctly leads into the strafing blastbeats and sharp-toothed riffs of “Iulianus Augustus Apostata”.

The Witchery-meets-Goatwhore gallop of “In The Face of the Absolute” packs in a hell of a lot of chunky chuggery and furious fretboard fireworks over the course if its five-and-a-half minute run-time, while also finding some time to indulge in a bit of menacing melody as well, before crashing explosively into the blasting bombardment of “Thus Always To Tyrants”, which is arguably the album’s best (and most punishing) song.

The martial snare, marching riffs, and ominous lead refrain which opens “Mors Triumphalis” showcase the band’s newfound willingness to employ a little more patience, drawing out the tension and allowing the anticipation to build before finally striking with all the speed and savagery of a viper, after which the devastating Death Metal riffs of “Brotherhood of Arms” and the extravagant soloing of “Aftermath” (the second in what will be an ongoing series of instrumental outros) wind things up in suitably tumultuous and triumphant fashion.

The sheer intensity with which the band kick off the Vader-meets-Morbid–Angel-esque opening duo of “Eschatos” and “The Lie of Progression” is a clear sign of things to come, with the beefier production giving every bristling, electrified riff and punchy, pugilistic drum pattern a much greater heft and an even sharper edge, while the vocals (having developed an ever deeper and darker tone) remain as raw and ravenous as ever, howling out of the speakers in a blazing torrent of righteous rage and fury.

“Kshatriya” is, if anything, even more intense, rampaging its way through just over three minutes of blasting snare, scything tremolo, and chunky, choppy axe-work that pummels away at a truly vicious, unforgiving velocity, with the occasional hellfire hook or bludgeoning groove added into the mix for good measure.

Fans of Angelcorpse and Azarath will be pleased to know that the crushing, constricting riffs of “Perdition Tide” are just as ugly and unrelenting as anything either of those bands have ever produced, while “Polemos Pater Panton” finds Spearhead opting for a more rhythm-and-groove focussed plan of attack, which not only serves to induce the irresistible urge to bang one’s head, but which serves to make the periodic eruptions of scatter-bomb blastbeats even more effective when they detonate.

Imperious instrumental “Praesagium” adds a dash of martial grandeur to the proceedings before “Herald the Lightning” lays down a withering barrage of high-calibre riffs, heavy-bore hooks, and hammering drums, after which the Witchery-sounding strains of “Prey to the Conqueror” showcases the band at their catchiest and hookiest, all without trading in any of their signature lethality.

“Autocrator” is three and a half minutes of spasming, neck-snapping rhythms and flagellating percussion reminiscent of Impiety at their gnarliest, which culminates in a mix of shameless, squalling soloing and bruising, belligerent grooves, while “To Slake The Thirst of Ages” initially seems set to follow suit with its own gut-wrenchingly groovesome opening bars (replete with some fleet-fingered lead guitar work), before it shifts its targeting matrix to deliver salvo after salvo of pinpoint blastery and voracious vocal venom.

Concluding with the atmospheric instrumental of “Aftermath” (an even more dissonant, and yet also more melodic, version of the band’s traditional outro), Theomachia is yet another successful campaign from these British bulldogs, and yet another impressive feather in their cap.

Despite a seven-year gap between records, and a significant line-up shift in the meantime, Pacifism In Cowardice immediately demonstrates that the band haven’t lost an ounce of primal power, as “Of Sun and Steel” immediately sets about levelling the surrounding area with a ferocious fusillade of napalm-strength riffs and chattering blastbeats that errs even further towards pure Death Metal brutality than ever before.

The sheer tightness of the riffs and the even thicker, bassier production (not to mention Barghest’s increasingly more guttural vocals, which at times give the album an almost Mithras-like feel) definitely makes Pacifism… a contender for the group’s heaviest album yet, and tracks like the neck-wrecking “Ajativada” and the breathtaking mix of massive grooves, molten metallic fury, and unexpected melody that is “Wolves of the Krypteia, We” only serve to emphasise just how destructive and dynamic this latest incarnation of the band are.

“Violence Revolt Ruination” is a ruthless blastathon which hearkens back to the band’s earliest, rawest roots, while also incorporating a hideously groovy, bone-grinding climax just to sweeten the deal, after which the ominous, synth-driven ceasefire of “Hyperanthropos” allows the listener a few minutes to catch their breath before the carnage resumes in earnest with the hammering heaviness of “Degeneration Genocide”.

The serrated, sharp-toothed riff work of “The Elysian Ideal” cuts through any fatigue the listener might be feeling with an almost electrifying energy, driven by Typhon’s titanic blasting and topped off with a bevy of bellowing vocals and screaming Slayer-esque solos, before the stomp and blast, sturm und drang, of “A Monarch to Rats” and the sheer sonic savagery of “Khan” step in to mop up any survivors.

Climaxing with the stunning “Aion (Two Keys and a Lion’s Face)” – which proves once and for all that a little melody goes a long way towards enhancing the band’s inherent brutality – and the imperious instrumental of “Aftermath”, Pacifism Is Cowardice shows that pure devastation trumps innovation 100% of the time.

One Response to “THE SYNN REPORT (PART 103): SPEARHEAD”