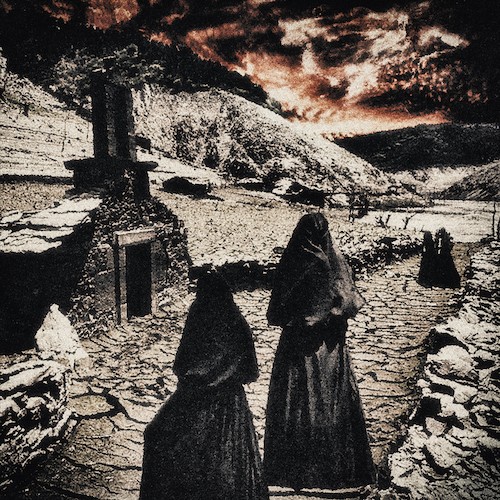 As you prepare to begin listening to this album, imagine finding your seats with other members of the audience in the midst of a blasted concert hall, surrounded by the ruins of a dead civilization (your own), beneath a roiling red sky streaked with cascading black clouds. Soon you will be enveloped by dense waves and gales of sound, as Se Lusiferin Kannel perform four larger-than-life symphonies of Luciferian exaltation and lunacy, apocalyptic catastrophe, and the heart-ache of death and desolation on a massive scale.

These four compositions, each of them as long as an EP, make up the body of Valtakunta (a Finnish word for “kingdom”), the 71-minute debut opus of these mysterious visionaries. It was first self-released digitally in October 2017, but on February 1st it will be presented by Signal Rex on CD and double-LP vinyl formats, remastered by Stephen Lockhart at Iceland’s Studio Emissary and featuring new cover art by Heresie Graphics.

In broad strokes, the music is a form of atmospheric black metal, but the label really doesn’t tell you very much (does it ever?). Yes, the music creates intense moods and frightening visions, with sweeping symphonic keyboards in place of noticeable riffs, but the methods employed by Se Lusiferin Kannel in creating these ravaging vortices of dystopian sound aren’t commonplace within the sub-genre.

The four tracks are much more alike than they are dissimilar. Everything takes place in a dense haze of distortion. The drum rhythms change, becoming more or less maniacal (they’re set way back in the mix but you know they’re there — you can sense the changes in their energy, and you can feel the difference when they fall silent) — but everything else is unrelentingly intense, as all-enveloping as a massive cyclone. The songs flow into each other, separated only by moments of whining feedback and ambient drift.

For some listeners, 71 minutes of these end-of-the-world soundtracks will be a test of endurance. For others, it will prove so damned gripping that listening will feel like being nailed in place, unable to move, overwhelmed by the unchained extravagance of an emotionally shattering experience.

The early minutes of opener “Edes vedet eivät saa rauhaa” bring to mind an overture to a symphony, with the boom of timpani and discordant blasts of brass-like sound interrupting almost-inaudible ambient sensations that resemble rushing water or wind. Without warning, waves of abraded, moody melody begin to cascade slowly over dim, rapid-fire drum blasting. Panoramic symphonic melodies appear when the drums become less maniacal, as do a den (and a din) of distorted voices.

Over the course of the first track and the next three, all those changing vocal expressions become the most unsettling aspect of the experience. Both demonic and angelic, they range among horrible imperious roars, the sound of strangled gagging, throat-slitting shrieks, reverential choral chanting, soaring celestial voices (both ecstatic and solemn), and delirious proclamatory cries.

The dense sweep of the music itself ranges across changing atmospheres within each track, summoning the stateliness of a funeral march, the grandeur of an infernal coronation (a grandeur conjoined with fear), the carnage of beasts tearing each other to pieces in a mass blood-letting, a ritual of abasement before monstrous power, the manifestation of a thousand sufferings.

The symphonic melodies climb high arcs of blazing grandiosity and glorification, yet even when soaring and shining, they often convey sensations of fearsome strength and mortal peril, and at times seem shot-through with sanity-shattering levels of panic and pain. But these vast movements of sound also include sweeping laments of terrible grief and heart-breaking beauty. The sounds of a theremin also surface again and again, its weird, searing vibrations giving the music an even more eerie and unsettling cast.

The only real subsidences come at the end of each song, usually brief, except in the last track “Auringon valtakunta” (“Kingdom of the Sun”) — the most terribly grief-stricken, and probably the most moving of all these performances — when the distant drift and swirl of ambient sounds arrives with nearly six minutes left. If you make it all the way through to that point, you’ll probably be grateful for the chance to gradually begin breathing normally, to let your pulse lower back to a resting state, to begin getting a grip on your sanity again before silence descends.

Signal Rex recommends Valtakunta for fans of such bands as Paysage d’Hiver, Darkspace, Evilfeast, and Bekëth Nexëhmü. We’re told that Se Lusiferin Kannel are at work on a second album. You can pre-order this first one now, in advance of its February 1 release date.

4 Responses to “AN NCS ALBUM PREMIERE (AND A REVIEW): SE LUSIFERIN KANNEL — “VALTAKUNTA””