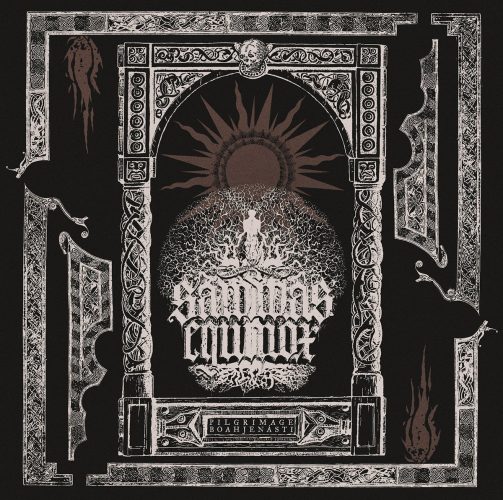 On February 1st — tomorrow — Signal Rex will release a compilation of the two demo tapes previously released by the Finnish black metal project Sammas’ Equinox. This new edition, which combines the names of the demos — Pilgrimage / Boahjenásti — includes remastered sound courtesy of Moonsorrow’s Henri Sorvali, and has been captured on CD and vinyl LP formats, with artwork and layout by Álex Tedín at Heresie Graphics.

Today we’ve got a full stream of the compilation, beginning with the four tracks from Pilgrimage (2016) and concluding with the three from Boahjenásti (2017). If you’ve not previously encountered these creations, prepare for an unusual and arresting combination of haunting, horrifying, and hallucinatory atmosphere, primal physical thrust, and affecting strands of melody, with the excursions overlaid by a voice that’s nasty as hell.

The four tracks from Pilgrimage begin with one of two “bookends”, an introductory piece of ambient music that is indeed haunting — and tension-building. An amalgam of droning, skittering, warbling, and moaning tones, it’s also laced with rippling acoustic strings and high streamers of otherworldly sound that add a degree of mesmerizing brightness to the unsettling mood.

From there, however, you’re quickly enveloped by “Hyperborean Pilgrimage”, an abrasive haze of seething, boiling riffs coupled with a rocking, head-nodding drum rhythm, and throat constricting goblin shrieks and crackling snarls. The voice is vicious; the atmosphere of the music is ominous, bleak, and cruel; and those rhythms are compulsive, even when they begin to hammer in a hurry and erupt in bursts of acrobatic athleticism.

“Streams of Apollo’s Blood” presents a contrasting experience, one that’s rough and raw, stripped-down and carnal, black-eyed and brutal. The riffs are primal and thrusting, and also dismal and queasy, backed by punkish pounding percussion and battering drumwork as well.

The comes the other bookend (“Outroduction”), another ambient piece, but this one telegraphs a kind of hungering demonic horror, freakish and frightening enough to put the hair up stiff on the back of your neck.

The following year brought Boahjenásti, the other piece of this compilation. From the first song, “Shores of Pohjola”, you discover a similar approach to production of the sound — the riffs are still lo-fi and abrading, the drums still organic and physically potent, the voice still a skin-shivering fury. With a vibrant bass dynamic, the music here is moody and almost dreamlike in its shimmering effect (yes, the music seems to shimmer and dance, and to beguile the mind even though it’s shrouded in distortion and even though it becomes a haunting sonic wraith by the time it ends).

Just as the first demo provided contrasts within an overarching ethos, so does this one. And thus “Fávdna’s Arrow” is a slow, lurching and stomping piece with chords that jab and chug, creating a mood of sinister gloom that becomes even deeper and more immersive as the minutes pass and ambient ingredients surface — before the song takes off in a conjoining of thundering drums and rampant riffing that sounds both cold-hearted in its malice and delirious in its savagery.

The path turns again with the last track, “Kuolonhenkäys”, signaled by the reverberation of strummed and plucked strings against a wash of disturbing ambient sound and the methodical, ritualistic pounding of the drums. Here, the voice is a strange half-speaking, half-singing expression. There’s an almost narcotic quality to this particular nightmare — and the song grows even more nightmarish as the drumming becomes more intense and the wash of guitar and electronic sound becomes more searing and ethereal before the music goes off into a chilling astral drift.

If you’d like further clues to the sound, the publicity from Signal Rex refers to “the stultifying rawness that has come to mark much Finnish black metal in the post-Strength & Honour landscape”, but also notes the “uniquely atmospheric aspect” of Sammas’ Equinox, “both in the band’s bittersweet melodicism and their deftly subtle approach to sound layering”.

As noted the album will be released tomorrow on CD and vinyl, and it’s available for order now: