There’s probably someone out there who was thinking, “Is this list STILL not finished? It’s the middle of fuckin’ February — when is that lunatic going to stop?” And then that someone saw the title of this installment and thought, “Oh wow. Didn’t realize he hadn’t gotten to Obscura or Soreption yet. I guess it’s okay if he goes on for a bit longer.”

All of us here were big, big fans of Obscura’s latest album Diluvium — and it seems like everyone else who listened to it felt the same way. In his review, Andy recognized it as “the culmination of a decade’s worth of work and growth by this ever-evolving entity” and considered it home to “some of the most nuanced and natural-sounding songs of the band’s career” — “another win for Obscura, as well as a more than fitting conclusion to their epic endeavour” (it eventually made Andy’s list of the year’s Great albums).

For his part, DGR (in his year-end write-up) also thought the album was great — “predictably dense, but not in the stuffed-to-the-gills way that a lot of tech-death albums have been, but more because this was an album that really saw Obscura exploring their chosen sound” — and gave it a very high recommendation. 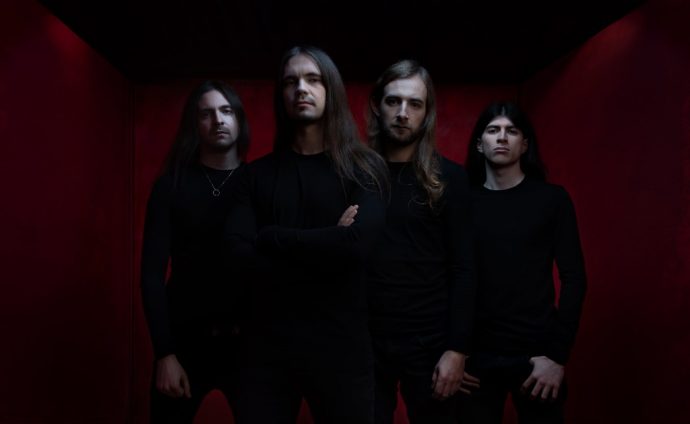 Obscura, of course, stands in line behind no one when it comes to the creation of technically mind-blowing instrumental extravaganzas, and there are beats and notes galore in “Emergent Evolution” (though not as many as in other tracks on this album), generated with mystifying precision and a lot of jittery, high-flying energy. But it’s the mesmerizing and dreamlike melodies in the song — including (gasp!) the soaring clean vocals, the swirling leads, and the fluid and flaring solo that emerges when the frenzy abates — that keeps the track in my head.

It’s such a glorious experience, and I never had any question that it would be included on this list.

Like Obscura’s most recent album, Soreption’s Monument of the End was another one that engendered considerable enthusiasm among all of the core NCS writers, including myself. As DGR wrote when he put the album at No. 30 in his year-end coffee-table book:

“Firmly entrenched in a mid-tempo grind, Soreption are the masters of creating a headbangable groove within their genre, so although they may not be impressing us with the no-notes-left-behind approach, the ultra-precise way in which they just seem to nail their crawling, otherworldly riffs with absolutely no effort continues to stun.”

Meanwhile, in his review Andy called the record “one hellishly heavy, technical tumult of top-quality Death Metal, which continues to place a major emphasis on riffs — humongous, jagged, angular riffs that chug and churn, twist and turn, like a nest of mechanical vipers – over shameless shreddery.”

Yes indeed, Monument of the End was a real monster of an album. In choosing a song from it for this list, I eventually gave up arguing with myself and deferred to DGR (because Andy is always mum when it comes to ideas for this list), who favored “Children Of The Automaton” because he super loves the way the title is chugged out alongside the guitar in the chorus. To quote myself (finally!) after I first heard the song:

“Prepare to have your brain teleported into a blender set to puree, or into an unstable centrifuge that’s whipping around while affixed to a rocket-propelled roller coaster. Machine-precise, turn-on-a-dime, highly destabilizing decimation… that’s what you get here”.