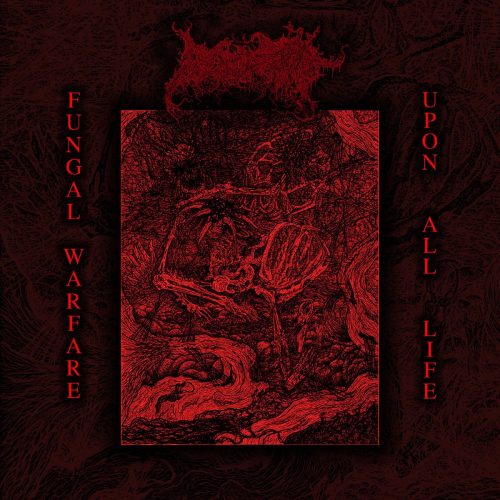 The title of the debut EP by Philadelphia’s Blood Spore — Fungal Warfare Upon All Life — manifests some of the dominant sensations of the music: It is as poisonous and uncontainable as an outbreak of black mold; it is as savage and slaughtering as a mechanized assault of heavy-caliber armament; and it is as cruel and nihilistic as a portrayal of world-ending calamity. But these aren’t the only sensations to be found within the three tracks on the EP, and the music’s rampant dynamism is a big part of what makes this such a striking debut.

Fungal Warfare Upon All Life is being released digitally today, with a CD release coming in short order, and to coincide with the release we’re presenting a full stream along with a review. 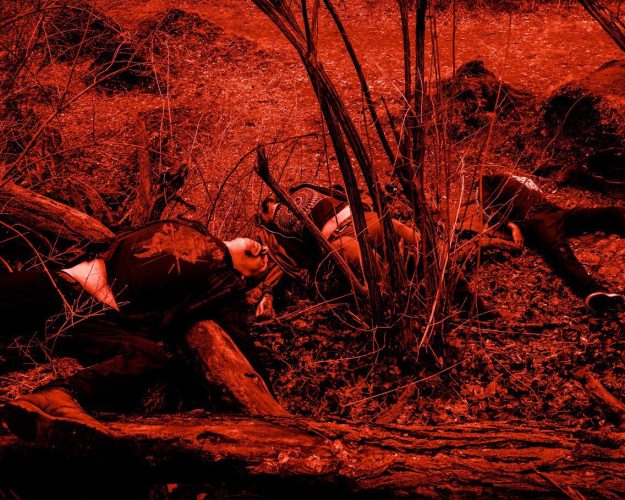 A powerful penchant for continually changing tempos, riffs, and moods is a hallmark of all three tracks, along with a penchant for amalgamating death metal, doom, and black metal; an impressive level of instrumental skill; and truly horrifying vocals.

All of those qualities are on display in the opening song, “Hostile Fruiting Bodies“. It begins slowly, combining massive, corrosive chords, pounding bass, and clobbering drums, and then the guitar begins to drill in a cold, seething whirr as the vocalist enters the frame with raw, scorching screams. The drummer begins to blast and boom, the riffing becomes increasingly sadistic and cutting — but then Blood Spore begin to alternate those sequences with others in which they shift to a punk-like romping cadence and bounding guitars. The riff becomes a jolting thing, the bass becomes a lumbering presence, and the music transforms into a heaving, moaning, and groaning monster. But there’s still more to come — including a jabbing riff that lays the foundation for a rapidly slithering solo and bruising guitar work accented by screeches of string torture.

You can begin to imagine what Blood Spore might do if they allowed themselves a bit more room, which is what they do by following that five-minute opener with the 7 1/2 minute “Cede To The Saprophyte“. Blood-freezing gloom descends at the outset of this song through the pealing of a queasy, misery-steeped arpeggio and a ritualistic drum rhythm. Giant bass booms and pounding drums, coupled with wretched chords, deepen the music’s atmosphere of hopelessness But that mood of utter despair morphs into one of hateful destructiveness as the band hammer and scythe. They also introduce a big headbanging groove, which in retrospect is just a tease, because moments later the whole thing collapses into a pit of doom — only to surge into a galloping and cantering pace with frantic buzzing guitars and a swirling, flamethrowing solo. And the band continue to demonstrate their proclivity for pushing and pulling the energy, mixing vibrant, angular fretwork and crushing, gloom-shrouded heaviness.

The final track, “Apex Colony“, is also a long one at nearly 8 minutes, and is just as lavish a smorgasbord of extreme sounds. Where the preceding track began with a heavy dose of death-doom, this final assault starts with a massive stomping riff and rumbling drums, followed by a mix of immense percussive jolts and bursts of deranged tremolo’d frenzy, and then ramps up into a melee of battering drums and darting, chainsawing strings. The violence continues with a catastrophic stomp followed by an electrifying assault of somersaulting kit-work and berserker guitars — only to have the music collapse into a plague-like calamity of toxic, moaning chords, shrieking reverb, glacially paced percussive detonations, and horrific shrieks.

There are plenty of opportunities to hammer your head over the course of the EP, and one of those still lies ahead in this final song. The guitars start viciously seething again — and then jolt and jab as the song rumbles to life in a massive tank-like attack with a savagely snarling barbarian in command; the main mission of this finale seems to be to get you banging your head until it comes off and bounces across the floor. 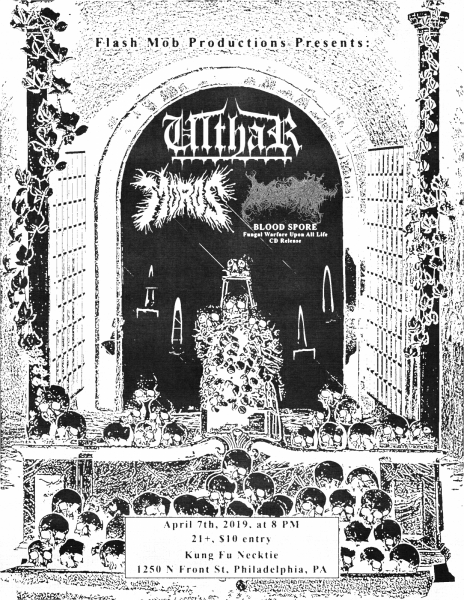 In a nutshell, this is an eye-popping debut by a band that would seem to have a very bright future. And for those in striking distance of Philadelphia, you’ll have a chance to witness Blood Spore on stage very soon. They will be performing a CD release show on April 7th at Kung Fu Necktie, opening for Ulthar and Moros (who are both hellishly good themselves).

The EP (and shirts) are available now via the first link below.

One Response to “BLOOD SPORE: “FUNGAL WARFARE UPON ALL LIFE””