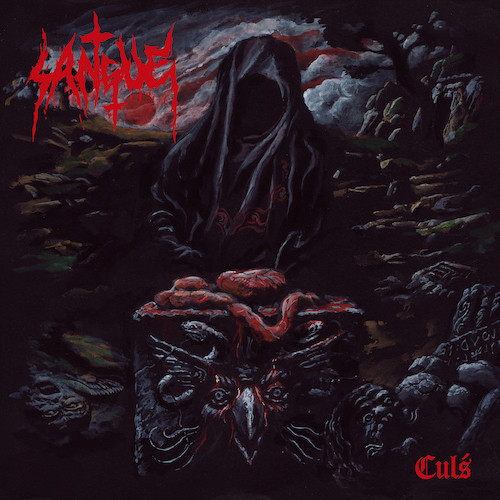 I’m having trouble describing this album, Culś, because it has done something terrible to my mind, which didn’t work particularly well to begin with, but which is now quivering like a mouse in the corner of a small room occupied by a wolf from hell.

Sangue’s music is horrifying, cruel, hallucinogenic, remorselessly abrasive, and crushing. It is a summoning of bestial chaos and wretched catastrophe on a titanic scale. It raises the evil of perverse gods to a pinnacle. It scalds the senses and freezes the blood. It evokes a fight or flight response — but mainly flight. 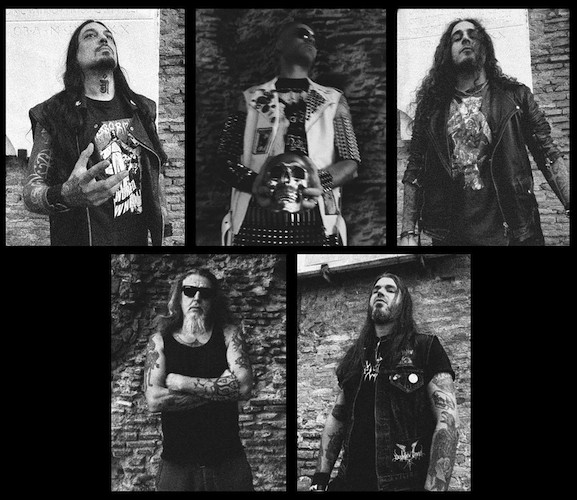 It is a most terrifying experience, and yet, in a height of paradoxy, I feel like kneeling before it. It seems willfully designed to repel and destroy, to ravage and rend, rather than to attract, yet I think I have become the victim of Stockholm Syndrome — a hostage to heartless captors, yet captivated.

The music seems to find a meeting place between gothic horror and mythic ritual. It takes as its subject matter “the ancient rites of a civilization whose denizens sought the favor of gods who wreaked havoc by meddling in earthly affairs” (to quote the label’s publicist). It draws its life from the Etruscan forefathers who inhabited the band’s environs in Italy millennia ago, and sends death to all.

It’s a guitar album, but not the kind that usually gets that appellation. In this case, the roar and squall of the guitars, augmented by dual leads, dominate the sound, and also provide many of the rhythms. With their deep, toxic, reverberating tone, the riffs (and the bass) sound like noise being emitted from a thick iron pipe clogged with filth. The leads sear the brain, and generate a pestilential, otherworldly, and magisterial atmosphere.

This isn’t to detract from the power of the pummeling drums or the hammering, thrumming bass. Their presence is explosive, their changing dynamics electrifying. The vocals are equally effective in penetrating the storm of the guitar, and they are a storming cacophony of horror, a tuning of a human instrument to resemble things utterly inhuman — so dreadful, demented, and ghastly that the idea of demonic possession suddenly seems credible.

Sangue enlisted Claudio Simonetti, the famed member of Goblin and an aficionado of horror movie scores, to compose and perform the intro track, “In the Church“, which sets the stage through heaving organ chords and spectral shimmering tones. There are two other interludes (“Call of the Gorgon” and “Tuchulcha“), which are themselves cold and frightening in their accretion of strange emanations — but less frightening than the six tracks that make up the rotting meat of the album.

Here are a few notes about those six; you don’t have to read them, but I have to write them or I’ll have even more trouble sleeping tonight:

“They Do Not Rest (Clock of the Giants)“: Chaos reigns; savage, slashing riffs drenched in distortion, and scorching, acid-spewing vocals, with wild wails and cauterizing shrieks; a slithering, slimy lead that moves like a snake; when the storm abates, a wretched melody takes over, moaning and mewling like an abomination of flesh crawling toward a maggot-filled nest, yet with a kind of horrible immensity to the portrayal.

“Eerie Murmuring _ Infinity Abysmal“: A raw, writhing riff, poisonous and unchained, with a compulsive rhythm and a nightmarish atmosphere; the fretwork darts like a feral, rabid beast backed by scorching shrieks; the boiling guitar rises like an imperious demand that will not yield, and falls like a mantle of plague.

“Shifting into Necrocosmos“: The riffs continue to carry rhythms, but here it’s particularly frenzied and insane — and then the sound seems to groan and gag, and to swarm like souls in a cauldron of hell. The leads spiral up like a bonfire, but not one made of wood and oxygen, fueled instead by agony. It gets the slow headbang going, but is one of the most terrifying tracks on the album.

“Her Cold Breath“: A miasma of abrasion; massive, slashing, stomping, and raking chords, as doomed in their resonance as the repeating strike of an executioner’s axe; the leads as miserable as the mind-splintering weeping and shrieking of the truly hopeless, mere steps away from their extinction.

“The Rite of Cosmic Void“: This is a track from the band’s 2017 self-titled EP, re-recorded for this album, and sharpened into a cyclonic vortex of carnivorous feeding sounds, yet also steeped in desolation; a breeding ground of spine-shivering yells, throat-shearing shrieks, and mutilated leads.

“When the Magus Whispers to the Skies“: Jet-fast riffing, like the squall of gale-force blasts channeled through a cavernous sepulcher, and the dervish-like spinning of knives. The sounds of misery choke the brain; the ravaging ferocity of the scything fretwork conjures images of mass slaughter; the vocals channel fury and fever, reverence and dementia; everything ends with the weird shimmer of organ chords and tinkling chimes, and gasping. Or was that me gasping?

Further credits: Culś was mixed and mastered by a member of Demonomancy at The Devil’s Mark Studio. One of our favorite artists, Timo Ketola, created the cover art. Poster art was provided by Enzo Sciotti, famous for the horror art he has created since the 1980s for films such as The Evil Dead and Army of Darkness.

Culś will be released on April 15th by Nuclear War Now! To learn more about the release as info becomes available, watch these spaces:

One Response to “AN NCS ALBUM PREMIERE (AND A REVIEW): SANGUE — “CULŚ””