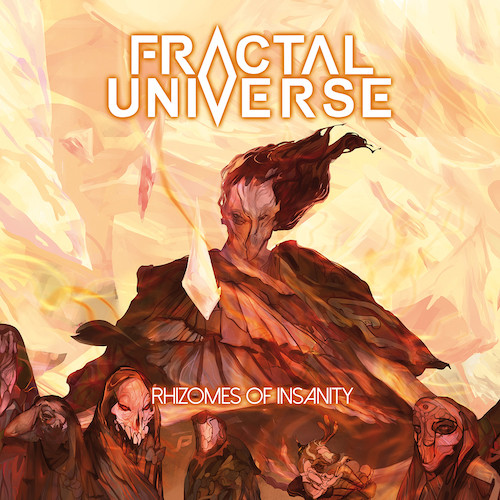 (This is TheMadIsraeli’s review of the new album by the French progressive death metal quartet Fractal Universe, scheduled for release by Metal Blade on April 19th.)

I am a HUGE fan of Fractal Universe and what they do.  I find myself, as a result, actually pretty perplexed (from within my small window view) at the extremely mixed opinions on this band across the scene.

It’s progressive death metal with the sort of oddball cross-genre hybridization that I feel we need more of.  The biggest complaint I’ve always heard about this band is that these guys don’t quite have an identity, or that they sound confused in terms of what they want to be. I strongly disagree with this assessment, and honestly wonder if people just don’t “get” it.  I don’t mean that in a pretentious way. I simply mean that I think people don’t get where this band is coming from, or make comparisons that are, in my mind, plainly wrong. 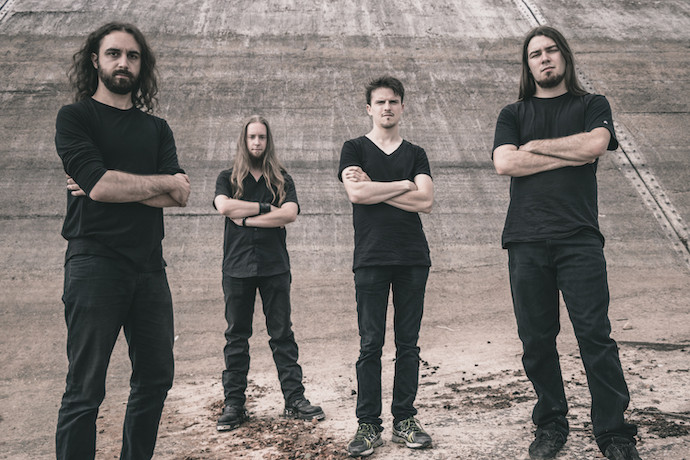 The thing about Fractal Universe is that their music is  progressive death metal that’s formed from influences that aren’t death metal at all, and I think that’s really cool.  Their mix of Darkane’s progressive technical thrash metal and Textures‘ syncopated groove and atmosphere, combined with a very Dan Swanö-esque sense of overall proggy ambitions makes for a band who, in my mind, don’t sound like anybody else. It’s thrash and progressive groove metal played through a death metal filter.

So, that leaves us at Fractal Universe’s new record Rhizomes Of Insanity, and where it takes off from the band’s previous fantastic debut full-length, Engram Of Decline.  Much in the same way Darkane have described their own evolution, Fractal Universe is definitely a band that moves sideways instead of forward.  I admit that I kind of don’t know exactly what that even means, but I definitely “feel” that.

I guess if I were to take a stab at it, because I do feel it’s accurate, moving sideways in musical evolution describes a band who continuously adjust the levels of prevalence among the stylistic elements in their sound.  You aren’t changing what you do, merely changing the layout of it.  Rhizomes Of Insanity definitely embraces the band’s neo-thrash disguised as death metal tendencies much more so than Engram Of Decline, which leaned more on technical death metal combined with a lot of Textures-style grooves.

As such, the riffing is more technical, the vocals are not scaled back in intensity, but re-purposed.  The Darkane comparisons on this album are pretty unavoidable once any of the choruses with harsh melodic vocals start up.  The emphasis of this album overall to me is very oriented to lyrical riffing, combined with progressive stylings reminiscent of Swanö and Opeth, with a thrash undercurrent.  (Opener “Oneiric Realisations” has a post-chorus riff that perfectly defines what this album is about.)  The guitar work on this record, ranging across all the pedal-point riffs, use of jazzy chord work, and acoustic passages, really defines Fractal Universe as a whole.

The thing about this album that’s even more impressive, though, is how weighty, oppressive, and intense it manages to be without requiring non-stop blast beats or other typical prog/tech death fare.  The emphasis on grooves powered by intensely ornamental drumwork gives the music a very collected and masterfully reigned-in vibe, which I love about this band.  Although there are definitely blazingly fast masterworks on here, such as “Masterpiece’s Parallelism”, the titanic grooves of songs such as “Rising Oblivion”, “A Reality To Foreclose”, or the delightful swing of “Fundamental Dividing Principle” are where the band’s best song-writing takes place.

Fractal Universe are a band essential to any extreme metal fan who loves the progressive and the weird, with Rhizomes Of Insanity being another fine addition to their brand of enigmatic sonic mastery.  Fantastic record.

One Response to “FRACTAL UNIVERSE: “RHIZOMES OF INSANITY””