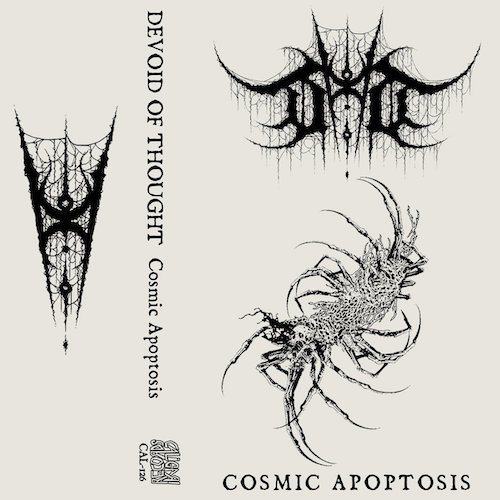 In October 2017 we premiered a demo named Astral Necrosis by the Italian band Devoid of Thought, whose name I thought would also describe the mental state of listeners exposed to the demo’s three tracks. The music was a whipsawing amalgam of death metal and thrash, with the kind of blazing instrumental performances and brain-spinning intricacy that might lead one to slap a “progressive” label on the ingredients as well — except the music seemed too maniacal and vicious for that word. It was insanely good, and also just insane.

Now Devoid of Thought are returning with a new EP, which proves to be just as severely destabilizing and perhaps even more ghoulishly fascinating than Astral Necrosis. Entitled Cosmic Apoptosis, it will be released on April 19th — tomorrow! — by Caligari Records, but we’ve got a full stream for you today. For those who’ve encountered  the earlier demo, you’ll have a decent idea of what’s coming. The following paragraphs are for everyone else — because it would just be cruel to expose newcomers to these three tracks without some kind of warning. 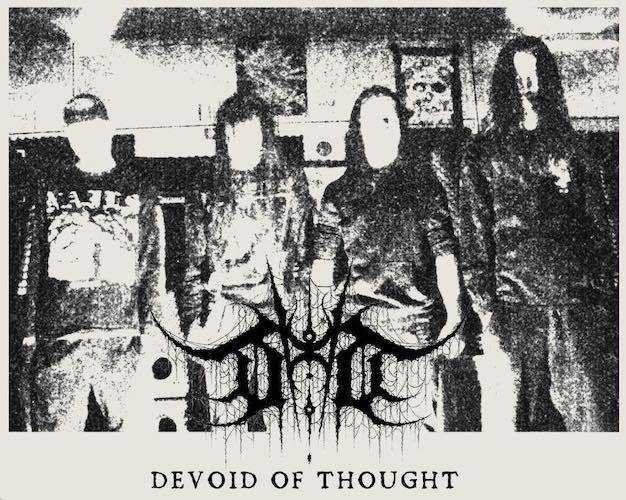 I want to be very clear up-front: We are in the presence of deviant madmen, who are possessed of a certain macabre genius, and are probably also just possessed (by demons). Their compositional proclivities are crazed, but the technical proficiency of their execution is damned impressive. And fortunately, there’s just enough clarity in the mix to allow an appreciation of that acumen (the bass, for example, is quite noticeable). But clarity is a relative term, because the guitars are tuned to a level of toxicity that’s dangerous to anyone’s mental health, and the vocals — an array of gruesome roars, scalding howls, crazed yells, and noxious gagging sounds — are downright grotesque.

These three songs are dizzying and disorienting, monstrous and macabre, calamitous and queasy — an ever-changing blend of foul oppressiveness, frenetic, fireball lunacy, and blood-freezing violence — and there’s absolutely no way to predict what will happen from minute to minute. Every instrumentalist seems to have a mind of his own, and simultaneously to have lost his mind. They move apart like a school of fish with a predator in their midst, darting and diving, slowing and scurrying, changing tempos and riffs on a dime, all angularity and dissonance, and coalescing just often enough to keep you from flailing in a seizure.

You get a vivid display of all these qualities in the opener, “Necronaut”, which begins with the miasma-like sound of disease, the riffs reverberating in a sickening vibration, laced by weird swirling and shrieking leads. But, as forecast above, the song changes continuously — erupting in an effusion of clattering drums and slashing, swarming riffs, pierced by a discordant solo, devolving into a trough of disgusting decay, and spinning into cyclones of maniacal violence.

Similar kaleidoscopic changes occur in the other two tracks, though the band do inject “Tomb Marauders Horde” with bursts of jackhammering, head-hooking riffage, even though the array of boiling, skittering, and angular leads portray delirium. The third track, “Stargrave”, is the longest, and thus gives Devoid of Thought more room to maneuver, and they interweave a thoroughly electrifying gallop, all cylinders firing, all guns blazing — and then the guitars squirm and wriggle like joyous maggots feeding on a rotting corpse.

I’m tempted to slap the label “experimental” on all this disturbing noise, but there’s enough old school death metal evil and brutality in these songs that it doesn’t feel quite right to do that. Nevertheless, it’s definitely an off-kilter and highly chaotic form of the genre, and an EP that left this reviewer wide-eyed and slack-jawed in wonder — and feeling like something weird had happened to his inner ear (make sure you’re sitting down when you listen so you don’t lose your balance and fall over).

Caligari Records will (of course) release Cosmic Apoptosis on cassette tape. Look for it in all its mind-bending glory tomorrow (though you can pre-order now).