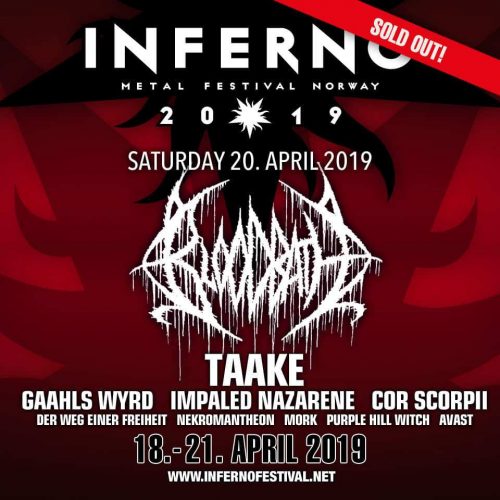 What can I say about the third day of this year’s Inferno Festival?

Quite a lot, as it turns out, although, for various reasons, still not as much as I’d hoped.

For you see as soon as I woke up I knew something wasn’t quite right. I just felt a little… discombobulated… and unable to get myself in gear.

Thankfully this didn’t stop me getting to the festival in time to catch the day’s opening set from Der Weg Einer Freiheit.

Now there are those who might have you believe that the German quartet are basically just 99% blastbeats… when the truth is it’s more about 87%… but even when performing at a near-relentless hyperspeed pace DWEF manage to pack in a striking amount of dynamic and atmospheric shifts into their music, and their live show really reflects this, providing an early and much-needed cathartic release for both performers and punters alike.

By way of contrast, the doomier Black Metal misery of Acârash opts for a much slower, groovier approach that’s almost (but not quite) the exact opposite of the previous band’s rapid-fire riffosity, with a much bigger emphasis on ritualistic rhythms and sinister, slithering song-structures.

True, over the full-length of their set things did start to get a little samey (although the incorporation of some explosive blast passages into the one new song they debuted this evening promised a much more varied second album), but these guys definitely made an impression and will be a band I’m definitely going to be keeping an eye on going forward.

Continuing the evening’s much more blackened feel (I’d argue that this was definitely the most overtly Black Metal day of the entire festival) Finnish firebrands Impaled Nazarene put on a predictably solid, but not particularly stunning, performance back up on the main stage which successfully kept everything simmering over nicely without offering much in the way of shocks or surprises.

Speaking of surprises, however, Blackened Post/Post-Black metallers Avast (whose album I totally spaced on last year, to my regret) turned out to be a big one, putting on a show that was far more impressive and far more intense than I’d expected, with some absolutely brilliant highs and bleak, brooding lows mixed in along the way. And hopefully everyone else who made it down to John Dee to see them felt the same way, as they really deserve far more attention in my opinion!

It was around this time I start to feel bad… really bad. My bones were beginning to ache, my joints felt covered in sandpaper, and my throat was starting to feel extremely rough. This was not a good sign.

Thankfully, the uniquely mesmerising performance of Gaahl’s Wyrd (plus a few fortifying beverages) helped distract me from my growing pain and discomfort, as the band’s mix of haunting, hypnotic lead melodies and ominous, oppressive riffs – all topped-off with Gaahl’s ever-creative and always-charismatic vocals – made it very easy to lose myself in the music.

And while it was nice to hear a few classic Gorgoroth cuts thrown in here and there too, it really was the band’s own material that caught my ear the most, and has me eagerly awaiting the release of their full-length debut.

Keeping the black flag flying, it was Mork’s turn next to unleash the beast, filling John Dee with ravaging riffs and scything tremolo melodies in celebration of the release of their new album Det svarte juv (which I’ll hopefully be able to review here at NCS very soon).

And while I can’t necessarily say they did anything to reinvent the wheel over the course of their performance, that clearly wasn’t the point, and what they did offer was a throwback to an era of Black Metal as yet unsullied (or uninfluenced) by outside concerns, and was all the better for it.

Now, at this point, things were really starting to take a turn for the worse for me personally. I was burning up, my kidneys were throbbing with pain, I was starting to sweat (and simultaneously shiver) profusely, and my legs were honestly more than a little shaky.

Still, I knew I had to stay for Taake at least, since there are very few bands these days (with Kampfar being perhaps the prime exception) who are able to represent “true” Norwegian Black Metal while also pushing the style forwards in their own particular way.

Thankfully I wasn’t disappointed at all by the band’s set (even their surprise cover of “Cold” by The Cure, with guest vocals from arch-provocateur Vrangsinn), which touched on almost every era of Hoest’s 20 year career, from the early days of Nattestid ser porten vid all the way up to 2017’s Kong Vinter.

It was a great reminder of just how many ridiculously good riffs and massive hooks that the Taake discography contains, and that, above and beyond all the edge-lord controversy and troublemaking, the band’s music still retains a pure and primal power to engage and entertain on multiple levels.

Unfortunately by the end of Taake’s set I was barely able to stay on my feet, and so, deciding that discretion was the better part of valour (and honestly feeling like I would probably die if I stuck around any longer), I staggered back to my hotel room, leaving only my apologies and regrets for Cor Scorpii and Bloodbath. 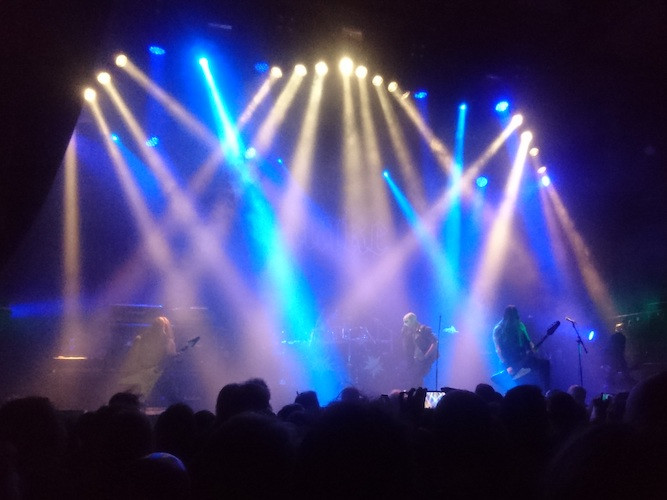