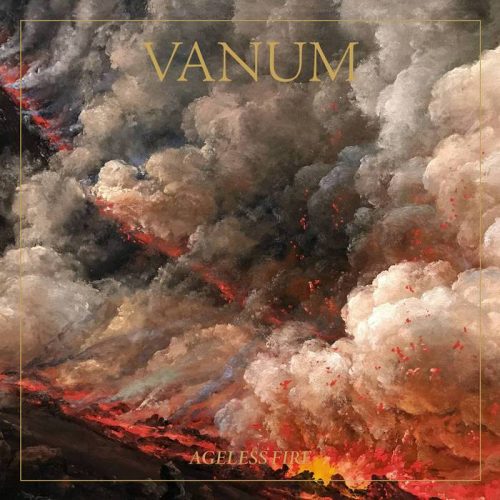 Anyway, this has very little to do with the bands I’m writing about here today, other than to act as a cheeky little segue into me saying that today’s article is brought to you by the letter V and the number 4. 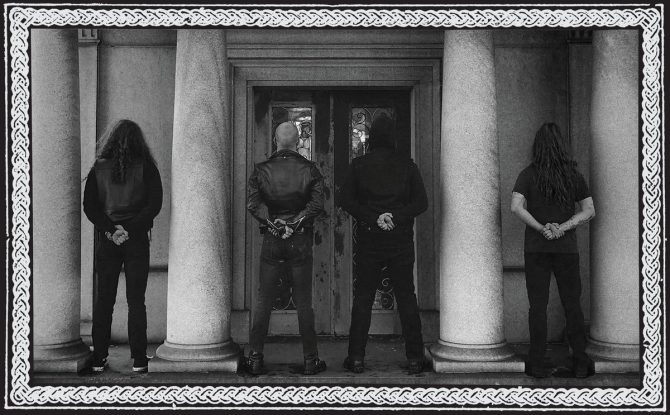 With a sound as full of elemental energy and primal beauty as the eye-catching art which adorns its cover, Vanum’s Ageless Fire builds upon the already impressive work of 2015’s Realm of Sacrifice and 2017’s Burning Arrow with six scintillating tracks (four main songs, bookended by two atmosphere-enhancing instrumental numbers) which epitomise the brilliance of American Black Metal in all its glory.

Throughout the album the guitars flow and cascade in a ceaseless, seething torrent of molten metal while the drums beat out a series of primordial percussive patterns that you can feel right in the marrow of your bones.

The vocals, which frequently take a step-back to allow the music to hold centre-stage, are delivered in a hoarse, heartfelt howl which recalls the genre’s earliest progenitors, whereas the use of sombre, simmering melody errs towards a much more modern and atmospheric approach to Black Metal.

And it’s in the centre of this nexus, juxtaposing both the most primitive (some might say fundamental) and straightforward aspects of the style against a sense of more progressive and enigmatic ambition, where Ageless Fire reaches its true potential, striking the ear again and again with an immediacy which belies the much deeper and more immersive nature of every single track.

It’s a fantastic album, utterly epic and electrifying through and through, and one which works on multiple levels without sacrificing an ounce of intensity or immersive atmosphere in the process. 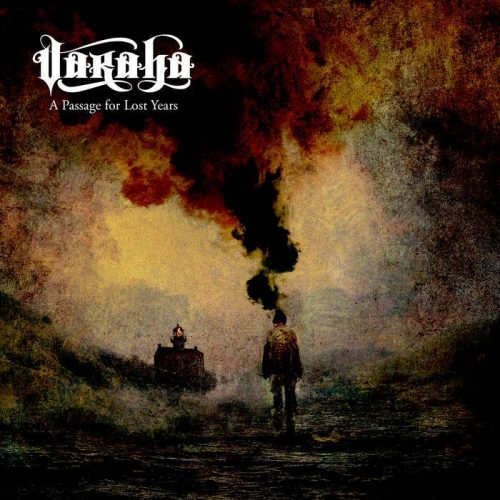 VARAHA – A PASSAGE FOR LOST YEARS

We’ve known for a while now, ever since their first EP, that Chicago quartet Varaha were a good band, but the release of their highly-anticipated full-length debut suggests that they might just have potential to be a truly great one someday… even if they’re not quite there just yet.

At its strongest, such as during the cinematic “Climax & Exile”, the Anathema-esque “My World and Yours”, or the dreamlike “Refrained”, the band’s music is both utterly spellbinding and heart-breaking in equal measure, melding gothic gloom and weighty Doom with an unexpectedly raw and vulnerable edge which frequently leans towards the more emotive and expressive end of Black Metal popularised by Alcest, Agalloch, and their ilk.

And while the band aren’t ashamed to wear their influences out on their sleeve – in addition to those names mentioned above the attentive ear will also be able to pick out echoes of Katatonia, Novembre, and Paradise Lost– they’re also careful to, for the most part anyway, weave these influences together into something beyond the mere sum of its parts.

It’s not perfect by any means, of course (despite what you might have read elsewhere). The decision to kick things off, effectively in media res, with the rather abrupt beginning to “Severance” doesn’t make for the strongest start, for example, nor am I convinced that the orchestrally-embellished instrumental interludes add much to (and, in fact, might actually detract from) the overall flow and dynamic of the album.

Still, by closing with the titanic pairing of “A Passage for Lost Years” and “Irreparable”, the former of which is practically worth purchasing the record for on its own, Varaha ensure that their debut album leaves an incredibly strong (and hopefully long-lasting) impression on the listener which bodes extremely well for the band’s future.

VIELIKAN – BACK TO THE BLACK MARSH

Make no mistake about it, Back to the Black Marsh is one of the most intriguing records which I’ve heard all year, and looks very likely (already) to have earned itself a place on my EOTY list.

With a sound built around hefty blocks of ominous, oppressive riffage and punchy, progressive hooks – think Edge of Sanity or Opeth with added crunch, or perhaps someone like In Mourning with an extra dose of both atmosphere and aggression – it’s an album full of clever twists and unexpected turns, yet never lacks for heaviness or intensity.

Opener “Ethereal Travel”, for example, is ten minutes of dense, churning riffage (akin to both Morbid Angel and Gojira) and eerie, nerve-jangling melody topped off with an impressively varied and visceral vocal performance – sometimes grittily melodic, sometimes grimly guttural – which immediately helps set a very distinct, tone for the record.

“Seeded Alterations of Consciousness”, by contrast, is a much shorter display of blasting metallic momentum and spine-tingling, pseudo-melodic melancholy, while “Mysticism, Thaumaturgy, and Ephemeris” pushes things in an even darker, proggier (not to mention heavier) direction over the course of nine-and-a-half morbidly-infectious minutes.

And while both the cunningly complex “God(s), Love, and Life” and the unexpectedly hooky “Another Speech for Those Whose Faces Are Erased” are both as captivating and cathartic (not to mention crushingly heavy) as anything else I’ve heard this year, the album’s piece de resistance has to be the penultimate Prog-Death monolith of  “The Final Confrontation with the Soul Harvester in the Heart of the Black Marsh”, which takes you on an intense (not to mention audacious) inward journey over the course of thirty-three(!) mind-bending, soul-stirring minutes before the climactic strains of “I Am The Black Ocean” bring the whole record to a close in one final paroxysm of pneumatic riffs, pounding percussion, and poignantly moody, pseudo-melodic vocals.

I’m not claiming that Back to the Black Marsh is a perfect album by any means (the drum programming takes a little getting used to in places, though for the most part plays its role very well), but it’s definitely an album that stands out from the crowd – for multiple reasons – and which I can confidently predict I’ll be listening to for a long time to come. 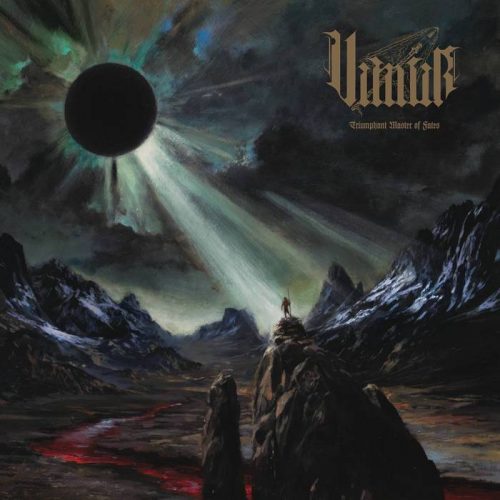 If there’s one thing that Vimur want you to know on Triumphant Master of Fates, their second full-length album, it’s that they like riffs. And lots of them.

And we’re not just talking rote tremolo runs or second-hand Satyricon grooves. No, we’re talking bold, bombastic, Immortal-meets-Naglfar (with perhaps a dash of At the Gates and/or Dismember, amongst others) riffs, riffs that bestride mountains and echo through the hallowed halls like raging metallic thunder.

Opener “Seditious Apertures”, for example, rides the lightning and reaps the whirlwind in scintillating style, propelled by some seriously explosive drum work and some razor-sharp melodic hooks, while “Consumed by the Source” initially favours a moodier and more patient approach that slowly develops into something much more epic and grandiose as the song progresses (with a couple of extra points added for some nice, subtle bass work along the way).

“Adversarial Impetus Ignition”, however, is something extra special, which takes the most melodic elements of the band’s various influences and welds them onto an even cleverer and more creative structure whose blend of pristine, proggy twists and cutting, endlessly catchy riffs always seems just that one step ahead of the listener’s expectations.

And while the pairing of synth and sample-heavy interlude “Sulphurous Hallucinations Manifest” and the relatively stripped-down straightforward “Nuclear Desecration” signals something of a lull in the album’s forward momentum, by the time that fearsome final track “Supreme Preemption of the Lightless Empire” makes its presence known in a ten-minute torrent of righteous riffs and moody melody (following the unexpectedly doomy deviation from the norm that is “Our Dearest Hopes Lie Buried Here”) the whole record is right back on track and racing, all guns blazing, towards the finish line.

Of course there’s something to be said for the observation that Triumphant Master of Fates isn’t exactly reinventing the wheel (or re-burning the church), and I’d probably agree with you if you said that Vimur are still dwelling a little too much in the shadow of their biggest influences and inspirations, but you could do far, far worse than grabbing this one and sticking it on at maximum volume next time you’re looking for something to make you feel like taking on the entire world single-handed.