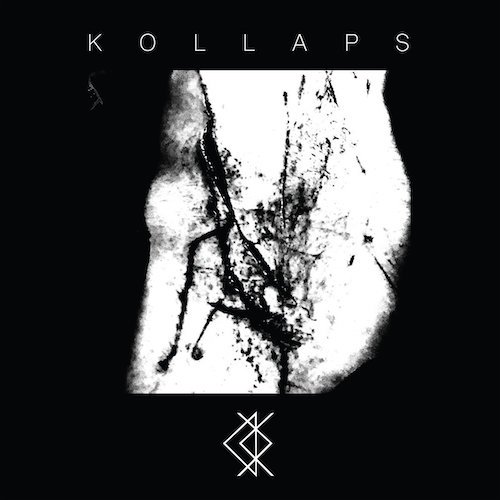 (This is Todd Manning‘s review of the new album by the Australian band Kollaps, which was released on May 3rd by Cold Spring Records.)

Kollaps are an Australian Post-Industrial trio deep-diving into the depths of sonic extremity on their second album Mechanical Christ, out now on Cold Spring Records. Not unlike their peers in this rather small niche in Extreme music, Kollaps take the listener on a harrowing journey through utter darkness and despondency, a place where guitar riffs are thrown out and replaced by sledgehammer percussion and waves of abrasive distortion.

The term Post-Industrial, used to describe Kollaps, is an interesting choice. Their sound in many ways is a return to the roots of Industrial Music. It is not hard to hear Throbbing Gristle, Test Dept., and Einstürzende Neubauten in the Sturm und Drang on Mechanical Christ, yet also present are more modern elements taken from Noise and Drone, and the effect is remarkably unsettling. 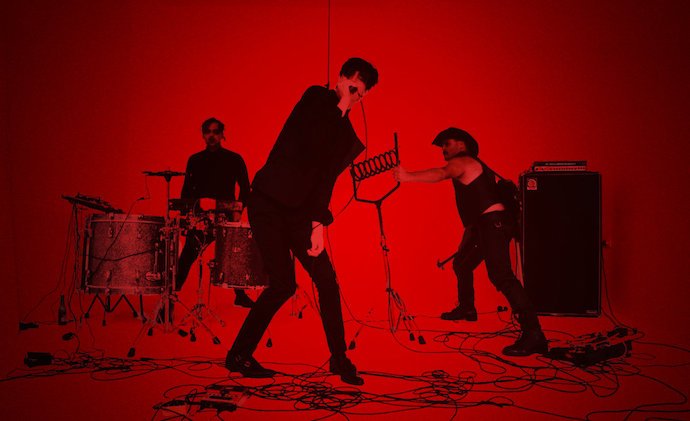 The album opens with a wash of noise, and a sample of someone expressing extreme emotional distress. There is nothing overly transgressive about the sample, but the emotional distress is chilling. Emerging from this is the album’s first proper track, “Crucify”. Driven primarily by savage plodding percussion, an unhinged vocal oscillates between primal scream therapy and barbourous incantations. At one point the beat becomes muffled, pushed beneath ominous waters, only to reemerge just as frightening as before. The experience is immersive, if deceivingly straight-forward.

The following song, “Fleshflower”, follows a similar trajectory, but is shorter and hints at some sort of thoroughly deconstructed Punk. The percussion batters away relentlessly while the noise is paint-peeling. Meanwhile, “Blood Premonitions” and “Traducer” pull the tempos and dynamics back a bit, although the latter still ends up being an extremely noise-ridden affair. Both pieces possess brutality and brooding menace in equal measure, exerting an almost hypnotic pull into the eye of violence.

This more measured approach reaches its apex with the album’s title track. The percussion crawls along at a Funeral Doom pace, while the manipulated voice intones its savage prayers. Kollaps revel in their own patience here, drawing the listener along in a slow and painful procession, and at the end, the release of all the built-up tension provides release but no relief.

The album closes with its most distinctive track, “Love is a War”. Here, the noise is pushed into the background, supporting a plaintive, almost gothic vocal and a strummed acoustic guitar. Here, Kollaps walks a fine line between the Neo-Folk of Death in June and the apocalyptic solo albums of Steve von Till and Scott Kelly. Both the vocals and percussion increase in urgency as the song unfolds. Strangely, one layer of the song sounds like a ballad for the end of the world, while the other sounds like the climax to an Industrial Doom dirge. The two parts work perfectly in conjunction with each other though, and the listener is drawn along blissfully into the end times.

Kollaps love to revel in their primativism, extracting the maximum impact from relatively simple material. Yet there is a subtlety to their performance that draws out layer upon layer of nuance. If aural torture is the first impression upon hearing Mechanical Christ, repeated listens will reveal further levels of despondency and depravity. The only question is why we keep coming back for more.