While musical adaptations of Fröding’s verse have been wide-ranging, the range is even wider now because the Swedish death metal band Mordbrand have made two of Fröding’s poems the lyrical subject of songs that will be released digitally and in a 7″ vinyl format on May 15th, via De:Nihil Records — and today it’s our pleasure to present streams of both tracks: “Döden” and “Efter Döden“. 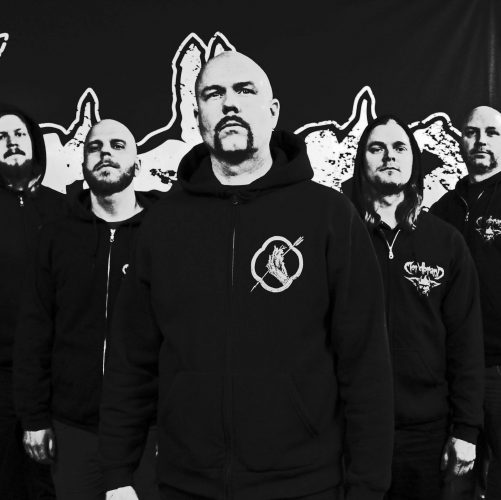 We have written frequently (and very appreciatively) about the music of Mordbrand over the years, but Döden / Efter Doden is the band’s first recording as a five-piece group, with Kristian Karlsson (bass) and Christian Fredriksson (guitars) now joining the original Mordbrand trio of Björn Larsson (guitars), Johan Rudberg (drums), and Per Boder (vocals).

We, unfortunately, are not masters of the Swedish language, but if on-line translation tools are to be trusted, Fröding‘s poem “Döden” is about the experience of death, about the effects of death’s hand laid upon a feverish brow, only to be removed. The music Mordbrand have created for those words is immediately powerful and disturbing, a combination of explosive drum and bass rhythm and a disturbing guitar harmony that translates the fever of illness into sound. Those feelings of delirium and fear persist even when the rhythm section escalate into a pummeling drive and an extravagant, growling roar begins giving voice to the words.

The emotional intensity of the song builds like a bonfire in a strong wind, a wind that carries the scent of death and misery. Yet there is powerful vitality in the song as well, and the flame burns hottest through a remarkable solo, and in the sound of majestic chords and livid howls (Jeremy Peto of Morgion makes a guest appearance in the song). The bass and drums remain massive presences throughout, pushing and pulling the song’s energy with a sonic strength you can feel in your bones. The music is also enthralling throughout, and by the end seems to be more a banner of defiance and resilience than a surrender to endless gloom.

Still hobbled by ignorance of the Swedish language, we are again left to the mercy of on-line translation tools for an understanding of the poem “Efter Döden“, but even those undoubtedly garbled results are eloquent and inspiring, as Fröding seems to be imagining the many possibilities of what might come after death. As compared to “Döden“, Mordbrand‘s music here is immediately boisterous and hard-rocking, with a skirling riff that’s also immediately addictive. The rhythm section delivers just as much megawatt power as in the first song, and will get your pulse jumping hard and fast.

The dynamism present in “Döden” is also on display in “Efter Döden“, as the band transition the song into a glorious anthem and then a punk-rocking gallop. Following a bright, rippling guitar bridge the band create a headbanger’s heaven, so get your neck loose before you get into this track. The music cycles seamlessly through changing cadences and musical styles, and even though the song is full of buoyant life, Mordbrand don’t let us forget that the song is still about death, and there is something about the simmering riff that draws the track to a close that’s disturbing, fearful, and hauntingly otherworldly.

This really is a fantastic two-track release, with both songs so engrossing that it’s very easy to come back to them again and again. Döden / Efter Döden was mixed and mastered by Lawrence Mackrory, and the layout of the record was designed by Łukasz Jaszak. Pre-orders of the vinyl edition are available via the link below.