In 2017 we devoted significant attention to Futility Report, the debut album of the Ukrainian iconoclasts White Ward, hosting the premieres of two songs and then of the album as a whole. It was (and still is) brilliant in a way that few albums are in any year. In its extravagant inventiveness and unexpected stylistic juxtapositions it could have been a train wreck, mangled bodies strewn about like broken toys, and fractured machines burning in a jumble of warped iron and splattered diesel. Instead, like mad scientists who are in fact visionaries, White Ward produced something through their unorthodox splicing of diverse musical genres (which included black metal and jazz) that was as enthralling as it was deviant.

In the abstract, contemplating how White Ward might have improved upon Futility Report in a second album is an odd exercise, because it assumes the possibility of gauging greater or lesser degrees of success when there is no objective measuring stick at hand for their kind of bohemian rhapsodies. At a minimum, however, it’s possible to say that the band’s second album, Love Exchange Failure (due for release on September 20 by Debemur Morti Productions), is still non-conformist, still surprising, still electrifying. And while it’s obvious that White Ward still have no inclination to follow any straight and narrow path, their new compositions seem more cohesive, and more powerful in their capacity to evoke strong emotional responses, without at all repressing the adventurous spirit that drove the first album from beginning to end. 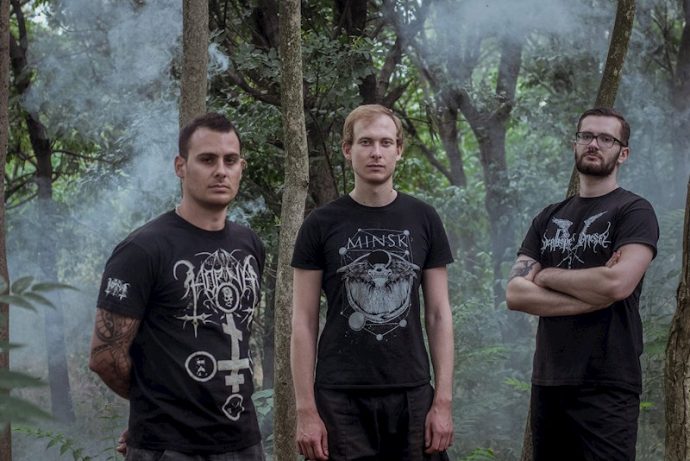 Perhaps even more so than on the first album, venturing into the new one is like wandering unfamiliar, fog-shrouded urban streets at night, bombarded by raucous sounds and bright lights distorted by the mist, feeling both exhilarated and fearful, ducking into dingy alleyways to escape hulking shadows pregnant with violence, or to search for something more than the cold indifference of glazed eyes in emaciated figures that appear like wraiths as they pass under the street lights and then vanish again, and encountering the fleeting sounds of jazz from open doorways as you hurry along, wondering what the next bend in your crooked path will reveal.

One month ago Decibel premiered the new album’s title track, which we discussed at length here. Now it’s our turn to reveal a track from the new album, this one named “Dead Heart Confession“.

Like the title track, this one is a dynamic affair, with a changing course that’s at times bewildering, and even hallucinatory, but tied together with powerful pulses of rhythm and melody that give the music an enlivening vitality in the midst of destabilizing disturbances.

Contrasts occur throughout this ten-minute piece. The opening reverberation of slow strummed chords and febrile keyboard emanations are blasted away by battering drums, a cascade of crashing abrasive chords, and harsh snarling vocals. As the momentum slows, the flickering melody sears and soars, as do the voices, rising in grandeur at the same time as the weight of the music becomes more crushing, but the song surges again in a volcanic tumult of heavy pulsing bass notes and high flickering keyboard tones.

Abruptly, there is a digression — a duet of soulful bass and smoky saxophone against a backdrop of shivering, mellotron-like keyboard vibrations — and just as abruptly, the band slash and smash that beguiling interlude away in another storm of rampant percussion, savage vocals, and dense gales of guitar, with another big vibrant bass pulse in the middle of everything. The music both ascends and seems to be pulverising bedrock at the same time, with wrenching howls and impassioned singing magnifying the music’s thrilling yet wrenching assault on the senses. The saxophone returns at the end, more frenzied and forlorn than before, as the ravaging intensity of the music crests one last time.

To help you understand what the new album’s title refers to, we’ll share White Ward‘s explanation:

The album is available for pre-order now. It’s well-worth your money.