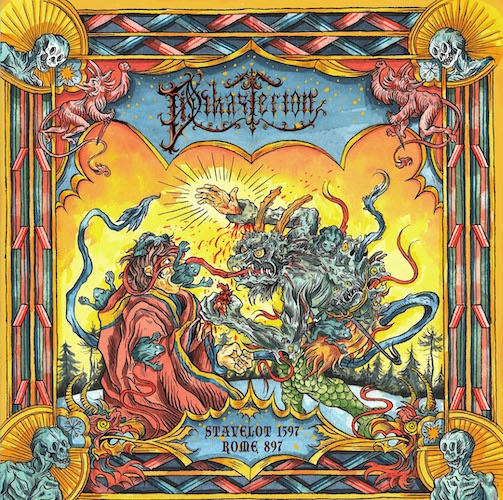 Building on the strength of their slaughtering 2018 debut demo, the Belgian black/death band Dikasterion have escaped Hell again, and brought much of Hell with them in a new two-track release coming our way via Amor Fati Productions on September 9th — next Monday. If you think those references to hellish power were exaggerations, just listen to Stavelot 1597 / Rome 897 (which we’re giving you the chance to do a bit further on in this post).

Only two songs long, this is the kind of pull-no-punches barbarity capable of leaving a listener mind-mangled but crackling with electricity and wishing it were longer. Make no mistake, it’s a cruel and ugly assault on the senses, not any kind of experience for the faint of heart. But as toxic, brutish, and maniacal as the music may be, these sulfurous, diabolical assaults get the pulse pounding with primal power. 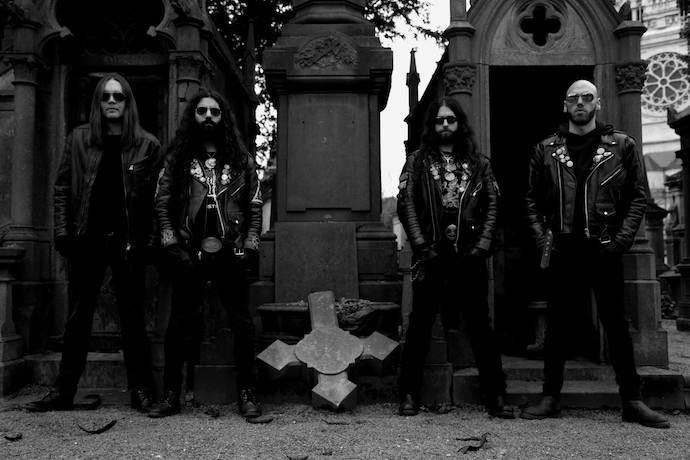 Lacking any information about what the songs might be addressing, lyrically, I did some research. In the case of “Stavelot 1597“, I discovered that in that year there occurred a trial in the Benedictine abbey of Stavelot, in which a monk was accused of conspiring with satanic forces in the practice of black magic, which had caused the illness and death of other monks. After the trial, the condemned man was beheaded forthwith.

As for the other song on this release, “Rome 897“, I learned about the macabre “Cadaver Synod” which took place in that city in that year. It involved an ecclesiastical trial of Pope Formosus, held in the Basilica of St. John Lateran in Rome, a trial that occurred after Formosus had died. According to this source, Pope Stephen VI ordered that the corpse of his predecessor be removed from its tomb and brought to the papal court for judgment, where the corpse was interrogated while propped upon a throne. Eventually, the corpse was found guilty. “[A]fter having the corpse stripped of its papal vestments, Stephen then cut off the three fingers of the right hand that it had used in life for blessings… The body was finally interred in a graveyard for foreigners, only to be dug up once again, tied to weights, and cast into the Tiber River”.

As for the music accompanying these tales, a terrifically nasty and distorted riff begins “Stavelot 1597“, seething with a mixture of gnashing fury and cold cruelty, joined by caustic goblin shrieks that are not one whit less furious. The drums batter and pound, the riffing morphs into toxic, brazen blasts of sound and then becomes a burning flame of ecstatic delirium. As the music segues back into those tyrannical blasts, a fretburning solo sends chills up and down the spine, leading into a paroxysm of roiling, raking guitars and unhinged vocal excess, and then a juggernaut of clobbering percussion and heaving, violent chords.

A livid, boiling riff sets “Rome 897” off on a blazing course immediately, but as in the first song, Dikasterion are in constant flux, the drummer veering sharply from thunderous fusillades to skull-slamming marches (and a lot more), the miasmic guitar sounds shifting from bloody rampant mayhem to the poisonous tones of abysmal degradation, the vocalist venting enraged tirades but also unhinged screams.

Amor Fati will release this shuddering duo of songs on 7″ vinyl. It will become available for order by Monday at these locations: