(Here’s Andy Synn‘s review of the new album by the Norwegian destroyers Blood Red Throne, which is being released today by Mighty Music.)

Now, I’m aware that I’ve caused a fair bit of controversy and upset over the last few weeks.

And I apologise for nothing.

But perhaps now it’s time for us (well, most of us, some people just won’t let things go) to put aside our differences and begin the healing process.

And what’s more healing than a good dose of Death Metal? 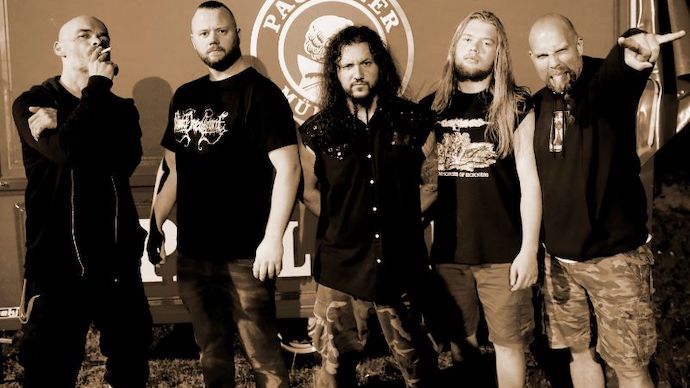 Blood Red Throne’s ninth album, Fit to Kill, is significantly more Old School (something which the band themselves willingly acknowledge) than anything we’ve heard from them in quite some time, and reminds me a lot of the band’s early 2000s, Affiliated…/Altered Genesis era.

That doesn’t mean that Død and co. have decided to just completely rehash the past however, nor have they forgotten the various lessons they’ve learned along the way, and while FtK might be less overtly technical than albums like Come Death or Brutalitarian Regime, the songs themselves are, on average, both longer and more structurally complex than ever.

So, as you can imagine, there’s a lot to digest, and a lot to discuss.

On the positive side of things, the decision to go for a more “pure” Death Metal approach (i.e., more Cannibal Corpse, less Pantera) should undoubtedly please that vocal contingent of the band’s fans who’ve been clamouring for a return to “the old ways” for the past decade or so, and while I for one still think that a little bit of Dimebag can sweeten the pot when used properly, there’s no denying that the heavyweight grooves and shamelessly guttural vocalisations of “Skyggemannen” and “Movement of the Parasites” manage to capture a much more “classic” feel without sounding dated.

Not only that, but the extra breathing room engendered by the slightly (or, in the case of “Deal it or Die”, significantly) longer songs has given the band some welcome space to explore their more darkly melodic impulses, and tracks like “Bloodity”, “Whorezone”, and “InStructed InSanity” make full use of some seriously evil and eerie lead guitar lines to enhance the vicious vibe of the album (but not at the cost of its heaviness).

I do have a few reservations, however, that stop me giving this a perfect score (or would, obviously, if we actually gave numerical scores here at NCS).

For one thing despite still being as heavy and as hefty as ever, there’s a general sense that Fit to Kill doesn’t go for the throat with quite as much gusto as its predecessor (Union of Flesh and Machine), with only a couple of tracks (namely bombastic opener “Requiem Mass”, the neck-wrecking “Killing Machine Pt. 2”, and brutal closer “End”) delivering the same level of frantic intensity.

That’s not necessarily going to be a bad thing for some people, of course, nor am I saying that some of the other tracks don’t have their moments of apoplectic aggression either, but the overwhelming impression which FtK gives is of a notably slower and more groove-oriented record which, on occasion, overplays its hand a little, and which might have benefited from a tiny bit more judicious editing here and there.

It’s also worth pointing out that bassist Ole Madsen (who has since left the band) gets a little shortchanged as, while not completely buried in the mix, he’s not really given any time to shine this time around, which in turn contributes to the feeling that FtK is a somewhat less technical album than the rest of the band’s post-Come Death discography.

Still, it’s the riffs that are the star of the show, and this album is (as always) absolutely full of them, with perhaps my personal pick of the bunch being the obnoxious, Dying Fetus-esque chugathon that pummels its way out of the speakers part way through “End”, and I don’t doubt that anyone and everyone who listens to this record will find their own personal favourite that appeals specifically to them.

And that, perhaps, sums up the album’s key appeal. While it may not be the band’s best ever (that’s still either Altered…, Come…, or Union… in my opinion), it’s the sort of record where, if you’re even a little bit of a fan of Death Metal, you’re quickly going to find something to love.

It’s a record that doesn’t give a damn about fads or fashion, what’s cool or what’s trendy. All it cares about is guts, gore, and grooves. And it’s got plenty of all three.