(This is Andy Synn‘s review of the new album by the Ukrainian band White Ward, which will be released by Debemur Morti Productions on September 20.)

To say that White Ward are the band Ulver might be today if they hadn’t totally abandoned the Black Metal aesthetic would, probably, be an over-simplification.

Both bands are, after all, distinct entities in their own right, and to imply that the former are simply a more metallic variant of the latter would be to do them a major disservice.

And, yet, there’s more than a hint of Perdition City to the Ukranian quintet’s new album, whose unusual mix of biting riffs, moody jazz inflections and neo-noirish vibes purposefully eschews the more “traditional” aspects of Black Metal – the nature worship, the rustic spirituality – in favour of a sound that’s distinctly urban in both tone and texture, all neon and glass and cold concrete.

But whereas Perdition City was billed as “music to an interior film”, this one is much more physical and grounded. It’s the soundtrack to the world outside your window, a world of digital prophets and ephemeral profits, social media sirens and vicarious virtual violence. 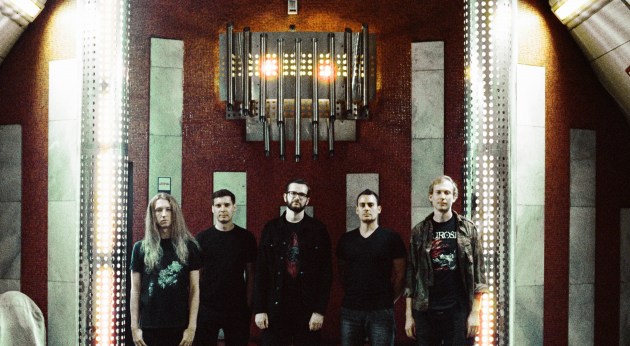 Of course White Ward aren’t the first band, or even the first Black Metal band, to focus their gaze on the misery and misanthropy of the modern world. Heck, Imperial Triumphant managed to capture the existential horror and creeping ennui of living in a city that never sleeps just last year.

But very few bands have addressed it in the way that WW do here, as a systemic failure of the human condition, a disconnection with ourselves and with each other, and a loss of something fundamental – call it love, call it empathy, call it what you will – that can’t be regained by simply wallowing in nostalgia or desperately pining for a return to “a simpler time”.

As a result there’s a profound sense of fatalism running through this album, one that reminds me of J.G. Ballard at his best and bleakest, a realisation that the future we were promised is simply the present, slightly embellished, and beneath the surface the same old issues and problems still persist.

This manifests itself in different ways across the length and breadth of the record, from the blend of nocturnal ambience and nightmarish catharsis that propels the opening title track (all eleven, existentially-anguished minutes of it), or the whirling dervish of raging fury and decaying, decadent beauty that is “Dead Heart Confession”, to the simultaneously sombre yet uplifting strains of “No Cure for Pain” and the brooding, blackened lounge-doom of “Surfaces and Depths”, with every single track making full use of the band’s diverse creative palette in order to fully bring their vision to life.

It’s an ambitious, grandiose statement, make no mistake about it. And, at a hair over sixty-seven minutes in total, occasionally a little overwhelming too, demanding a significant investment of time, energy, and attention to fully appreciate all the different layers and subtle nuances involved (many of which will likely only become apparent on your second, third, and fourth time through).

But it’s also (quite fittingly) an album whose greatest rewards are reserved for those most willing to truly open themselves up to and connect with it, and while its sheer length and daunting density might be off-putting to some, particularly during a song like “Uncanny Delusions”, which embodies every single extreme of the band’s sound in one shamelessly provocative package, I can honestly say that I’ve encountered very few albums this year simultaneously as scintillating and as soothing, as abrasive and immersive, as this one.