Over the last 30 years many metal albums have taken inspiration from the two World Wars, and have used episodes from those terrible conflicts to form lyrical themes, but few records have so breathtakingly channeled the unchained ferocity, the horrifying decimation, the mind-shattering fear, and the oppressive bleakness of total war as Sammath’s new album, Across the Rhine Is Only Death.

As the title suggests, and as the band explain, this new release (Sammath‘s sixth studio album in a career that now spans 25 years) is “a true tale of death and destruction”, conceptually focused on the final months of World War II when Germany desperately tried to hold the Rhine as its western border. Far from a celebration of war, it represents an effort — and a very successful one — to summon the horrific annihilation that humanity is capable of inflicting on itself. 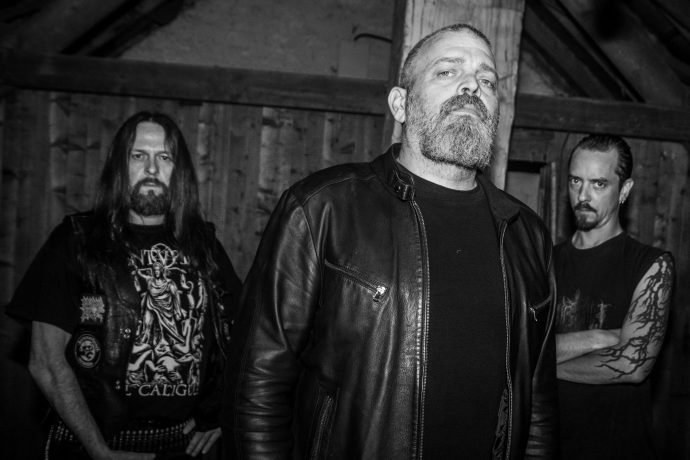 Raw, unchained ferocity has always been a hallmark of Sammath’s brand of black metal, but they have outdone themselves here. After a quarter-century of work, rather than sounding tired they have reached a summit of astonishing explosiveness in their music, manifesting an undiluted devotion and fanatical commitment to the concept that gave birth to this record.

Furious speed is the main gear across these eight tracks, and everything about the performances is breathtaking. New drummer Wim van der Valk‘s execution is absolutely jaw-dropping. It includes a wide range of patterns and progressions, from furious blasting to neck-snapping back-beats, from punk cadences to obliterating double-bass assaults, from maniacal fills to military tattoos and solemn marches, and the changes among them happen in the blink of an eye. Perfectly in keeping with the album’s inspirations, the drums sound like mortar fire, machine-gun fire, strafing runs, and detonating bombs.

Jan Kruitwagen‘s fretwork is similarly frenzied and rapidly veering. The riffing often has a grinding, mauling quality, with a heaviness of tone that amplifies the density and intensity of the barrage, while the leads create a contrast, rising above the tumult in electrifying fashion — just as freakishly unhinged, but often with a feeling of terrible grandeur as well. Kruitwagen’s extravagant screams and shrieks are also so scorching and crazed in their intensity that they make this frightening music even more terrifying. Those jugular-lacerating sounds also seem perfectly in keeping with the album’s concept, summoning both the death-dealing insanity of men caught up in the cyclone of battle and the unbearable pain of mutilation and mental trauma.

Meanwhile, Ruud Nillesen‘s bass work is just as fast as everything else, and its granite-heavy pulse in the low end adds to the overpowering sense that we are genuinely in the midst of a war zone, while also joining with van der Valk‘s snare beats to provide intermittent grooves that keep the listener from being completely overwhelmed by all the hurricane-strength chaos. 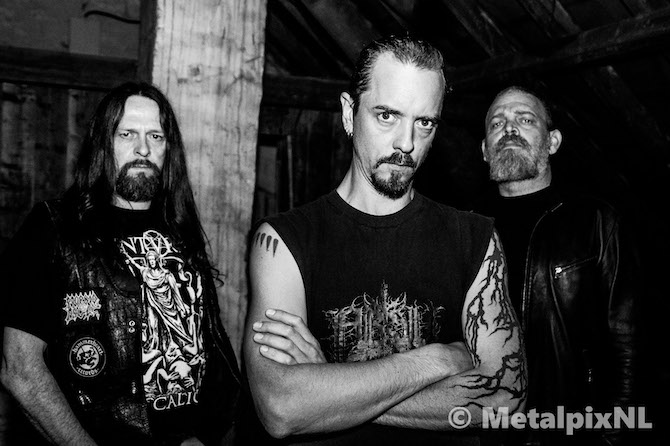 Stylistically, the new album is “war metal” in more ways than in concept. It’s an amalgam of death metal’s monstrous heaviness and raw black metal’s hateful aggression and cold cruelty, but the band also lean into grindcore’s maniac speed and sense of violence. Through that fusion of elements, Sammath have created music that really does take no prisoners. The intensity across the album is almost unrelenting. The riffing channels hysteria and sadistic cruelty as it whips and lashes and whirs like an industrial-strength circle saw or erupts in flurries of spidery, flame-throwing excess. To be clear, there are some strummed bits of head-moving heaviness in the mix, but mainly the sound is warfare incarnate. Yet the melodic currents in the music manifest the horror of war in different ways, by creating moods that are dismal and bleak as well as unhinged.

There are ingredients in each song that do distinguish them from each other, but it must be said that sheer violence is the dominating quality. The experience is relentlessly electrifying, but it’s the two songs on the album which are genuinely dynamic that stand out from the rest in terms of memorability, and they’re well-positioned in the running order.

Arriving just past the mid-point, “Totenhügel” is another savage, slaughtering war storm, but the furious intensity of the song abates, and a gloomy and grievous melody surfaces, ringing like the dismal and almost stately tones of a funeral march. It continues to make its presence known even as the head-whipping barrage resumes. The integration of those grim, oppressive, and crushing currents of melody within such a ravaging assault, and the head-snapping nature of the more metronome-like snare rhythms, makes the song stand out, channeling emotional extremity in different dimensions.

The other most memorable song is the title track, which is the final one. Of course, it’s hard-driving and crazed, but it also occasionally slows to a ponderous heaving march, made for the slow headbang, accented by a few gargantuan growls and an eerie trilling and flickering melodic lead near the end that really sticks in the head. The song raises visions of maimed soldiers hobbling through mud-choked roads, surrounded by the stink of their own bodies and of decaying corpses. Across this song is only death, and it ends the album in haunting, depressive fashion. 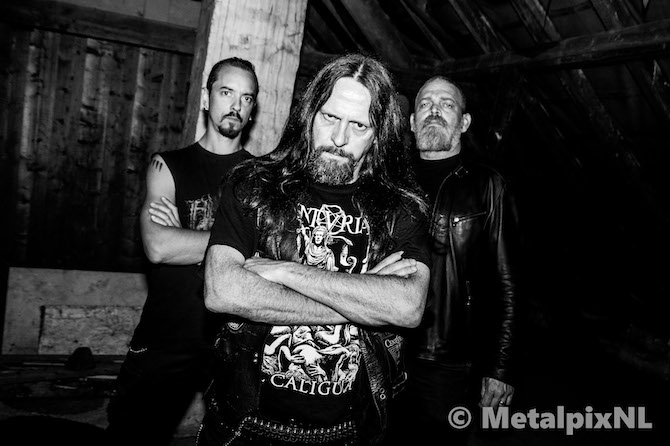 Across the Rhine Is Only Death will be released by Hammerheart Records on October 7th both digitally and in a variety of physical editions, including a limited edition in a wood box that includes shell casings unearthed from the actual battlefield that’s the subject of the song “Bitter Fighting Amongst the Dead” (the battle of Moyland Woods, February 1945).

2 Responses to “SAMMATH: “ACROSS THE RHINE IS ONLY DEATH””