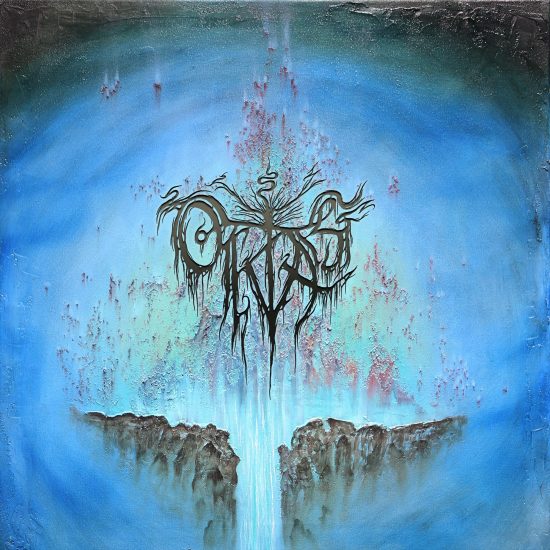 Genre hybrids within the general ambit of extreme metal tend to be hit-or-miss affairs, and perhaps more miss than hit the further the hybridized ingredients differ from each other. Yet when the creative splicing of divergent ingredients and tonalities truly succeeds, the experience can stand out in ways that don’t often happen in the general run of genre monochromes, and reward the constant search of metal adventurists for something different. In my humble opinion, the self-titled premiere EP by Oktas, which is being released today, is one of those stand-out successes.

By way of background, an okta is a unit of measurement used to describe the amount of cloud cover at any given location. That term became the basis for the name chosen by this group of Philadelphia musicians, led by visual and musical artist Bob Stokes (Drones for Queens), who performs vocals and bass, and including friends of his from previous bands — drummer Rob Macauley and fellow bassist Carl Whitlock of Dirt Worshipper, and minimalist composer Jason Baron from Cloud Minder, who plays the cello with Oktas. (We did mention unusual tonalities, and here we have two bassists and a cellist, but no guitar.)

As forecast, this new EP embraces a range of influences, from ambient minimalism to atmospheric black metal and epic doom metal (and I hear a bit of gloomy post-punk in the mix, too), woven together with a cinematic edge. Lyrically “based in the filth ridden streets of south Philadelphia”, as Bob Stokes has told us, the words transport us “to a world destroyed by mankind’s own hubris, plagued with endless war, constant natural disasters and humanity desperate for redemption”. 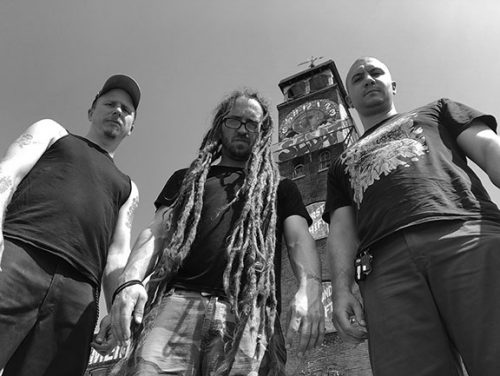 Another band might have left their most imposing track for the end of the running order, but Oktas put theirs right at the front, even at the risk of daunting listeners with its 12 1/2 minute length. On the other hands, there’s something to be said about putting your best foot forward, and “Alters of War” really is a stunner, and in this writer’s  view, the best of the EP’s three tracks.

Eerie, distorted, and increasingly unnerving droning tones from the cello open this long song in a way that begins to set the mood — and after a brief pause the mood of building tension deepens through the reverberation of long, heavy chords, matched with distant nattering voices and brief bass arpeggios. The appearance (and subsidence) of shining waves of cello melody add a different dimension to the mood, one that’s wondrous but mysterious. A new bass melody arises through simple harmonized notes that catch in the mind and create a feeling of introspection.

In due time, the rhythm section adds a mid-paced, compulsive beat, and then the bass-and-drum interplay begins to change, as a prelude to the crash and pulse of a heavy riff, shrouded in a haze of distortion. The rhythmic pulse remains potent within the crush and crash of sound, and the penetrating melodic motif (which has a depressive post-punk influence, as I hear it) rings out in scalding tones in a way that conveys angst and despondency. The vocals (which appear only rarely in all the tracks) don’t arrive until near the end of the track, and their harsh, death-metally tones (somewhere between a bellow and a roar) give the music a further dimension of harrowing extremity.

“Detritus” is a long track, too, though not as massive as the opener. Unlike the opener, there’s no intro, just the immediate vibrant pulse of craggy notes against a backdrop of sandpapery distortion and bursts of battering drumwork. The song’s immediate forward momentum increases in intensity, with the drum rhythm segueing into gallops and the riffing becoming increasingly frenzied and disturbing. The stringed instruments combine gloomy heft and feverish dementia, as well as emitting strands of melody that are deeply melancholy.

The building intensity heightens when Macauley begins to blast and the bass tones shiver and seethe. The energy crests and then slightly diminishes, the drum pattern becoming a methodical snap and thrum, and the stringed instruments transmitting bleak sounds of wondering and wandering — until the tension crescendos again in an electrifying storm of crushing rhythms and explosive fretwork that channels desperation. It’s a breathtaking and heartbreaking finale that will also leave you with sore neck syndrome.

“Silfra” is the last track on the EP, and ss described by Stokes when we premiered it in August, it’s “an epic, nature-worshipping doom ballad drawing hard influences from bands like Type O Negative, Isis, and Neurosis.” Like all the songs on the EP, dual bass performances (or in this case a triple-bass onslaught) deliver the weight and carry the melodies in the song, accented by Baron’s cello. The range of tones coaxed from the bass guitars are again one of the song’s many astonishing attractions.

It opens with a catastrophic barrage of sound. Grotesquely distorted strings and bone-fracturing drumwork combine to create a wash of caustic abrasion and stupendous grooves. The brutal ministrations of the bass and the crash of cymbals stand out as the song proceeds, with reverbed howls and screams ratcheting the music’s intensity even higher. The bass converts to a diseased buzzing sound as the drums rumble, conveying a sense of illness and moaning misery, but also creating mental images of arms outstretched for help. That sense of desperate yearning becomes more penetrating as the melody rises in trilling vibrations.

The deep grinding undertones and crushing percussive blows continue driving the track until about 4 minutes in, when the song takes a sharp detour with the moody sounds of the cello and rippling, layered ringing notes over a catchy bass pulse. A sense of hopefulness, or at least wistfulness, comes through in this soft and spellbinding passage, and it seems to persist even when the music begins to surge again. The transition is beautifully done, and from there forward the bass instruments soar and plummet through an extravagant range, both in sound and in mood, as the drummer himself shifts through morphing percussive patterns.

The entire trip is little short of stunning, and so is the EP as a whole. As you can tell, this has become one of my favorite short releases of the year

As noted at the outset, the EP is being released today (with cover art by Bob Stokes), which will coincide with an art show by him at the Grindcore House Cafe in Philadelphia in conjunction with Dark Arts and Craft. The EP is available now through Bandcamp: