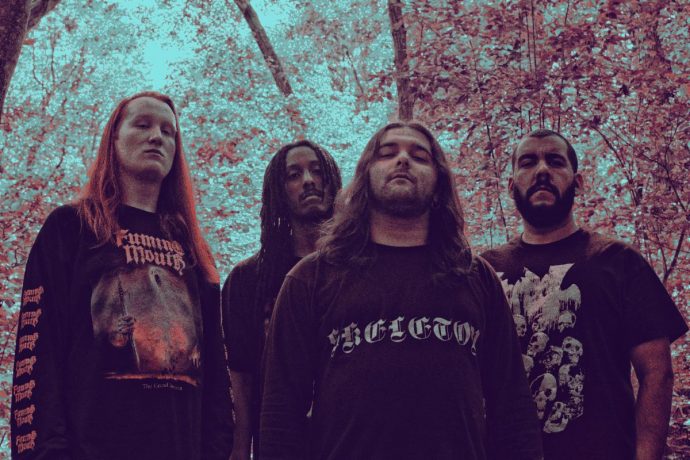 (In this article Andy Synn reviews new albums by the Texas band Creeping Death (due for release today via eOne) and Denmark’s Baest (out now on Century Media).)

2019 has, I think we can all agree, been a banner year for Death Metal.

Old bands have rekindled their flames, new bands have exploded into life, and several bands previously on the cusp of greatness have finally stepped up to seize the torch for themselves.

But there are two albums not mentioned on the above list, one of which came out a few weeks ago, the other which is being released today, that you shouldn’t let pass you by, and those are Venenum by Danish death-dealers Bæst and Wretched Illusions from Texan tormentors Creeping Death. 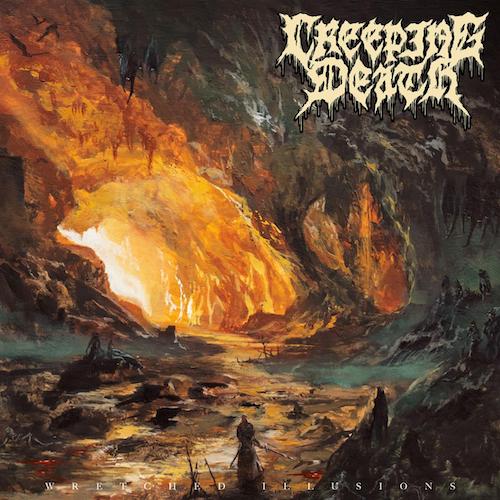 Of the two albums I’d argue that Venenum is the stronger effort, showing the greatest variety in structure and tempo, as well as some welcome (and impressive) growth from the band’s debut.

That doesn’t mean that Creeping Death haven’t also grown since the last time we heard from them (2018’s Specter of War EP) though.

In fact, I’d say that Wretched Illusions showcases a band finally growing into themselves, shedding whatever nascent “Hardcore” influence they may have once had in favour of a much more pure and primal form of Death Metal that embraces just the right amount of Thrash influence (the band themselves namecheck early Sepultura in their press materials, and you can see/hear why) to give it an extra dash of explosive energy.

The other two bands frequently referred to when talking about this album are Grave and Blood Red Throne, and it’s not hard to understand why this is the case, as songs like brutish opener “Ripping Through Flesh” and “Bloodlust Contamination” ably capture both the gritty grimness and Old School evil of the former and the gargantuan grooves and pneumatic power of the latter, while still sounding surprisingly fresh and vibrant.

Of course, it could be argued that CD take a little too much inspiration directly from their primary influences as some of the album’s more melodic touches (during “Sinner’s Torch” and “Corroded From Within”, for example) come across like direct call-backs to the sound of albums like Into the Grave and You’ll Never See…, while some of the heaviest, hookiest riffs on tracks such as “World Decay” and the previously mentioned “Bloodlust Contamination” (two of the album’s biggest, most bombastic highlights) steal rather liberally from the Come Death/Souls of Damnation playbook.

Yet it seems churlish to criticise the band too strongly for wearing their influences so proudly on their collective sleeve(s) when you consider that a) the album is no less ferocious, and no less fun, because of this, and b) other bands have done so far more egregiously and with far less flair!

Truth be told, the only real criticism that can be levelled at Wretched Illusions is that many of its ten tracks share quite a similar structure and dynamic, which means they do, on occasion, blend together a little bit.

That being said, in the heat of the moment you’re very unlikely to be bothered by these minor quibbles, and when songs like “Captivity” and the relentlessly pummelling title-track start to wrap themselves around your brain-stem and squeeze… you won’t want them to stop. 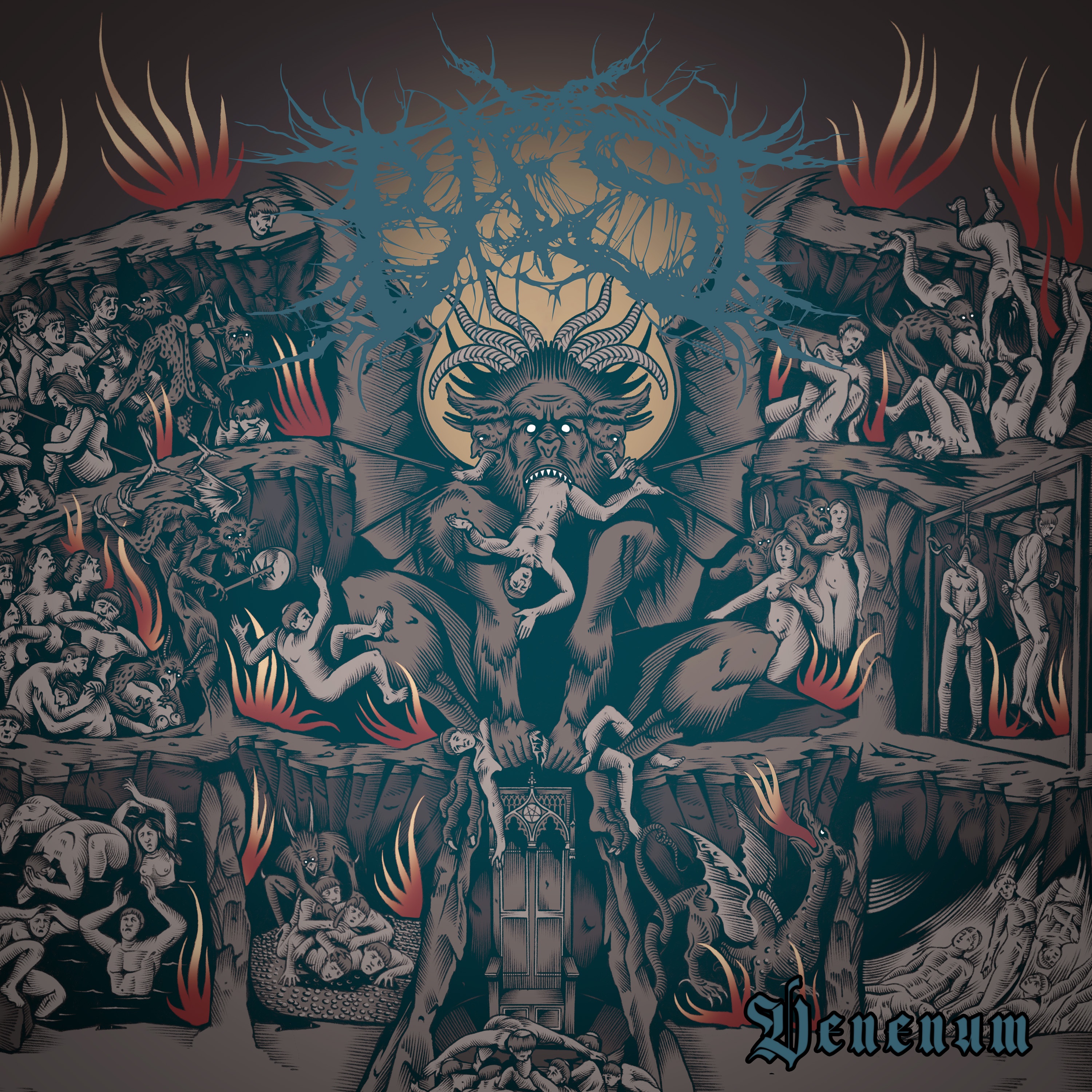 In contrast to Wretched Illusions, Bæst’s second album is clearly a record written by a band who have not only already fully established a sound and identity for themselves (with their debut album coming this close to making a full appearance on my 2018 Critical Top Ten list) but who are already starting to flex their ever-growing muscles in order to see what they can really do.

The way this increased confidence (and hard-earned muscle) manifests itself is subtle, but notable all the same. It doesn’t involve any major changes – the fundamentals of the band’s sound, a large dose of Bloodbath, a dash of Misery Index, with maybe some added Hypocrisy for flavour this time around, remain largely the same – but the tweaks to the formula, the willingness to incorporate a little more dynamic range into their songwriting, all combine to make Venenum a smarter, sharper, and altogether more savage beast than its predecessor.

This increasingly varied dynamic approach applies both within and between the various songs presented here, with the Danish quintet switching between hellish, high-speed intensity (“Vitriol Lament”, “Venenum”), stomping, slow-motion heaviness (“Gula”, “Heresy”) and sinister melodic menace (“Nihil”, “As Above, So Below”), as the record progresses, balancing form and function while also ensuring that each and every track has its own internal version of this same dynamic.

“Vitriol Lament”, for example, incorporates some stunning grooves alongside its normal array of neck-wrecking, whiplash inducing riffs, while “Gula” similarly includes some shocking explosions of blast-fuelled frenzy, and “Nihil” stomps and scorches as much as it slithers, and so on and so forth.

If there’s one major misstep that Venenum makes it’s the inclusion of enigmatic, but ultimately expendable, instrumental interlude “Styx”, which brings the album’s otherwise unstoppable momentum to a screeching halt just after the title-track has finished accelerating your heart-rate to its maximum.

It’s an odd, and counterproductive, choice, and while it undoubtedly adds even more variety to the album, it definitely feels like the overall package would have been stronger without it.

Speaking of momentum… it’s always risky when a band seems almost too prolific to be true, but thankfully the quick turnaround between Danse Macabre and Venenum looks to have been more about Bæst maintaining, and capitalising on, the impetus developed over the course of 2018, rather than an example of a band rushing into something they weren’t prepared for.

You can hear it in a song like the monstrous “Sodomized”, whose near-perfect balance between classic, instantly recognisable Death Metal moments and sharper, more modern hooks, makes it one of the record’s most killer cuts (though, truth be told, they’re all pretty much all killer, no filler).

This song also epitomises the album as a whole, in that Venenum is about a band refusing to rely solely on nostalgia for their success, and instead opting to drag the morbid corpse of Death Metal kicking and screaming into the present so as to introduce it, in all its glory, to a new generation.

And, honestly? They couldn’t ask for a better introduction.