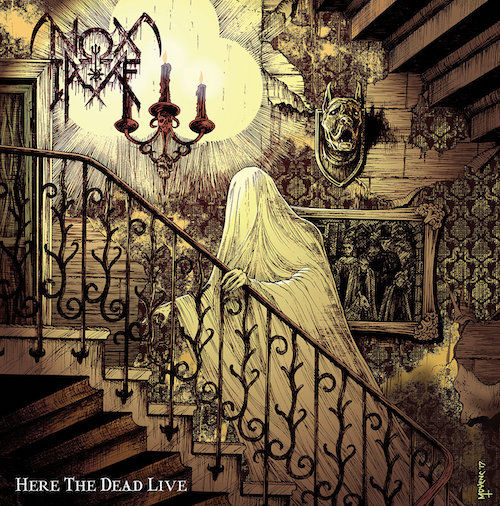 From the ashes of two storied French death metal bands, Catacomb and Affliction Gate, a hellish new formation has arisen under the name Nox Irae. The combined experience of these veteran members, as well as the range of their interests, is lividly on display in the band’s new EP, Here the Dead Live, which will be released by Transcending Obscurity Records on November 15th.

Transcending Obscurity has an extensive list of references as a jumping-off point for the music, dropping such names as Morgoth and Death, Demolition Hammer and Kreator, Asphyx and Bolt Thrower, among others. And it turns out to be a useful list once you listen to the music, including the song we’re premiering today. As “Knife Under Throat” proves, Nox Irae‘s song-writing talents are formidable, capable of creating music that’s bone-breaking in its heaviness, crazed in its savagery, ghoulish and sinister in its atmosphere, and highly contagious in the catchiness of its riffs. 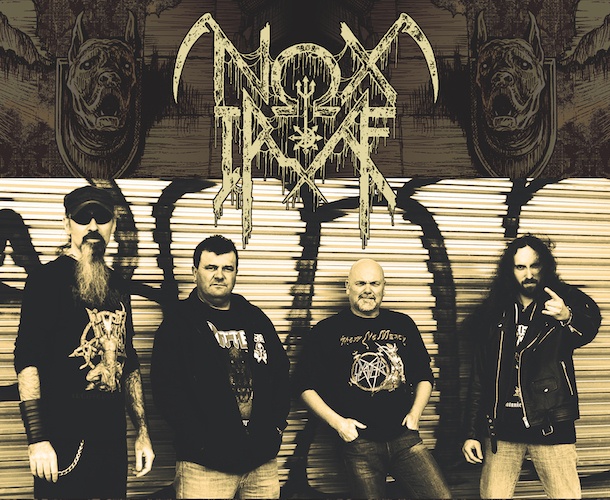 A fiendishly good thrash riff launches the song in electrifying fashion over a gut-thumping beat, and the gravel-throated roars of Affliction Gate’s Herostratos adds to the electricity of the song, his voice sounding both tyrannical and bestial at the same time. The drumming favors neck-snapping rock rhythms (with bursts of double-bass to heighten the intensity of the band’s more marauding surges), while the riffing jolts, jabs, and buzzes in grim, cruel, tremolo’d frenzies or blares in long, dismal, mutated chord progressions.

The song really is highly infectious, but also gruesome. A slow, morbid guitar melody leads to a ghoulish, lurching stomp, with that sickening melody in the middle of it — and then the band attack again in an even more barbaric assault than before, accented by a shrieking solo. When Nox Irae reprise the earlier movements, digging them even further into your head, they add another wild solo, even more feverishly lunatic than before.

Here the Dead Live really is the kind of album that hungry fans of evil old-school death metal should eat up with both hands, a record created with fire and flair and skull-busting brutality that won’t wear out its welcome. Below you’ll find links for info about pre-orders and further info about the band, along with both our premiere and a stream of the previously released track “All Is Over“.

One Response to “AN NCS PREMIERE: NOX IRAE — “KNIFE UNDER THROAT””