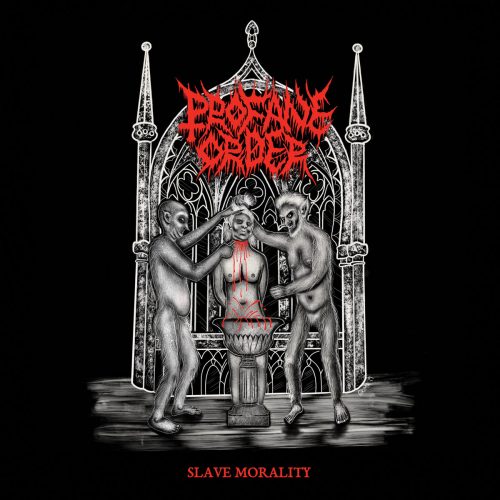 The channeling of fury and violence, boiling over into chaos, has been a strain of extreme metal for decades, reaching its apotheosis in sectors that combine “the cold and malefic grimness of black metal with the most bludgeoning strains of death metal and the blind terror of grindcore” (to quote from the press materials for the debut album that’s the source of the following premiere). At its most unhinged, these black/death abominations of sound become such willfully abrasive, brutally distorted assaults on the senses that sometimes they seem to have no objective other than winning an arms race for who can abuse listeners most sadistically.

Well, one person’s poison is another person’s meat. The musical rendition of large-scale violence, whether spawned by imaginings of biblical apocalypse or nuclear holocaust, or the mutilations of more conventional weaponry, can be thrilling. Whether it comes from the cathartic exorcism of our own violent impulses or the fight-or-flight adrenaline kick that comes from being in a war zone, even if your own life isn’t at risk, the excitement can be undeniable, despite (or because of) all the storming ugliness.

But when a band are capable of producing apocalyptic levels of violence AND doing that with actual riffs AND with melodies you can actually detect and remember (in a genre where “melody” is a dirty word), that makes them stand out. And that brings us to Montréal’s Profane Order.

As exciting as a lot of warlike black/death rampages may be “in the moment”, much of it tends to blend together into an undifferentiated mass. You can run the gauntlet of an entire album and have a damned hard time figuring out where one song ends and the next one begins, and no hope of remembering any of them five minutes after the album is over.

What gives a song at least a bit of its own distinctive character? What makes you remember it, or brings it immediately to mind when you begin listening again? Profane Order have figured that out. This song we’re presenting today, “Hexed (Defiling God’s Child)“, is good proof of that.

Profane Order demonstrate right away that they know how to bring the aural terrorism, delivering a roiling mass of guitar distortion undergirded by thunderous bass, obliterating drumming, and shrieking, swirling soloing. Pure rage erupts from the vocalist’s throat, in scorching howls of blood-red fury.

To be sure, the sound is abrasive and hateful, but it’s not utterly saturated in distortion. You can make out what’s happening — and the riffing changes. It rises, writhes, and falls in a display of dismal yet boiling, plague-like infestation. In the mood of its melody (and yes, there is a melody) it seems to straddle a line between misery and malefic majesty. And the riffing changes again, delivering physically compulsive, jolting sensations.

And so the song is in a violent sweet spot — dense but not suffocatingly murky in its sound, a blend of belligerent anti-melody and mortifying harmony, an amalgam of remorseless bludgeoning and head-hooking, carnal pulsations. Something you can actually latch onto. Something you can remember.

“Hexed…” comes from Slave Morality, the second album of this Canadian strike force. It follows a 2016 debut album (Marked By Malice) and a 2017 EP (Tightened Noose of Sanctimony). It will be released on October 18th by these three labels: Sentient Ruin Laboratories (LP), Krucyator Productions (CD), and Les fleurs du Mal (cassette tape).

Pre-order info for all editions can be found below, along with our premiere and the stream of a previously released track, “Perverse Demoniac“.