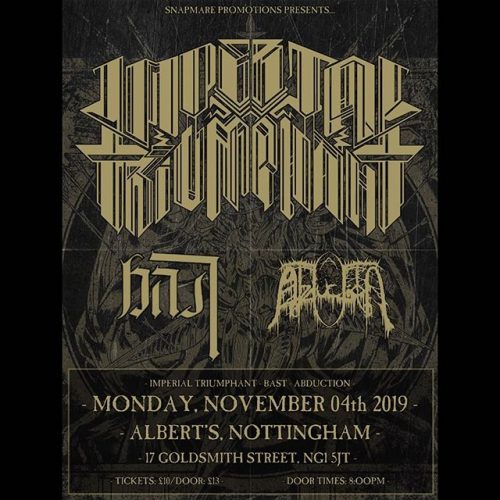 (Andy Synn was fortunate to catch the Nottingham stop on Imperial Triumphant‘s current European tour, with support at the show by Bast and Abduction, and transmitted the following report along with videos of the performances.)

If you’re not at least a little bit concerned about the state of the underground Metal scene in the UK then you’ve not been paying enough attention.

It’s nothing to do with a lack of talent, by any means, as there are innumerable bands out there right now who are all more than capable of going toe-to-toe with the best that the rest of the world has to offer. No, the real concern is a combination of two factors.

First, there’s the ongoing gentrification of our inner cities, with rising rents and rapacious developers continuing to exert crushing pressure on our small-to-mid-sized venues (we’re losing two of my favourites, Temple of Boom in Leeds and The Flapper in Birmingham, very soon), which in turn results in both greater competition for dates between bands as the live circuit contracts and more and more promoters/venues pivot towards courting more profitable, mainstream-friendly fare.

Then there’s the ongoing travesty of Brexit which, regardless of the politics behind it, is going to make it much more difficult for small/medium sized bands to tour the EU, and is likely to also cause problems for foreign bands wanting to tour the UK (where the margin of feasibility, when all costs and logistics are summed up, is often razor-thin).

So please, make sure to support your local promoters and local venues whenever and wherever you can. Because without them gigs like tonight’s extraordinary experience just wouldn’t be possible. 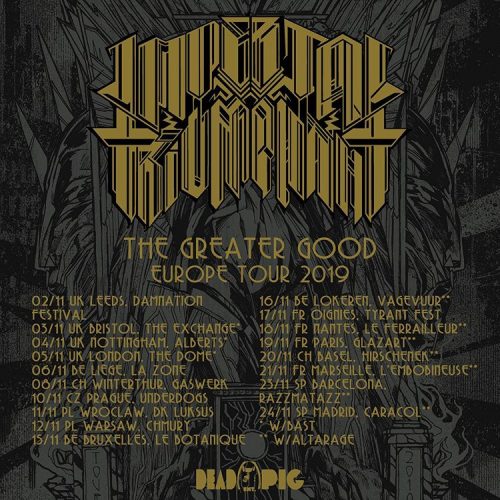 Scrappy openers Fatalist, down from Leeds for the show, kicked things off with a set that was not particularly good, not particularly bad… just kind of ok (hence why there’s no video of them to accompany this short write-up).

That being said, there’s definitely some promise to their stripped-down, slightly atmospheric, approach to Black Metal, so we’ll see how they’ve developed a little further down the road, shall we?

The evening really kicked into gear when Abduction hit the stage though, immediately upping the intensity of the evening ten-fold.

As someone who’s watched from the sidelines as the band have grown, from humble beginnings as a one-man, primarily studio-based, act, into the more fleshed-out five-piece we see this evening (even if the additional members are all only for live performances), it’s also been a pleasure – a grim, gruesome one, but a pleasure all the same – to experience the similar growth in the band’s musical output and scope along the way.

Tonight this manifests itself in a sound that’s much darker, much grimier, and much more claustrophobic, than I think a lot of those attending expected, with the band’s material (particularly the tracks taken from this year’s All Pain As Penance album) landing somewhere between the dissonant horror of Leviathan and the doomier side of Abyssal, with the occasional passage of hypnotic, Mgła-esque riffage included to sweeten the deal.

Granted, there were still a couple of slightly sloppy musical moments (and the bass lines could do with a bit of a spruce-up too), but the overall impression was of a band with a very bright (albeit bleak) future ahead of them if they keep this up.

Not that that’s a bad thing (their drummer’s got a mean blast on him, and the music in general is certainly dark enough to hold its own), I just thought it was an interesting coincidence.

Tonight’s set provided a great mix of sickeningly heavy Sludge riffs and drawn-out, doom-laden dynamics (juxtaposed against occasional spasms of vicious velocity) all designed to draw the assembled audience in through their sheer, inescapable gravity.

It was a compelling, immersive set, made all the more so by the clever vocal interplay between guitarist Craig Bryant and drummer Jon Lee, who together bellowed and barked, sang and snarled, their way through the set without missing a beat (or a chord).

As enjoyable as both the previous bands were, though, everything else paled into insignificance once Imperial Triumphant (finally) hit the stage.

It would be cliché to talk about the band’s performance this evening as “controlled chaos”… this was more than that. This was chaos harnessed and given purpose and then allowed to run rampant.

Don’t get me wrong, the control exercised by the trio was spellbinding – it takes a very special band to make something so bad sound so good, to turn something so horrifying and off-putting into riveting performance art – but this was still one of the most avant-garde, anarchic (yet still terrifyingly methodical) sets I’ve ever had the good fortune to witness.

The set itself was mostly comprised of material from last year’s phenomenal Vile Luxury (if memory serves they definitely played the entire opening quartet of “Swarming Opulence”, “Lower World”, “Gotham Luxe”, and “Chernobyl Blues” over the course of the evening) along with select cuts from several of the band’s previous releases.

And while apparently every night of this tour has featured an entirely different setlist (including one brand new song at each show, which I believe I’ve captured on film below), the fact is that the band could have played the same songs, in the same order, every single night, and still provided a different experience every time, such was the insane amount of improvisation and experimentation involved in their performance.

Described by a very good friend of mine (who I talked into going to see the band down in London last night, even though he was totally unfamiliar with them) as:

Imperial Triumphant aren’t so much a band you enjoy, as one you endure, just for the sheer thrill of experiencing something so far outside your comfort zone.