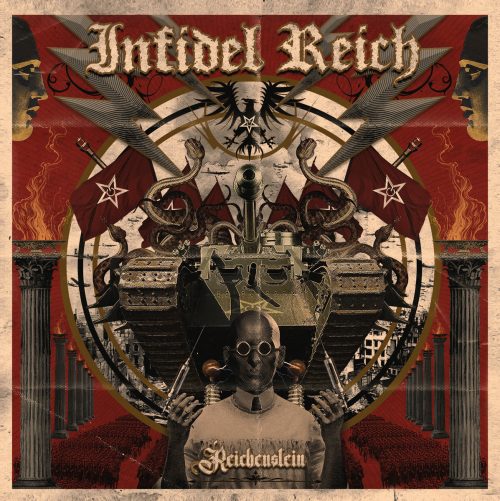 Ex-Asphyx drummer Bob Bagchus and Acheron frontman Vincent Crowley, who’ve been friends since 1991, finally got fed up with what they perceived as an overdose of political correctness in the metal scene, and decided to do something about it. Determined to express their disgust with a culture in which “everything is offensive and so-called victims are a plenty” (as Crowley put it in an interview), they collaborated to create Infidel Reich, a head-moving riff machine that now includes early Asphyx guitarist Tony Brookhuis and a bassist named McNasty.

The band’s name is itself intentionally provocative, though not intended to convey any political, religious, or racist dogmas. The “Reich” refers to the band’s own self-contained “empire”, while the name of their debut album, Reichenstein, is a play on Mary Shelley‘s classic novel, and (like the cover art by Triple Seis Design) was conceived as a way of capturing the monstrosity of the musical beast created by this band of metal mad scientists.

Musical inspirations of course come from a myriad of experiences and convictions, and no doubt those which animated Infidel Reich will succeed in pissing off some segment of the listening public before they hear a single note of Reichenstein. It’s hard to shed any tears over that, because that’s exactly what Infidel Reich anticipated. On the other hand, those who reject the particular kind of disgust and rage that drives this album will miss out on a remarkably well-crafted and relentlessly addictive collection of songs which successfully integrate a wide array of old-school heavy metal traditions. 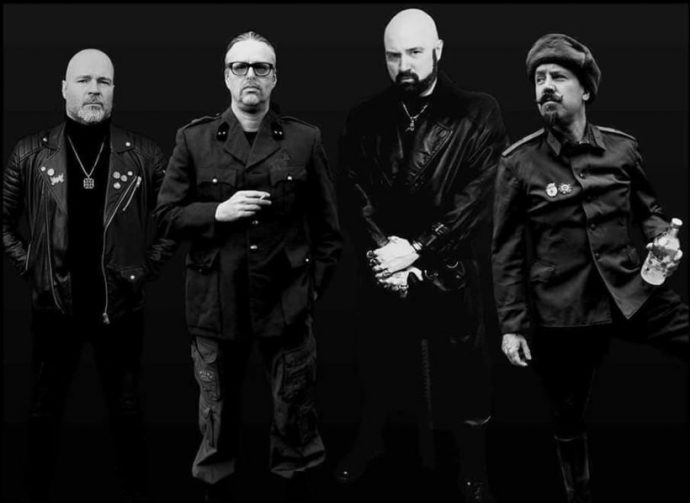 It’s not difficult to identify many of the main influences in the music, which the band have acknowledged, ranging from Motörhead and Carnivore to Venom, Sodom, and Bathory. What makes the album such a hellish joy to hear is how well the band have so seamlessly stitched these influences (and others) together.

The songs have well-defined structures (they are indeed actual songs, with verses and choruses), but all of them incorporate varying segments that somehow are all individually infectious, to an extreme degree. Consistent with that kind of classic songcraft, and with the importance to the band of what inspired this endeavor, the lyrics are mostly intelligible, even though Vincent Crowley‘s amalgam of bestial snarls and carnivorous growls are nevertheless absolutely livid in their viciousness.

The title song, which opens the album after a scene-setting intro, exemplifies these qualities, integrating punk rhythms and fiery chords with flickering leads and off-kilter drum beats, accented by a scorching solo that helps send the music triumphantly soaring.

Punk-ish cadences and hammering chords reappear more than once, as in the virally infectious “Victims Inc.”, which also includes riffing that’s fast-jabbing and seething, and “Gunzilla’s Stand”, which also includes savage blaring chords, bounding bass lines, and a whirling lead, and creates a changing sensation of galloping barbarity mixed with neck-wrecking chuggery and ghostly melody.

There’s more glorious soloing scattered across the album (perhaps most extravagantly in the dual-guitar solo that caps “Reich & Fucking Roll”), and while the album frequently will give you the adrenaline kick that comes from full-bore assaults (such as the rumbling tank attack of “Killing Cultures”, which is both bleak and feverish, and the combination of screeching delirium and cold-blooded cruelty channeled by the searing leads and pneumatic pounding of “Standby For Revolution), there’s more to be found in Reichenstein than martial mayhem.

“Selling Salvation”, for example, is a slow, morbid crawl, steeped in an atmosphere of festering decay — though it becomes a brutish but highly headbangable piece of enraged ferocity — and “Nuclear Showdowns” is a mid-paced, mean-eyed, gut-busting rocker that winds up switching tempos and needling the skull with a demented and discordant lead. 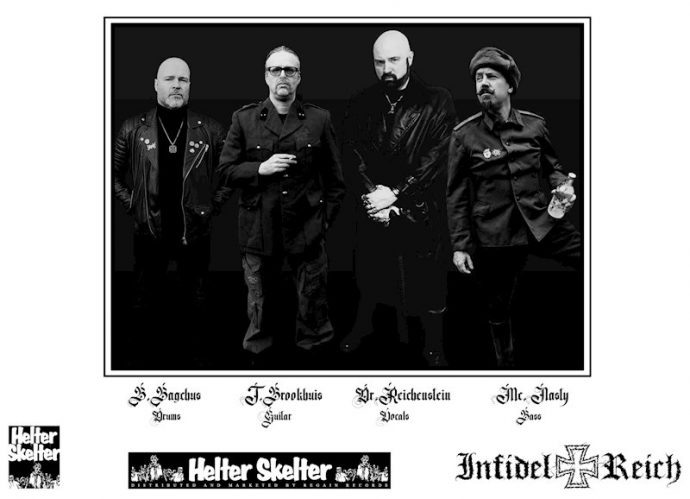 And with that, we’ll bow out and leave you to experience our complete streaming premiere of the album, which will be released on November 15th by Helter Skelter Productions (with distribution through Regain Records) on CD, vinyl LP, and cassette tape formats, as well as digitally.