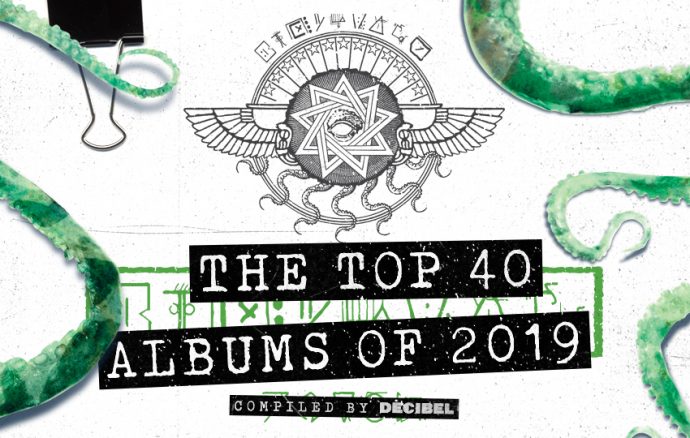 Wow, it’s already that time of year again. It has become an annual tradition at our putrid site to launch our year-end LISTMANIA orgy with the appearance of DECIBEL mag’s Top 40 list. It has become a tradition in part because, in my humble opinion, it’s still the best print publication out there for fans of extreme metal, and also because they always manage to jump out of the starting blocks first in the race for publishing YE “best of” lists – and they’ve done it again this year, though this year it took me by surprise. I think I’m still stuck in October. Anyway, here we go again!

The DECIBEL list will officially appear in the magazine’s January 2020 edition, which hasn’t yet hit my own mailbox, but DECIBEL again decided (for the fourth year in a row, or maybe the fifth) to scoop their own list rather than letting leeches like me leak it. They published the list on-line yesterday, and so I can now again re-publish their list without too much guilt, beyond the sheepishness that comes from being one of the factors that forced them to start outing themselves in the first place.

Of course, there will be a lot more content in the January issue (which has Blood Incantation on the cover), including commentary about each of these 40 albums and why they were selected, as well as dozens of contributor-conceived year-end Top 5 lists, a Hall of Fame feature on Madball’s Set It Off, and a brand new Carcass picture flexi disc containing the band’s first new song in six years,. You can order a copy of that HERE. 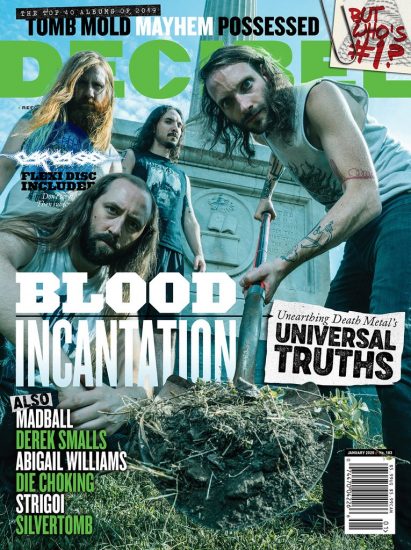 Such lists continue to serve several useful purposes. One, of course, is to introduce fans to albums they may have overlooked. I also know people who don’t buy much music during the year and actually wait to read year-end rankings before preparing their shopping lists. And, perhaps most obviously, they give us something to discuss and argue about. Because apparently we don’t have enough to argue about already, even in the age of Trump.

I usually try to hold my own comments to a minimum when I post these year-end lists from print publications and “big platform” sites, mainly because I can’t manage to make a list of my own. But here are a few observations about this one, just to get the conversation started — though I do hope you’ll continue the discussion in the Comments to this post.

First, none of these albums was self-released; all were backed by labels, although a few of them are quite small and obscure. Make of that what you will. Among these 40 label releases, a whopping six came from 20 Buck Spin and three from Gilead Media, which gives the two Migration Fest organizers 20% of the whole list. Four others were released by Relapse, and six other labels had two albums each on the list (Profound Lore, Season of Mist, Prosthetic, Nuclear Blast, Metal Blade, and Dark Descent, with the latter having two in the Top 5).

Second, as the person responsible for our weekly SHADES OF BLACK column, and therefore someone who spends a lot of time each week listening to new black metal, I’m usually disappointed by how few BM (or “blackened”) releases find their way on DECIBEL’s list. Last year there were six. But this year the number jumped to 10, with honors awarded to Abbath, Misþyrming, Schammasch, Falls of Rauros, Funereal Presence, Darkthrone, Obsequiae, Mayhem, False, and Blut Aus Nord, with the latter two in the Top 10 (the number goes to 11 if you include Mizmor). As expected, there are a lot of big household names in that group, which crowded out other names that belonged,

Third, I shook my head when I saw other names that I thought were a real stretch for a Top 40 metal list, particularly a Top 40 list that’s supposed to be focused on extreme metal, and shook it more vigorously when I saw one of those sitting in the No. 2 spot. That’s not the only head-scratcher in the rankings either. And, for my tastes, there are some genres represented here that I just don’t care that much about, and albums in those categories that just made me yawn, if I ever got past the first track.

But I will also say, as I do every year when I see what DECIBEL has compiled, that the list includes a decent number of deserving names, even judged according to my own nasty tastes — including the one at the AOTY spot.  You might not agree that Blood Incantation‘s new one is the best full-length of 2019, but it certainly deserves to be in the conversation.

34 Candlemass, The Door To Doom, Napalm

27 Schammasch, Hearts of No Light, Prosthetic