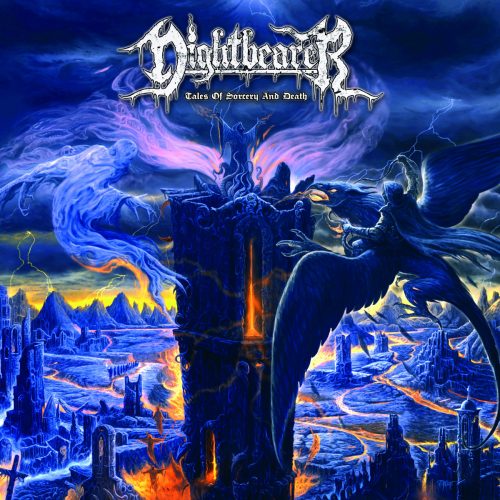 Once upon a time our site had a recurring feature called “Eye-Catchers”, in which we chose music to explore based solely on the records’ cover art. Had that feature not been laid to rest, Nightbearer’s debut album Tales Of Sorcery and Death would have been an obvious and undeniable choice. Seriously, just look at that stunning cover art by the great Juanjo Castellano Rosado!

But in the case of these German death-dealers, we also would have been very interested in their new album based on the strength of their first release, the 2018 EP Stories From Beyond (which is definitely worth tracking down (here) if you haven’t heard it). There’s a song on that EP named “Ferocious Sorcery”, and that title captures much of what makes the band’s sound so transfixing.

Nightbearer’s penchant for interweaving paranormal themes and necromantic artistry into their brand of Swedish-style chainsawing brutality is lavishly displayed on the new album, which draws from the realms of fantasy and horror for its lyrical themes, influenced by the writings of such masters as J.R.R. Tolkien, George R.R. Martin, and Stephen King. And today we have a prime example in our premiere of the aptly named “Lycanthropic Death Squad“, in advance of the album’s release by Testimony Records on Friday the 13th of December. 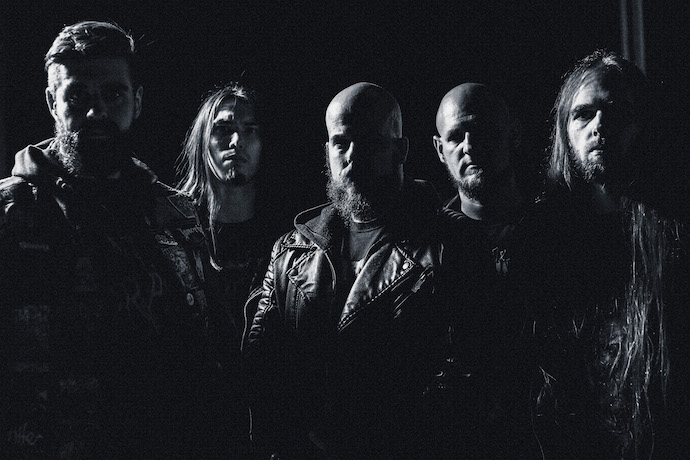 For Swe-death addicts such as this writer, having our skulls plundered by riffs fueled with massive HM-2 distortion always makes us weak in the knees and leaves us slobbering for more, and that’s part of what “Lycanthropic Death Squad” delivers. Those gargantuan sounds are matched by bone-busting heaviness in the drum-and-bass rhythms, which are brute-force neck-wreckers. When the band shift into higher gear, the song becomes a battering gallop, and the music’s brutal aspects are further enhanced by the livid bestial voraciousness channeled by Michael Torka‘s savage growls and and strangled howls.

But there is indeed sorcery in the music too, thanks in part to the queasy and quivering leads and a mercurial bass line which rises to the surface as a prelude to a dose of viciously jabbing riffery and a swirling solo that’s the sound of perilous black magic. An aura of grim heaviness hangs over the music, but the song is equally a display of feverishness and fire, with two more of Dominik Hellmuth‘s solos near the end of the song giving this mauling musical juggernaut a counter-balancing sensation of splendorous madness. 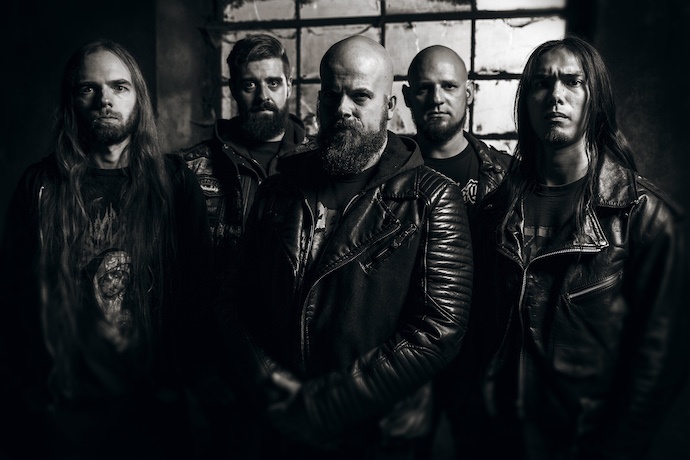 “Lycanthropic Death Squad” is the second single to be released so far from Tales Of Sorcery and Death. Below you can also check out the album’s opening track, “Beware The Necromancer“.

One Response to “AN NCS PREMIERE: NIGHTBEARER — “LYCANTHROPIC DEATH SQUAD””