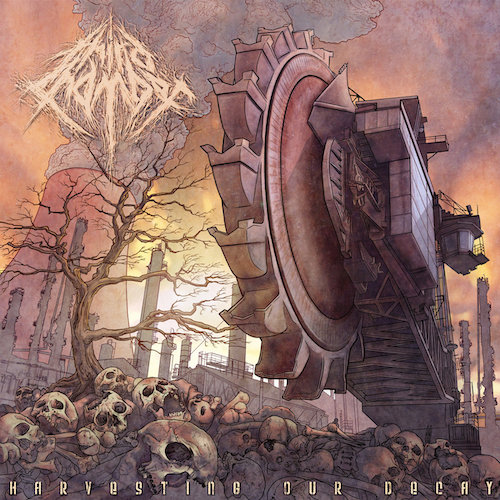 Although Harvesting Our Decay is the debut EP by Calgary-based death metal band Third Chamber, this is another example of a band whose members have a long history in the underground scene, in this case having performed with numerous Calgary groups, including Culled, After Earth, Meddigo, False Flag, WAKE, Disciples of Power, Exit Strategy, and Razorwing. And as some of those names suggest, Third Chamber‘s line-up — drummer Dustin Hahn, guitarists Jamie McIsaac and Jay, bassist Russ Gauthier, and vocalist Shane Hawco — have brought elements of grindcore and hardcore into their death-dealing metal.

The result of their collaboration, as vividly revealed on Harvesting Our Decay, is music that’s explosively powerful, making ample use of pulverizing grooves, maniacal riffing, and hair-raising vocal ferocity, while also paying attention to tempo dynamics and incorporating an array of dark melodic flavors that help give the music a memorable character.

The band will release Harvesting Our Decay on November 22nd, but we’re giving you the chance to check out all 21 minutes of it today. 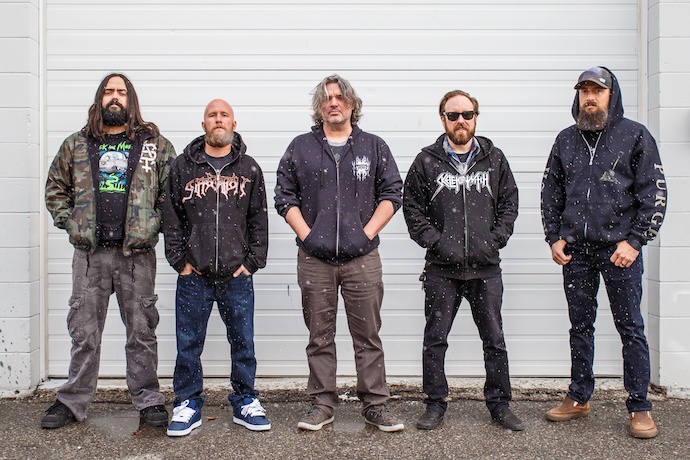 Third Chamber reference such influences as Black Dahlia Murder, Suffocation, At the Gates, Misery Index, and Napalm Death. As noted above, there’s some obvious hardcore influence in the music as well, perhaps especially in the politically charged lyrics, which become (in the words of their advance press) “a brutal reflection of the current state of the world. From negative motivations of religious organizations, the effects of social media on mental distress, the ever-growing pride of ignorance, the exploitation of our natural resources for the profit of the wealthy and the manipulation and lack of actual truth in most media consumed by the ever-growing bewildered herd”.

As a “mission statement”, the EP’s opener “Parasitic Communion” could hardly be better. A freakish jittery riff and blaring chords combine with explosive pile-driving grooves and scorching vocals to deliver a breathtaking shock-and-awe campaign. The bass becomes a maniacal pulse, and the drumming is absolutely obliterating, whether the drummer is delivering bunker-busting detonations or spit-fire snare cascades and skull-rattling progressions. Even here, though, the band switch things up, slowing the pace to open the field for bleak melody, moodily bubbling bass tones, truly incinerating shrieks, and ultimately a wailing guitar solo that transmits feelings of misery and desolation.

The band’s knack for blending grooves that threaten spinal trauma with vicious, seething riffage and harrowing vocal intensity comes through again in “Mind Rot“, a fast-moving, technically impressive scorched-earth assault laced with jolting rhythmic hooks and driven to a zenith of frenzy by a face-melter of a solo. And while the jackhammering start-stop grooves in “Choke” make it perhaps the most highly headbangable experience of the whole album, the band alternate those compulsive body-shaking assaults with bursts of high-speed drum obliteration and delirious guitar torture, as well as a miasma-like immersion of dismal melody and neck-wrecking snare rhythms.

The band astutely bring the title track to the fore after the violence of the opening trio of songs, introducing it with low moaning sounds that are morbid and macabre, and while the band do inject this murderous slog with flaring fretwork pulsations (and of course that blood-red vocal lividity), they eventually really push it into a war zone of madness, unleashing flurries of spidery riffing and eye-popping drum fusillades, along with another big dose of pile-driving grooves and anguished melody.

To close this riotous EP the band deliver “Terror Formed“, a thoroughly brutalizing experience that’s melodically pitch-black and again combines pavement-splitting rhythmic power and crazed tremolo riffing, frightening vocal madness and a mewling and mutilating solo that ultimately spirals off into the clouds.

We’ll share the comment that Third Chamber provided us to accompany this premiere and review: “We want to thank NoCleanSinging for streaming our debut EP Harvesting Our Decay. We hope the music resonates with whoever hears it and that they are personally inspired by the lyrical content in order to share its message to help evoke empathy and advocate free thought in our society.”

The EP was produced and mixed by Garrett McElroy, and it was mastered by Deigo Fernande, with album lyrics and artwork crafted by Shane Hawco. It will be released on CD and cassette, and as a digital download. You can pre-order those formats, and related merch, via the first link below. And you can catch Third Chamber on stage in November and December — check the schedule below:

2 Responses to “AN NCS EP PREMIERE (AND A REVIEW): THIRD CHAMBER — “HARVESTING OUR DECAY””