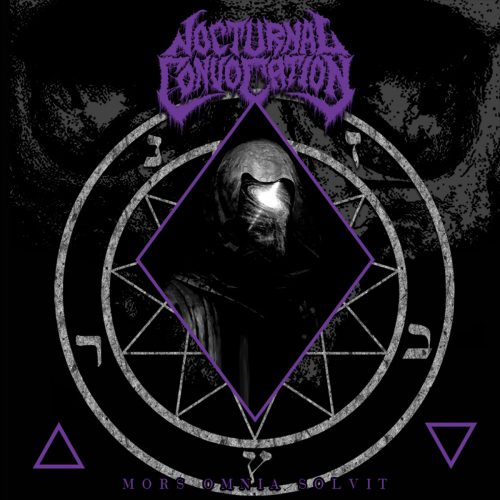 Following on the heels of a debut EP (Ritual I) released this past May, the Italian musical monstrosity that is Nocturnal Convocation is crawling forth from whatever lightless catacombs it calls home to deliver a debut album on the winter solstice. Entitled Mors Omnia Solvit (which could be interpreted as “death puts an end to all things”), the album will be released by the Irish label Cursed Monk Records.

It has become commonplace to claim that certain extreme metal bands “show no mercy” in channeling their inspirations into sound, but in the case of this band, truer words could not be spoken.”Mercy” simply must not be included in their vocabulary. Their brand of necrotizing doom is so pulverizing, so diseased, so relentlessly dedicated to creating an atmosphere of soul-consuming oppression and nightmarish horror, that it offers no reprieve. It makes perfect sense that the album will be released at the point on the calendar when night will be at its longest.

Mors Omnia Solvit consists of six tracks, each of which is identified as a numbered “Capitulum”, or chapter. The use of that word to mark the songs is in keeping with the solemn and ritualistic aspects of the music; the album seems to honor Death — hell, it seems to embrace it — and to be both sacred and profane at the same time. (These are simply one writer’s reflections of how the music sounds — the lyrics have not been disclosed, nor have the identities of the band’s members).

The first song chosen for public dissemination was “Capitulum II“. It proved to be a massive (and massively dispiriting) experience, accented by gothic cathedral organs and ear-shredding vocal insanity, and becoming a brutal demolition job before ending. You’ll find a stream of that track below, and it might be a good idea to listen to it before listening to the other track below, which is our premiere stream of “Capitulum IV“. But definitely check out that previously released track at some point — it makes a powerful impression.

But so does “Capitulum IV“. Ominous piano chords and a backing shroud of gloomy ambient sound pave the way for titanic pounding drums and a growling riff processed with mind-mutilating levels of distortion. Scorching shrieks and abyssal roars signal the elevation of the riff into a sickening manifestation of degradation and disease, while the drumming remains a brutish, skull-splitting presence. That calamitous experience abates, shifting the music into a vaporous midnight sensation of distant keyboard tones and preternatural shrieks,

When the rest of the band return after that creepy interlude, the pace is even more plodding than before, the toxic reverberations of the strings even more oppressive. Eerie glimmering tones drift across the top of those mangling low frequencies like psychoactive vapors, or the emanations of ephemeral wraiths, and those sensations persists even when the rhythm section deliver one final bout of methodical clobbering to close this horrifying liturgy.

Cursed Monk will release Mors Omnia Solvit on CD and digitally. It’s available for pre-order now, in advance of the December 21 release date.