Way back on Saturday morning, at the end of a roundup of new music, I mentioned the risk that there would be no SHADES OF BLACK column the next day, due to the likelihood that I would get hammered at a holiday party Saturday night, rendering my Sunday mind a wasteland. I know myself all too well. But now that my head is clearer (always a relative condition) I picked up what I had hoped to do on Sunday, added a couple of songs I’ve discovered since then, and have assembled this collection, which I hope you will enjoy.

We have enthusiastically covered everything released by this Dutch black metal band from Gelderland, beginning with their 2014 debut album Dromers. We won’t stop now. Their newest release will be a third album entitled Bloem, set for release on February 28th by Eisenwald.

I can imagine the looks of skepticism on some of your grymm visages after having seen those pretty flowers on the album cover, unmarred by words, but don’t turn up your noses until you’ve listened to the first track released from the album (and I’m betting you won’t do that afterward either). 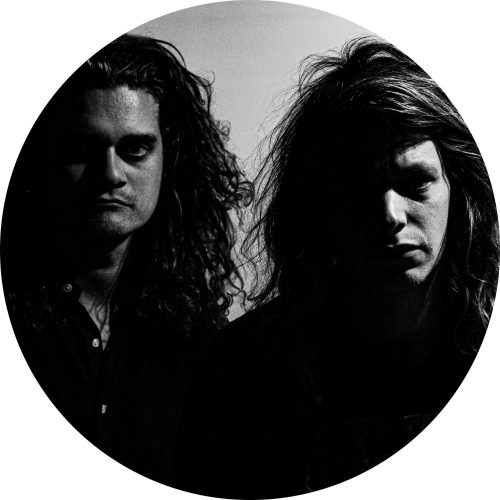 I found the following explanation for the album’s title and the cover photography: “Thematically, Bloem conjures old and reimagined folktales and legends in which flowers act as both symbols for birth and regeneration as well as crippling decay. The flower can be imagined as both an object of beauty in itself as well as a single glistening star in a whole night-sky of blossoming spring. The romantic naturalism on display within these five songs attest to a band wholly enamored with the forests and fields of the Gueldrian Veluwe; fully committed to capturing its seasonal shift like the romantic Oosterbeek painters before them”.

That first advance track, “Vlek“, is likely to be only one aspect of the Bloem experience, based on other things I’ve read about the album, though it manifests the pummeling drums, washes of gloriously ringing melody, and savage growls we’ve come to know from portions of previous releases. A few breaks in the blazing effervescence of the music allow seductive bass lines to step forward, and there’s an even sharper break that features acoustic folk strumming, whose melody carries forward as the song becomes increasingly mesmerizing. Fiddles join in, increasing the sense that we’ve been transported into the midst of a romantic rural dance under a full moon, and perhaps back in time as well. 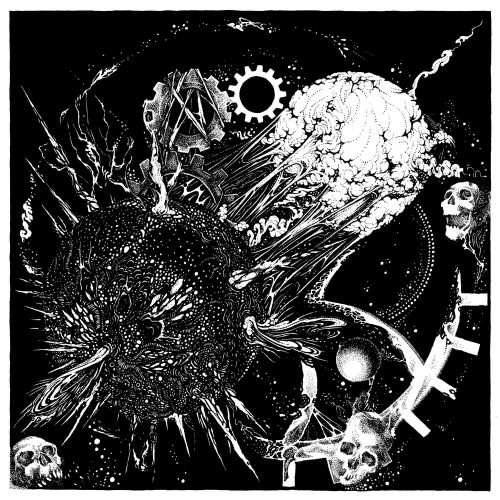 The German black metal band Membaris have existed for 20 years, with four albums to their credit, though seven-and-a-half years have elapsed since the last of those (Entartet). At last, a fifth one has been completed. Misanthrosophie will be released by W.T.C. Productions on February 7th, and I’m quite taken with the first advance track, “Architektur fern Struktur“.

Like the close of that Fluisteraars song, the music of this one also reminds me of a dance — but in this case it’s a wild dervish-like whirl. The fleet and fiery riffing is extravagant and ebullient, spinning and swirling, propelled by rapidly clattering drums. The shrieking vocals are equally wild, but frighteningly so. But halfway through, the song undergoes a dramatic transformation, with solemn vocals creating a sense of reverence — backed by a shroud of guitar sound that’s menacing in its mood. The band spin the music up again, but also introduce glistening, exotic guitar leads that create a sense of seductive mystery in the midst of all the savage, unchained ecstasy.

(I’m thankful to Miloš for linking me to this track.) 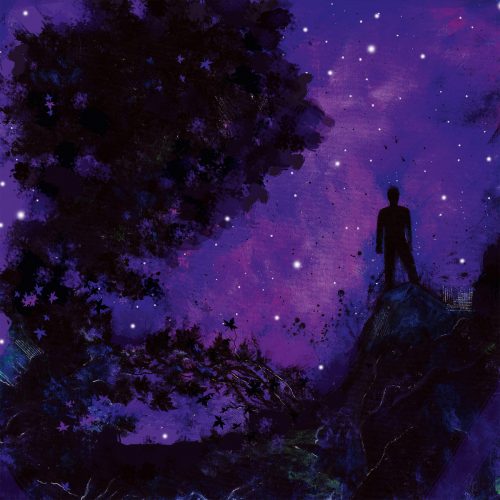 In April of last year Avantgarde Music released the second album by the atmospheric post-black-metal band Unreqvited from Ottawa, Ontario, Canada (the solo project of a creator who identifies himself as 鬼, which is a Chinese character that means “ghost”.). The album’s name was Stars Wept to the Sea, and it was my introduction to this project’s fascinating music. I made brief mention of that album in another one of these columns (too brief!) but neglected to write anything about the album that followed it later that same year, Mosaic I: l’amour et l’ardeur. I feel guilty about that, but those feelings were assuaged by seeing the praise showered upon it by more than a dozen other well-regarded metal blogs.

Unreqvited is nothing if not prolific, and so another album is now on the horizon, along with a forthcoming split release with Norway’s Sylvaine. Both of those will be released in January by Prophecy Productions. The new album, Mosaic II: la déteste et la détresse, is, as its name suggests, a companion to Mosaic I. 鬼 explains: “To briefly summarize this record, it was written in tandem with 2018’s Mosaic I as somewhat of a therapy experiment for myself. All of the joy, euphoria, love, etc. I felt over the course of the year went into Mosaic I (my lightest, happiest sounding record to date) and all of the ire, despondency, anxiety I felt over the course of this same time period went into Mosaic II, making it my darkest, most experimental release to date.”

“Nightfall” is the opening track on Mosaic II and the first song publicly revealed from the album. It displays Unreqvited‘s well-proven ability to create visions of beauty, which here do seem mysterious and celestial (you can see the Milky Way glistening overhead in your mind, simply by listening). Yet as spectacular as those sparkling and shining melodies are, the song has a potent physical thrust — and an increasingly despairing mood, thanks in part to the shattering extremity of the vocals.

By the mid-point the song drives the listener’s head with a rocking drum cadence, and the lead guitar takes off in a manifestation of flickering incandesence — a burst of heart-pumping energy before the music changes again, and again, eventually accented by piano and by heavy, mesmerizing  chords, and ending softly in a mood of dark introspection. From beginning to end, through all of its changes, it’s a spellbinding experience. 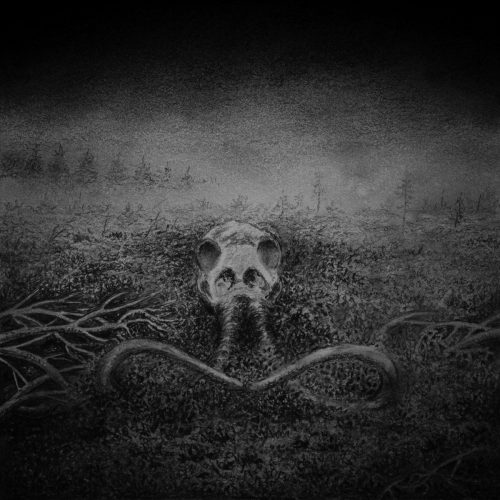 Crushing Black Death is both the name of the debut album by the Finnish quintet Apocryfal and also a fair approximation of their music. The album was released just a couple of days ago, and I haven’t even finished listening to all of it, so what follows here won’t even be a truncated review of the album. What I’m doing instead, based on a fear that I won’t have time during year-end mayhem to return with a complete review, is to focus on only a single track.

I was drawn specifically to this song when I saw that the lyrics consist of a passage from Melville’s Moby Dick, which happens to be one of my all-time favorite novels. The particular passage used in the lyrics is Ahab’s response to an impassioned argument by Starbuck, the young chief mate of the Pequod, that Ahab should abandon his quest for vengeance against the white whale.

In part, Starbuck exclaims: “Vengeance on a dumb brute!” cried Starbuck, “that simply smote thee from blindest instinct! Madness! To be enraged with a dumb thing, Captain Ahab, seems blasphemous.” And Ahab responds in a striking speech that both confirms his madness and also expresses a philosophy that deeply resonates:

“All visible objects, man, are but as pasteboard masks. But in each event – in the living act, the undoubted deed – there, some unknown but still reasoning thing puts forth the mouldings of its features from behind the unreasoning mask. If man will strike, strike through the mask! How can the prisoner reach outside except by thrusting through the wall?

“To me, the white whale is that wall, shoved near to me. Sometimes I think there’s naught beyond. But ’tis enough. He tasks me; he heaps me; I see in him outrageous strength, with an inscrutable malice sinewing it. That inscrutable thing is chiefly what I hate; and be the white whale agent, or be the white whale principal, I will wreak that hate upon him. Talk not to me of blasphemy, man; I’d strike the sun if it insulted me.

“For could the sun do that, then could I do the other; since there is ever a sort of fair play herein, jealousy presiding over all creations. But not my master, man, is even that fair play. Who’s over me? Truth hath no confines.”

And those words, or at least most of them, you’ll hear in Apocryfal’s song “Truth Hath No Confines“, whose music makes a good match for the frightening power of the words. The song is absolutely massive and crushing in its sound, a staggering doom monster at first, oozing hopelessness — but it periodically also becomes a near-overpowering storm of obliterating drums and cruel, maniacal riffing that hits like a blizzard. Those lyrics are voiced by a mix of abyssal gutturals and strangled shrieks that are blood-freezing.

The combined impact is both electrifying and nightmarish, channeling oppressive dread, tyrannical vehemence, unchained violence, terrifying majesty, and a feeling of unavoidable calamity (we know very well what happens to the Pequod).

I’ll add that although I haven’t completely finished the album, everything else I’ve heard makes the record one that I think will be well worth consuming in its entirety.

(Thank you Miloš for the link to Crushing Black Death.) 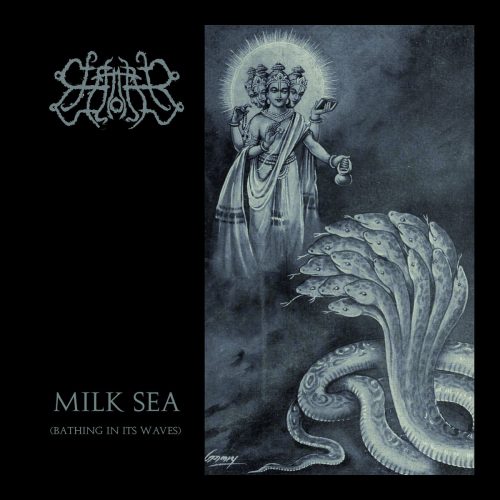 “Milk Sea (Bathing in its Waves)” is the debut release of a one-person black metal project from somewhere in Canada named Witherer. Its sole creator, Tiamoath (accompanied here by session drummer Cam O’Neill), describes the song as follows:

“’Milk Sea (Bathing in its Waves)‘ is a two-part paean to Ananta-Shesha, a song whose illusorily meditative, ritualistic first half descends into chaos and fury in its second, slowly dissolving any sense of structure before recapturing the purgating flame and sweeping towards a gravity pool of cosmic decay and rebirth. The song’s praise of the Serpent is also a celebration of the indifference of the Universal to the human, the immanent presence of emptiness at the center of the person, and an immersion in the realm of Divine Love; a statement that there is naught but the eternally repeating, ecstatic movement of the snake through the primordial Sea.”

I was drawn irresistibly into the song from its opening moments by the piercing dissonance of the guitar, the mercurial vibrancy of the bass, and the shifting drum patterns. The music (which is accompanied by bestial vocals that betray a fracturing mental state) creates a queasy and hallucinatory feeling, like the capturing of a demented dream in sound. The soft and measured transition into the song’s second half is equally dreamlike, but chillingly haunting in this case; the vocals are different, but the distorted spoken words make that transition even scarier.

As the song begins to pick up again, things get very disorienting and disturbing once more. The feeling of being caught in someone else’s hallucination persists, but the experience is so transfixing that you can’t escape. The vocals become a cacophony of different expressions, all of them dismaying, while the amalgam of freakish arpeggios and frequently changing drum-and-bass permutations keep the listener off-balance. As forecast in Tiamoath‘s description, the song’s second half includes feverish frenzies, as well as a kind of ritualistic pounding at the end.

The song is intricate, even “avant-garde” and experimental in its progressions, and much more dissonant and discordant than harmonious, but to repeat — it’s a transfixing experience and leaves me eager to discover how Witherer will follow this first release.