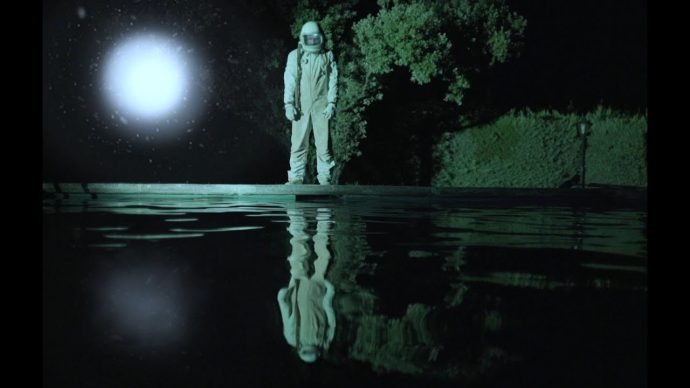 You can tell from the title of this post that I have ambitions for putting a lot of black/blackened metal in front of you today. As I explained in yesterday’s post, the torrent of new music hasn’t let up just because we’re on the brink of the holiday season and the turnover from 2019 to 2020. So I’m trying to make the most of this weekend for round-ups of new music before the new week makes me focus again on LISTMANIA and premieres.

Did you miss Deemtee’s debut album when it was released last June? If you did, and you’re also a fan of such bands as Deathspell Omega, Oranssi Pazuzu, Valborg, Blut Aus Nord, and Ved Buens Ende, it’s well worth carving out some of your year-end time to check it out. We premiered a full stream of Flawed Synchronization With Reality, and I’ll excerpt only these words from the very wordy review which accompanied that: 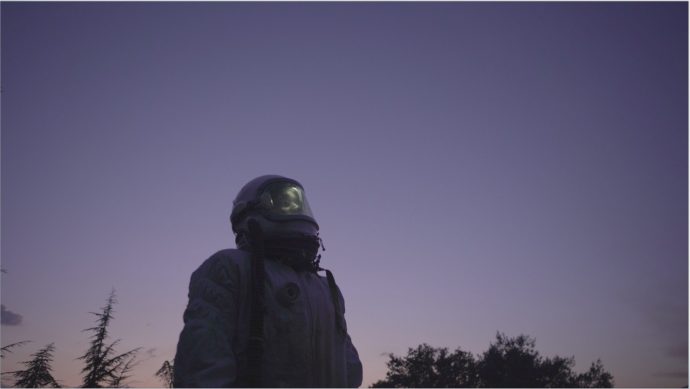 “Neither the album as a whole nor any single song is a predictable, linear progression. The music is often vastly intricate, and also unexpectedly mesmerizing. At times it’s utterly brazen and boisterous, and at other times seductive or violently disorienting. Some tracks become concertos of madness and psychedelic hallucination, others divert into voyages across cosmic oceans or plummet into wells of inner despair. Nothing is at it seems at first, and there is no chart laid out to tell you where you’re going next.”

Apart from reminding the adventurous among you that this album is one you shouldn’t miss, I’m writing again about Deemtee because of a transfixing new video that was released not long ago. The song featured in the video, “Badtrip Culmination“, is pretty much what the title says — a storm of relentless blasting drums and an enveloping miasma of grim, dissonant, swarming riffery, together with a cacophonous cavalcade of cruel and crazed vocal delirium. It’s so destabilizing that it risks throwing your inner ear out of whack -— until the pandemonium subsides, without warning, into an eerie astral drift in which ghosts seem to wail and weep.

It might actually be one of the more “straightforward” tracks on the album, though that is definitely a relative term with Deemtee. But there’s nothing straightforward about the video. It’s very difficult to understand the events being portrayed in it. You can’t tell whether it is someone’s psychotic hallucination we’re witnessing, or a fracturing of the laws of physics and the directional nature of time, or some kind of assault on our world by aliens possessed of unimaginable power. Whatever is happening, the video is fascinating, and disturbing, and beautifully made (by a director who uses the name Torax). 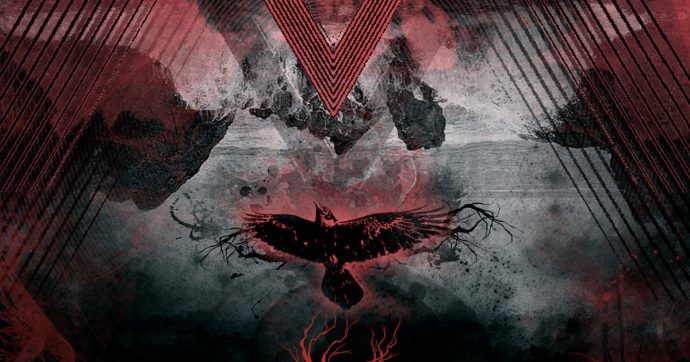 The early part of 2020 is already looking stacked with eagerly awaited new albums, one of which is Spectres Of The Old World, the eighth album by Germany’s Dark Fortress. The line-up from the last three albums seems intact, other than the addition of a new keyboardist (Phenex). Conceptually, as Morean explains, the new album picks up from the final song on the last album:

“Together with the rest of the human race, the protagonist reincarnated as a disembodied creature of pure light in ‘On Fever’s Wings’, the last song of Venereal Dawn. The new album attempts to draw a picture of such a mind’s perspective on life – reincarnating as pure, massless energy. The narrator has become the fabric of the universe itself. This is where heavy physics and string theory come in.”

Heavy physics and string theory! Traditional black metal subject matter, of course. 🙂 And here’s what Morean had to say about the first advance track from the album, “Pulling At Threads“, which you’ll be able to experience below:

“As mankind’s destructive tendencies start turning on itself, the subdued world around it breathes a sigh of relief. Humans erect monument after monument to their own greatness, but fail to see the erosion caused by their own greed, jealousy and small-mindedness. Nature leans back and watches as the human empires start crumbling from within. Thus, as one tiny thread that keeps civilisation together after another breaks and disintegrates, the
problem starts solving itself.” 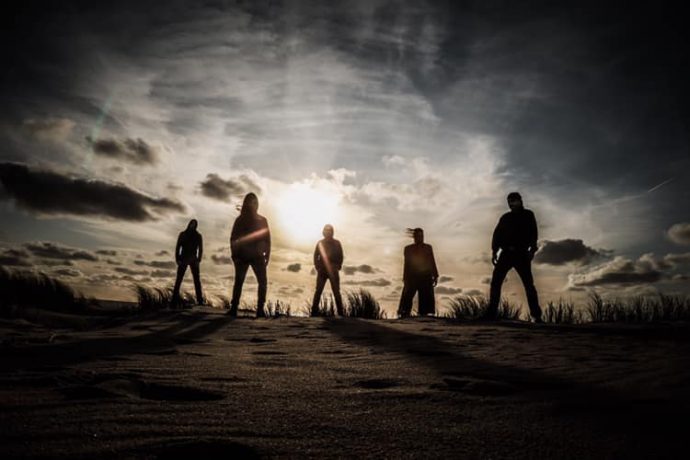 This all sounds very interesting, but what of the music? Of course we know very well by now that Dark Fortress have evolved significantly since their early days, ambitiously moving in decidedly more unorthodox, more progressive, and often more challenging directions as the years have passed, though without completely jettisoning the violent savagery that still very much makes them a black metal band at their core.

Speaking of which, “Pulling At Threads” is a conflagration of supercharged drumming and wild, blazing riffage that swirls, soars, and sears. Morean‘s vicious vocals are equally on fire, though he quickly moves into extravagant song, lest we forget the course changes in the band’s music that occurred after he joined them. At the minute-and-a-half mark the band switch gears to deliver a thumping beat and a rapidly jabbing riff which together throw a piece of red meat to headbangers, and later on they introduce a guitar arpeggio that gives the music a more esoteric feeling.

Having said all that, the song is a very short one for Dark Fortress, ending abruptly and without offering much in the way of unorthodox, progressive, or challenging permutations (to refer back to my introduction). Still, it’s a welcome piece of music, and probably a good choice as an opening crowd-pleaser. We’ll have to see what else the album holds in store, and whether it holds its own with such albums as Ylem and Venereal Dawn.

Spectres Of The Old World will be released on February 28th by Century Media. 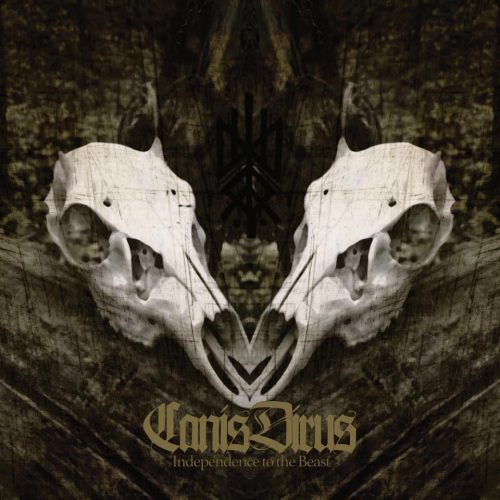 Canis Dirus is the Latin name for the prehistoric dire wolf, and also the name of a black metal duo from Minnesota. They have two albums to their credit, both of them released by Moribund Records, as well as a self-released 2019 EP, though we somehow failed to feature any of those at our putrid site. I’m now paying closer attention because their next release is coming out on Bindrune Recordings (because I always pay attention to what that label is doing).

That next release is Independence to the Beast, and it’s coming out on January 31st. The next song I’ve picked for this collection is an advance track that premiered just yesterday named “The Child and the Serpent“. Of that song Bindrune has written: “The debut single from Independence to the Beast is the perfect depiction of what’s to come by embracing all of the sonic elements to be witnessed on this fourth coming album. Fear. Misery. Struggle.”

The sonic elements presented through “The Child and the Serpent”, which is nearly 12 minutes long, are multifarious. They include slow, mysterious guitar reverberations and eerie sonic shimmers; crushing, doom-saturated chords that channel bitter hopelessness; potent drum rhythms made for the slow headbang; and a mix of wretched shrieks and grim spoken words. The impact of all those ingredients is earth-shaking and soul-savaging.

But there’s more to come… including a haunting interlude of moody acoustic guitar and gossamer-light ambient backing, which eventually becomes both much heavier and more mystical and chilling in its atmosphere. The music also becomes more hallucinatory and more desperate in its feeling, thanks to a weirdly warbling guitar melody, before the band return to the juxtaposition of slow, craggy devastation in the low end and spectral wailing high above — and a final reprise of the opening, which pulls the heart even further down into gloom and loneliness.

It doesn’t appear that pre-orders are available yet, but watch these spaces to find out when that happens: 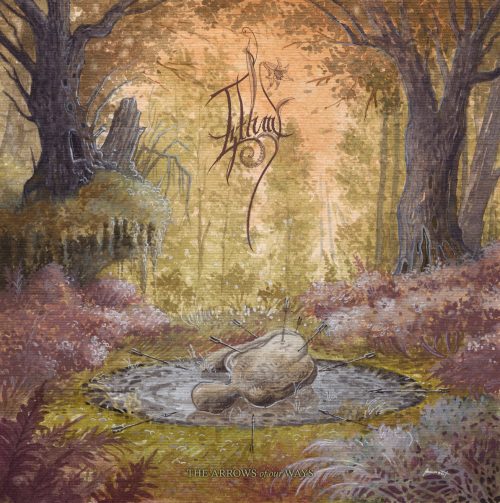 Izthmi are a black metal quintet from Seattle. Because I live in the Seattle area and make it a point to stay on top of metal shows in the area so as to keep this calendar up-to-date, I know they gig frequently in the region. On the other hand, I don’t go out to shows as often as I used to (I’m really fuckin’ old, and finally starting to feel it) and I haven’t yet seen them on stage. As a result of that, and because I failed to check out the two demo tracks they have had up on their Bandcamp page, I didn’t have any impressions about their music before listening to the song below, which I’ve chosen as a way of concluding Part 1 of today’s column.

That song, “The Arrows of Our Ways“, is the title track to Izthmi’s debut album, which has been set for release on February 14th by Within the Mind Records. The press release we received describes the record as “a concept album focused on the journey of the self and finding solace through love in a time of extreme oppression and ecological detriment.” The song was released through a lyric video. 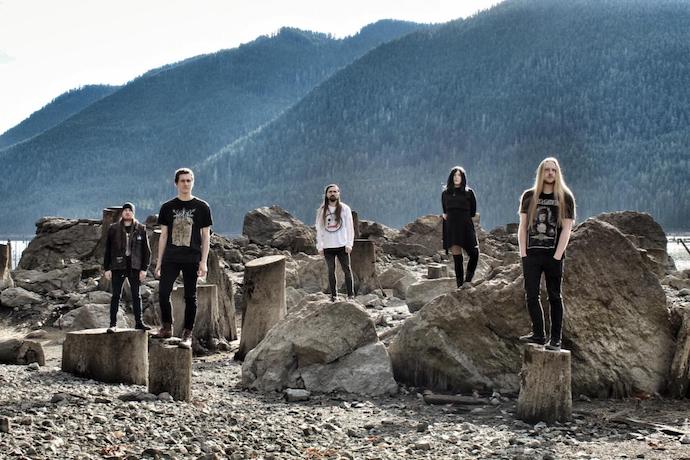 As displayed here, Izthmi‘s music evinces blazing emotional power, thanks to jet-fueled blasting, throat-ripping vocals, and multi-faceted riffing that intensely channels grief and despair.  As the song unfolds, the band reveal mesmerizing progressive guitar permutations, changes in pace and in vocals (deep roars occasionally take the place of the cauterizing shrieks), and changes in mood into even more depressive realms.

However, even though the overarching atmosphere of the melodies is night-dark throughout, the rippling guitar leads climb to spectacular heights that are absolutely scintillating — as well as descending into depths of yowling and growling bleakness. It makes for continually changing trip — and it’s a persistently gripping trip as well, one that never abandons its soul-stirring emotional reach despite the head-swirling instrumental interplay. I’ve listened to the song many times, and every time it has left me wide-eyed.

The Arrows of Our Ways was engineered by Matt Roach and Jesse Dean at Rain City Recorders in Vancouver, and was also mixed by Matt Roach and mastered by Brad Boatright at Audiosiege in Portland. The cover art was created by Vojtěch “Moonroot” Doubek.