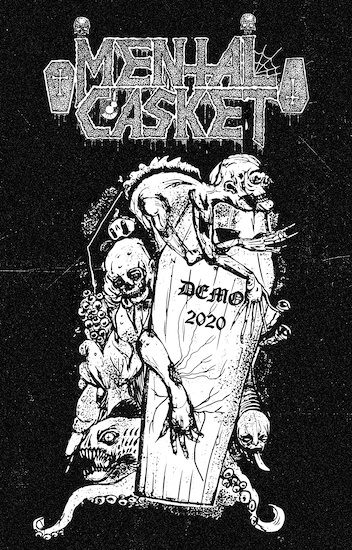 Mental Casket first crawled forth from some stinking grave in Warsaw, Poland, in 2018, inspired by the early works of Chuck Schuldiner and other fore-runners of Floridian death metal, with an affinity for the likes of Autopsy and Pestilence as well, plus newer bands like Gruesome. Last year they released their debut demo, and today their second one is making its grotesque appearance. We’re fiendishly happy to help spread the word through this premiere of its three tracks.

Mental Casket proudly wear their influences on their ragged and rotting sleeves, but while their chosen formulations of death metal may be quite familiar, they’re so good at composing and executing their sonic monstrosities that it’s still a thrill to hear what they do. Sometimes you don’t need to break any molds in order to put a charge into a listener’s brain stem, and Mental Casket definitely do that. 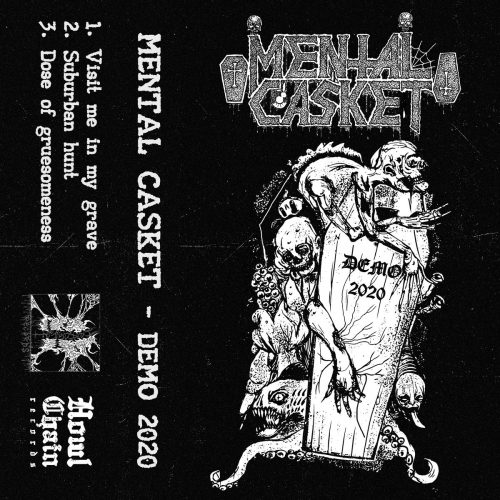 The opener, “Visit Me In My Grave“, immediately greets the ears with a twisted, darting guitar arpeggio, in harmony with queasy grumbling bass notes, and undergirded by drum rhythms that grow increasingly animated and accelerated as the riffing becomes a manifestation of seething and scissoring cruelty. The gruesome vocals enhance the feeling of horror, and mewling, squealing guitar leads lend the music a feeling of gibbering lunacy. Closer to the end, the band surge into a fire-breathing paroxysm capped by a shrieking solo and an extravagant howl.

The mood of ghastly horror persists in “Suburban Hunt”, which intermingles passages of lurching and stomping ghoulishness with bursts of insectile fretwork mania. As on the previous track, the drum and bass rhythms change frequently, driving the music into clattering gallops and augmenting the moments of pile-driving brutishness

Additional mutilating riffs await in the closer, “Dose of Gruesomeness” (the best song of the three), with the guitar-work providing a vivid semblance of berserker feeding frenzies, like swarms of superheated maggots in action, and the guitar solo in this one is a swirling, screaming piece of sonic derangement, while the melodies include moments of crazed misery and morbid gloom. Lurching and jabbing rhythms inhabit some of the riffing in a way that will get your head moving vigorously, while the macabre vocals continue to send shivers across the skin. It’s a thriller of a finish to a thrilling EP.

This new demo was recorded and engineered by Mental Casket in their rehearsal room, and it was mixed and mastered by Kacper Pawluk and Mental Casket’s Lipek (who also plays in Government Flu, Jad, and Gash Faith). It features cover art by Radoslaw Pierscinski (of The Dead Goats).

The demo is available now as a digital download at Bandcamp, and it will be released on tape in February by Headsplit Records in the U.S. and by Howl Chain Records in Poland and the rest of Europe.