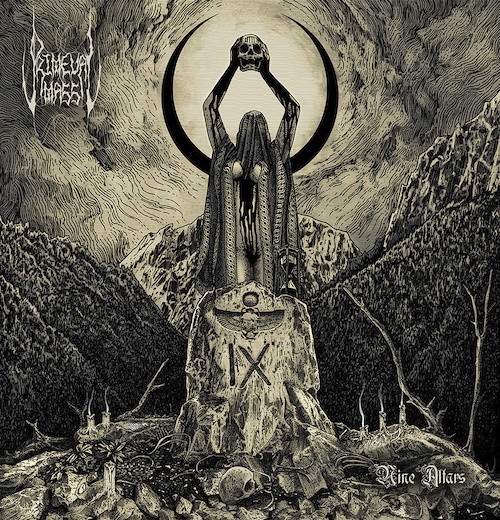 I’ve been following the activities of the Greek solo project Primeval Mass since having my eyes opened wide by Karmazid‘s cover art for the band’s third album, To Empyrean Thrones, in 2016. After hearing only one song I described the music there as “a treasure chest of riffs, one jewel after another”: ” When the music accelerates into a white-hot fury, it’s a mainline injection of pure adrenaline, but its’s just as gripping when it courses like shimmering streamers of lights. The inflamed vocals — a combination of demonic barking and head-back howls — are a perfect match to the molten, cyclonic surging of the music.”

In a subsequent review accompanying our premiere of a full stream of that album I summed up its atmosphere as “one of chaos made manifest in sound”, yet observed that “within these thrashing maelstroms lurk tantalizing melodies, booming grooves, white-hot solos, and well-timed changes of pace”, as well as surprising diversions and digressions that made the album fascinating and also highly infectious.

Now, Primeval Mass is returning with a fourth album, Nine Altars (with equally stunning cover art by Martin from LGN Art), that’s set for release on February 21st by Katoptron IX Records, and today we get the chance to share a track from it, fittingly named “Burning Sorcery“. 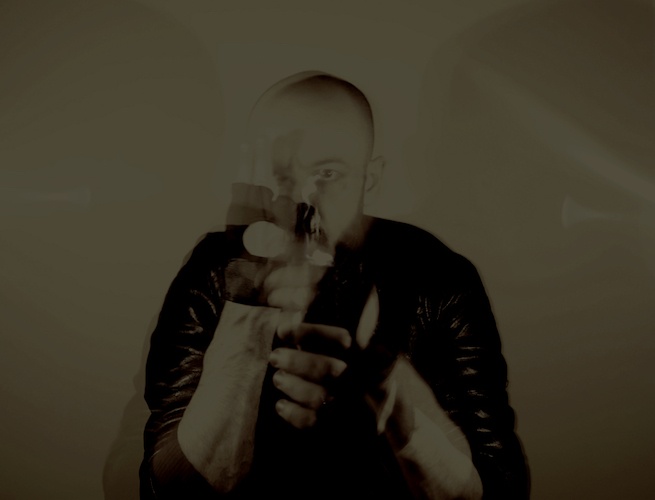 Coming four years down the road of time from the last record, Nine Altars is obviously not a hastily thrown-together piece of work. Unlike many solo artists, the mastermind behind Primeval Mass (Orth) doesn’t rush, and seems to labor meticulously before pronouncing a song complete. This is perhaps more understandable in light of the ways in which Orth‘s songwriting has evolved, and the diverse traditions of music that he incorporates — ranging from the first and second waves of black metal to European and American thrash from the ’80s, classic heavy music in the vein of NWOBHM and power metal, and progressive rock.

There’s a lot to explore and consider within Nine Altars, given how much creativity and genuine spirit is encompassed by its eight tracks, but today we’ll just focus on “Burning Sorcery“.

Orth has written that he views the new album as “the most intense, energetic and emotionally charged” of them all, and those reflections are born out — in spades — by this new song. It rocks tremendously hard, and its powerful, gut-punching and neck-slugging rhythms are embellished by electrifying riffs and fiery flashes of mystical, dissonant melody. But the song also hurtles at full-throttle speed, pushing the adrenaline even higher with thunderous drumming, furious fretwork, and even wilder and more mercurial leads, which leap and dart with abandon.

Orth‘s vocals are as inflamed and possessed as everything else, but the song is mainly a breathtaking display of instrumental pyrotechnics. The drum rhythms change frequently, and erupt in extravagant bouts of eye-popping athleticism. The fretwork has a crazed, exultant feeling, and is itself a mind-melting display of virtuosity. The soloing in the song is just as technically impressive as everything else and becomes a constantly morphing extravaganza, almost reptilian at first but igniting into jaw-dropping firebursts of swirling, soaring, shrieking sound.

The song does sound like the work of a man possessed, and the feeling is contagious. Listening to it is like being caught up in a spinning whirlwind of fire, which spins faster and faster, veering and leaping in ever-more ecstatic and mystifying directions. For all its disorienting and even bewildering qualities — and in part because of those very qualities — it’s a glorious, blood-rushing experience, and a highly addictive one

Orth gives credit to these allies for their work on the new album:

“George Christoforidis for the devotion on his producing, mixing, mastering duties and for nailing it with his drum performance

“My Witchcrawl mates Tasos Molyviatis for his Heavy Metal screams on “Firecrowned” and Yiannis K. for providing the appropriate, intense feeling with his acoustic guitar lead on “The Hourglass Still”

As a further sign of what the album holds in store, we’ve included streams of two previously released tracks from Nine Altars — “Circle of Skulls” and “The Irkallian Born” — along with today’s premiere. For further information about the release and how to get it as that info becomes available, keep an eye on these locations: