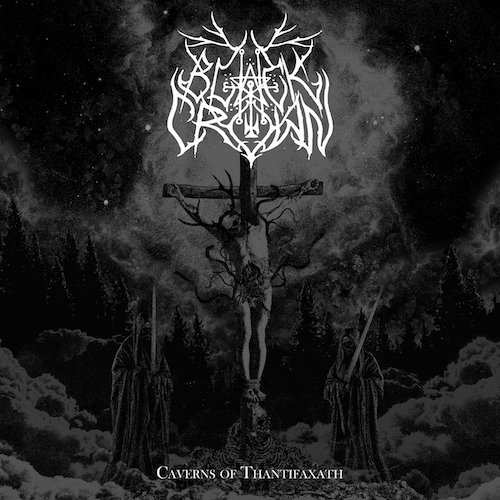 When the passing of Necrophagia vocalist Killjoy effectively brought an end to that storied death metal band, Necrophagia bassist The Mountain VVitch eventually turned his unquenched musical impulses toward a new project named Black Crown. A demo named The Rise of Astaroth appeared without fanfare, but was noticed, and now Black Crown will release a debut album through the combined forces of Satanath Records (Russia), More Hate Productions (Russia), and The End Of Time Records (Ireland) on March 14. Entitled Caverns Of Thantifaxath, it includes nine demonic invocations, one of which we’re premiering today through a lyric video.

Black Crown self-proclaim their music “Black Ritual Metal”, and this new song, “Lahamu: The Awakening” does indeed sound like what the lyrics manifest — the invocation of a fearsome warrior demon. No solemn supplication this, but rather a conjuration made of fire and fury, of cold poison and ominous sorcery. 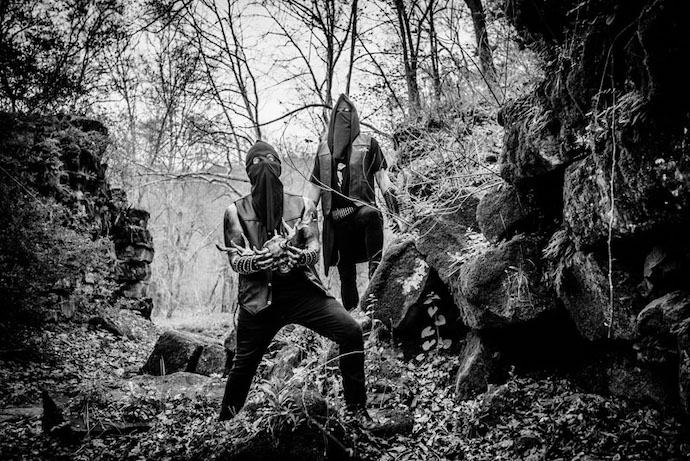 The song cycles between two different dimensions of sound, one electrifying and one oppressive (yet esoteric). When the drums hammer like driving pistons, the riffing is a mix of low-end roiling menace and crazed flickering fretwork. When the drums become slow and steady, the chords groan and drag, but those gloomy, ominous tones are paired with chiming notes that sound despairing and unearthly. At the song’s most extravagant zenith, a flashing and fervent solo channels ecstatic delirium. Meanwhile, the shrieking vocals, paired with malignant roars, amplify the song’s cruel and viciously euphoric energies.

On this album The Mountain VVitch performs guitars, woodwinds, and vocals, and is joined in his malicious ministrations by bassist Heretic.

Satanath Records recommends the album for fans of Necrophagia, Beherit, Burzum, Archgoat, and Nunslaughter. Satanath’s co-release with More Hate Productions and The End Of Time Records will provide the album on jewel-case CD with a 12-page booklet. Below you’ll find our video premiere as well as the previously released track (which is a free download at Bandcamp), “Whore of the Qliphoth“.

One Response to “AN NCS VIDEO PREMIERE: BLACK CROWN — “LAHAMU: THE AWAKENING””