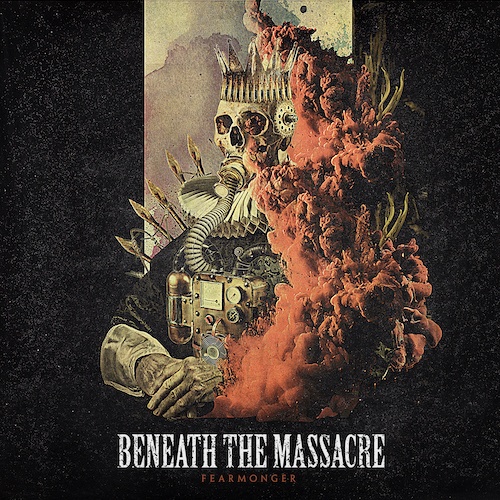 (Here we present Andy Synn‘s review of the long-awaited new album by Beneath the Massacre from Montreal, Quebec.)

Sometimes it’s hard to put into words exactly why certain bands “click” with you and others don’t.

And, before anyone chimes in with “but Andy, isn’t your whole job here putting things like that into words?” let me say… shut up, I’m not finished.

It’s particularly difficult at the more Brutal/Extreme/Technical end of the spectrum, where the “everything turned up to 11” approach of the bands means that the differences between them are, more often than not, more of a matter of gradient and nuance.

Can I tell you exactly why I find Wormed so ridiculously fun to listen to, while I find Brain Drill to be just ridiculous? Can I explain exactly why I can listen to Hideous Divinity over and over, but repeated exposure to Origin often just leaves me cold? Not easily, no.

But I can tell you just why I love Beneath the Massacre, and their new album, Fearmonger, so much. 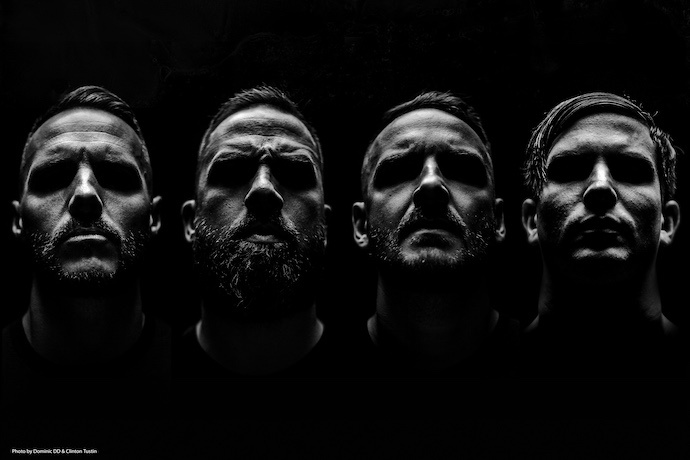 There’s always been both a savage simplicity and a calculated complexity to Beneath the Massacre’s music, which allows them to make both an instant impact while also rewarding repeat listeners with a chance to dig deeper into all the grinding gears and moving parts which help make up the band’s signature brand of barely controlled chaos.

Thankfully, after eight long years out of the spotlight, it doesn’t appear that the BtM crew (brothers Chris and Dennis Bradley joined as always by iron-lunged vocalist Elliot Desgagnés and, making his first appearance on record with the band, drummer Anthony Barone) have lost a step, meaning that Fearmonger is every much the bone-crushing, mind-melting assault you might expect it to be.

It’s also the band’s shortest album yet (although not by much). But, considering the frankly astonishing number of notes and beats per minutes packed into every one of these tracks (none of which extends beyond the three-and-a-half minute mark), this is perhaps a smart move. Less, as they say, is often more. And, in this case, there’s already a whole lot of “more” to digest.

Speaking of… something which makes Fearmonger even easier to get your teeth into, despite its near relentless intensity, is that the band don’t fully forego hooks in their pursuit of pure heaviness.

And while the building blocks of these tracks – all finger-mangling fretwork, pneumatic, jackhammer rhythms, and panic-inducing percussive patterns – remain consistent throughout the record’s entire run-time, the Canadian quartet still keep finding ways to subtly tweak their formula, whether it’s the lurching, irresistibly headbangable conclusion to “Of Gods and Machines”, the hypnosis-inducing lead melodies of “Autonomous Minds”, or the strobing, mutated staccato of “Bottom Feeders”.

As well as introducing (or reintroducing) them to a whole new generation of Tech-Death disciples, I’m also hopeful that, after such a long absence, this record will allow BtM to finally escape the association with Deathcore which has (for various reasons) dogged them since their early years.

After all, I can count the amount of actual breakdown-style riffs on this album on one finger – it’s right near the end of “Treacherous”, FYI, and, if we’re being honest, as breakdowns go it’s more Cannibal Corpse than Suicide Silence – whereas the twisted tremolo and skin-stripping shred of “Hidden in Plain Sight” and “Absurd Hero” are far more closely related to the savage technicality (with just a touch of razor-edged melody) of bands like Man Must Die and Archspire (who themselves owe a fairly significant sonic debt to the BtM crew).

Still, Fearmonger probably isn’t going to convince those who are vehemently opposed to this particular style of music to give Beneath the Massacre another chance, as it really does see the band picking up exactly where they left off eight years ago, doing exactly what they do best, as if not a single day had passed between then and now.

And while you might think this would make the album sound dated, that’s definitely not the case. In fact, if anything, it feels like – when it comes to sheer velocity and rampant technicality – the rest of the world is only just now beginning to catch up to what these guys are already capable of!

3 Responses to “BENEATH THE MASSACRE: “FEARMONGER””