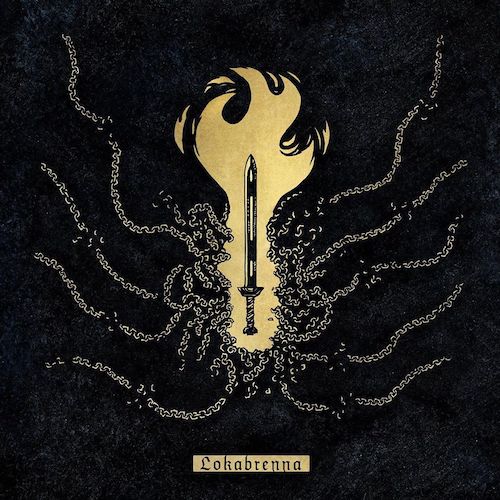 Today we premiere the entirety of Lokabrenna, the hour-long debut album by Nawaharjan, the Berlin-based black metal band whose name reportedly was built from the proto-Germanic word for “Nawaz” (corpse) and “Harjaz/Harjan” (army). The album will be released by Amor Fati Productions on the 20th of February. While we have (as usual) impressions of the music to share with you, in this case it’s worthwhile to first share what has been disclosed about the album’s conceptual underpinnings, because that gives further depth to the abundant array of sensations provided by the songs. To quote from the press materials:

“Lokabrenna is a conceptual work based around the Thursian Brandawegiz system, which is built upon the nine locks of Sinmara’s chest within the dark, liberating side of Germanic mythology. Each of the songs on the album symbolizes one of these locks and acts as a devotional hymn to Loki and a way to unlock his potential within oneself. 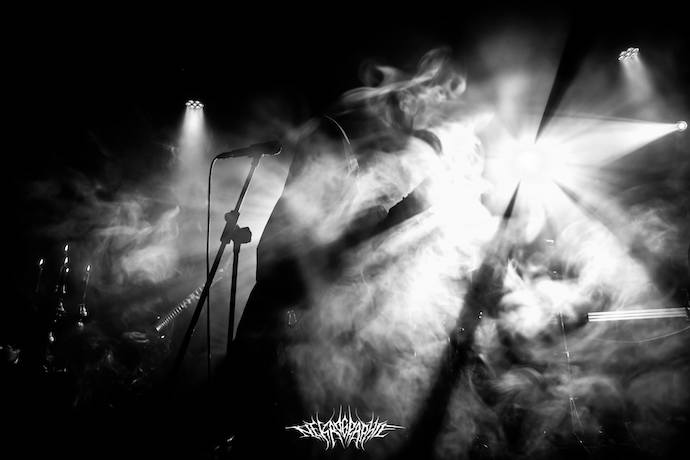 “The album’s namesake, Lokabrenna is the Scandinavian name for the star Sirius, which translates into ‘Loki’s burning.’ The star is associated with important destructive and liberating attributes in many cultures worldwide. It is known as the ‘Alpha Canis Majoris,’ or the ‘dog star,’ in the ancient world or as home planet of the Nommo spirits within the belief of the Dogon tribe.

“Within the Brandawegiz tradition, Lokabrenna is associated with the liberating powers of Loki. It is also linked to the destruction of the cosmos that follows after the release of the flaming sword Lævateinn during Ragnarök and Loki’s transformation into his final, liberating aspect Hveðrungr.”

Across the album’s nine songs a narrative journey unfolds, beginning with “Warassuz (Awareness)” and ending in “Hradjungo (Liberation)“. The moods of the music change as that journey progresses, but there are certain constants: The vocals are always shattering in their intensity. The riffing suffuses the senses, is often sweeping in its scale, and unerringly evokes powerful emotional responses. The very talented rhythm section dependably create dynamic turns in this long and winding path. And finally, in keeping with the mythic inspirations for the music, there is an “epic” quality to the music, even in its most despairing moments, with an overarching grandeur that befits the tale. 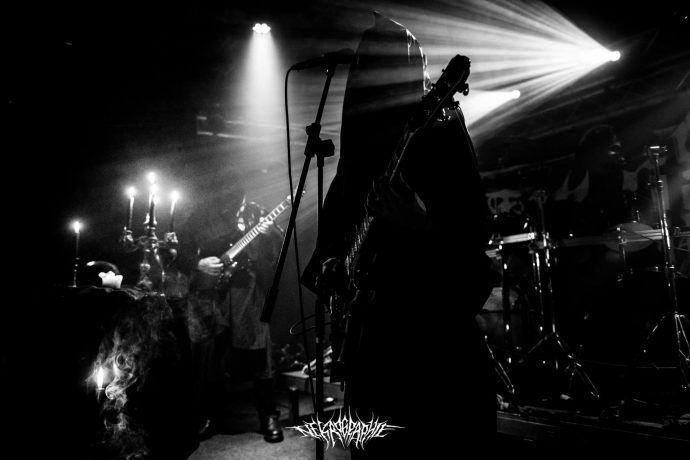 There is no prelude to the album, simply the sound in the opener “Warassuz (Awareness)” of an immediate conflagration, a brazen attack of full-throttle drumming, rapid-fire bass, swirling guitars, and torrid, flesh-stripping vocals. When the drums become more measured, the music’s atmosphere transforms from exultant to dismal and cruel.

The searing, swarming quality of the riffing persists in “Maino (Intention)“, as do the explosive vibrancy of the drumming and the throat-ripping fury of the vocals, but the emotional impact of the melody is more beleaguered and yearning. No less intense or penetrating than its precursor, and indeed panoramic in its sweep, the song also gleams with glorious light, as the whirring leads catch fire and soar.

Vivid emotional intensity is inded a hallmark of the album as a whole, and it proceeds unchecked through the outset of “Skuwwe (Reflection)“, in which the vocals seem to become a manifestation of shattering torment and the riffing seems to channel pain and desperation. But as before, the band create dynamic transformations, slowing the pace into a solemn march, shaded by the lament of dirge-like chords, and portraying visions of haunting majesty. The whirlpool riffing surrounds and fills the senses, blotting out everything but the feelings they so powerfully channel, and the leads cry out just as intensely, cresting in a soul-stirring extended guitar solo that might be the zenith of the entire album.

When you’ve created something as breathtaking as the finale of “Skuwwe (Reflection)“, what do you do next? Wisely, Nawaharjan detour into something eerie and unsettling in the opening minutes of “Utfursko (Exploration)“, a song that begins softly and swells in volume, led onward by a potent bass pulse, but also eventually enveloping the senses as the disturbing main riff cycles on. Yet, the song does eventually become a torrent of blazing drum-work and delirious guitar whirring. As elsewhere on the album, the feelings of the music seem to be different manifestations of striving and pain, of hopelessness and harrowing insanity. Martial snare patterns also provide the backdrop to music of heart-breaking sorrow as the vocals again seem to channel sheer agony.

From screams of utter despair, the vocals drop into vicious, feral growls in “Sunjo (Realization)“, backed by riffing that’s tragic but wholly befitting the epic scope of the grand mythic tale being told across the album. Gloom descends as the the energy abates, but there is no relent, even then, in the vocal’s crazed intensity. And when the drums begin to hurtle and hammer again, the music elevates into a glorious swirling and spinning sensation that swells the heart near to bursting.

As the title of “Thwerhanassuz (Opposition)” suggests, the music on this track reflects conflict, as militaristic snare patterns again surface in between passages of metronomic hammering, while the music generates an aura of grim determination and gripping fierceness. However, the melodies again create an air of tragedy, albeit tragedy on an epic scale. 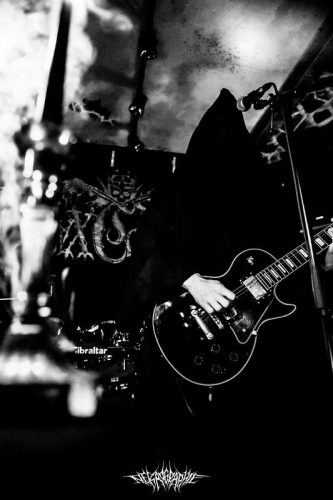 At almost 10 1/2 minutes in length, “Umbibrautiniz (Transformation)” is the album’s longest track. It picks up where “Thwerhanassuz (Opposition)” left off, with electrifying currents of melody and unchained vocals that together create a feeling of crushing despondency. The shrieking of crows become harbingers of death when the pace abates and grief-stricken chords reverberate in a way that seems even more hopeless and supplicating. But the song changes again, segueing into an alternating pattern of rocking back-beats, tumultuous war charges full of defiance and desire, thrusting, swaggering pulsations redolent of heated blood, and finally another episode of swirling, soaring glory.

There is indeed a sense of suffering in “Thrawo (Suffering)“, but not the tearful and solemn suffering of attendees at a graveside funeral. The music instead seems more like a cyclonic display of inner suffering, a sense of being torn by conflicting impulses, so torn that rational thought has been wrecked and replaced by the dominance of anger and anguish. Certainly, all reason seems to have fled the vocalist, so frighteningly intense are the sounds so violently expelled from that throat. The music seems to portray a calamity of severe and perhaps irremediable proportions.

Where all this has been leading is the album’s final track, “Hradjungo (Liberation)“, and not surprisingly the music becomes sweepingly panoramic again, the riffs shining with incandescent light as the song elevates into the clouds. The rhythm section introduce rocking movements of irrepressible vitality as well as blasting away in ferocious fusillades, and the melody becomes joyful, even though the extended solo that caps the song (and is reminiscent of a violin), while also glorious, has a soulful quality that still hints at memories of regret.

It makes for a stellar finish to a remarkable album that’s easy to get lost in. If there is any warning to be offered, it’s that, for all its changes, the passionate intensity of the album over the course of an hour is almost unrelenting. So, be prepared….

One final reminder — Lokabrenna comes out on February 20th, and you can place your order now.

3 Responses to “AN NCS ALBUM PREMIERE (AND A REVIEW): NAWAHARJAN — “LOKABRENNA””