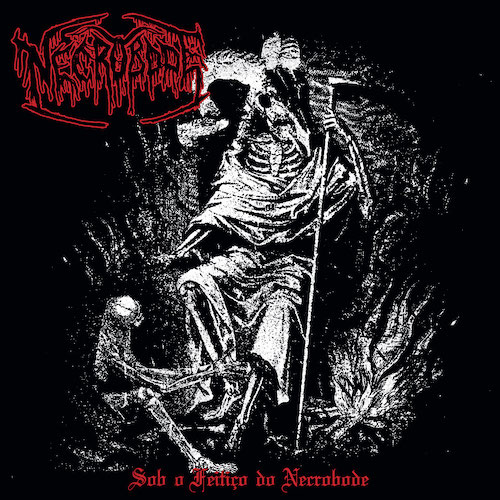 The music of Necrobode is as infernally bestial, as merciless, and as death-crowned as all their outward trappings would suggest, from the cadaverous horned lord on the cover of their new album to their own savage, inverted-cross-wearing, spiked-gauntlet-brandishing visages. Their brand of corrosive black/death is sadistically brutalizing, mind-mauling, and vicious. But as you’re about to discover, there’s a lot more to their debut album besides naked hostility and a fiendish disregard for your mental and physical welfare.

That album, Sob o Feitiço do Necrobode, will be released on February 21st by Iron Bonehead Productions, a label that clearly knows how to separate the wheat from the chaff in sifting through the vast harvests of extreme metal. And today we’re bringing you a complete stream of the record — preceded by the following introductory review. 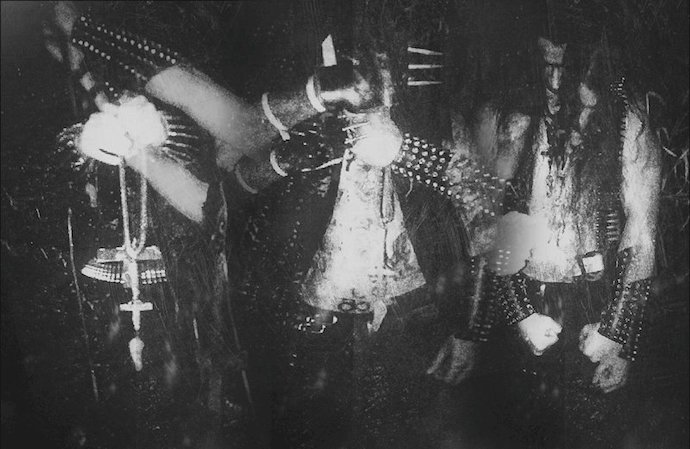 The basic ingredients employed by this iron-fisted Portuguese trio in mounting their hellish assaults are not difficult to pick out, though what they do with those ingredients is more than the sum of these parts.

The songs are compact; Necrobode gouge and pound their way into your skull, ravage what they find there, and finish their dirty work efficiently. They use bone-fracturing drumwork, bass lines that sound like an excavating machine chewing through concrete, and deep, grinding riffs with a thoroughly filthy tone that penetrate the brain like powerful whirring drill bits. All that together makes a heavy-weight and often crushing impact, and the vocals add a further element of ferocious bestiality to the attack, ranging from ghastly bellowing roars to wild, savage howls and terrifying screams.

In their rude-and-crude songcraft, Necrobode don’t do anything particularly adventurous or filigreed with sonic embroidery. Within each song they alternate between a few powerful riffs, and match those changes with variations in the drum rhythms, and sometimes changes in tempo, and tend to end the songs with ominous and esoteric ambient experiences.

To describe this formula, it sounds stripped-down and even primitive, but the thing is, those riffs are so fucking good and the rhythm section is so fantastically bone-smashing and neck-wrecking that the results are compelling. Moreover, the eerie, occult resonance of the leads and the macabre carnage wrought by the vocals maintains a feeling of terror while the band are getting their hooks in your head.

And make no mistake, Necrobode know how to write a hook, whether in the form of addictive riffs or skull-plundering rhythmic grooves. “Satanás Governa” might be the most immediately addictive of all the tracks — there, the instantly memorable riffs switch between a kind of writhing sorcerous pulsation and a hammering cadence that would split stone, interspersed by eldritch arpeggios. But it’s far from the only infectious track on the album. Really, they all are, though some of them are more insane and others more sickeningly dismal in their aspect.

The album opener, “Tumba Universal” is roiling and ravenous but also a potent head-banger, especially when the band shift into more mid-paced gears and just brutally pound and gouge. “Santo Santuário do Ódio” is a dose of barbaric charging mayhem, accented by dismal buzzing leads and maniacal snare work,  but the band again segue into a mid-paced, skull-busting groove of cruel strummed chords and methodical drum blows.

On the other hand, “Algol” is lumbering and dirge-like, a stalking cadaverous monstrosity of sound (which then becomes an explosive eruption of calamitous drumming, massive bass excavations, and feeding-frenzy guitar work), while the predatory riffing in “Culto da Intolerância” channels a dismal and diseased melody that becomes increasingly queasy and sickening in its sound, paired with obliterating drumwork and the pneumatic pulse of the bass.

The pairing of different kinds of riffs surfaces again and again, whether it’s the combination of weird and witchy melody that becomes cold and sadistic as it descends in range during “Penetração Diabólica” or the sensations of blood-lusting vibrancy and grim, hornet-swarm cruelty in”Possuido“. For its own part, “Sangue da Virgem” moves from super-heated, desolating ferocity to a ghoulish stomp laced with lunatic screams, and back again.

The cavern-deep riffing and absolutely skull-fracturing groove in the penultimate track, “Capela Heretica“, generates a kind of horrifying grandeur, but moves into a surge of crazed, clattering percussion and maniacally cavorting chords. The song also has a momentous and frightening grand finale, which seems like it should be the obvious conclusion for the album. But there’s one more track, “Liturgica Profanação“, in which choral voices engage in a doom-shrouded, echoing Gregorian chant, mystical and entrancing, solemn but saturated in grief, accompanied only by the slow clang of bells and the crackle of static, as if we’re hearing a performance on an old phonograph record.

For further clues to what Sob o Feitiço do Necrobode holds in store, Iron Bonehead‘s press material for the album makes references to the likes of Bestial Summoning, Naked Whipper, and Blood, as well as classic VON, ’90s Demoncy, and Drawing Down the Moon-era Beherit.