Vår Avgrund, the new album by the Gothenburg-based sludge/doom quintet Walk Through Fire, is not meant to be a joyous experience. Its very name, which translates to “Our Abyss“, foreshadows a 75-minute trip that’s intended to be heard straight through as an integrated piece of music, one designed to drag listeners ever-deeper into sensations of existential dread and misery, despair and anguish.

But while the album’s themes mostly circle around “the inevitability of tragedy and suffering in life – both as individuals, and as a collective”, this does not mean the music itself is relentlessly gloom-shrouded and oppressive, not something to be avoided like the sight of mass graves or a visit to the morgue.  As undeniably dark as the music is, it is also fascinating, and quite often inescapably mesmerizing. In part, that is because Walk Through Fire are open to experimentation — indeed eager for it. And the song we’re presenting today is a prime example of that. 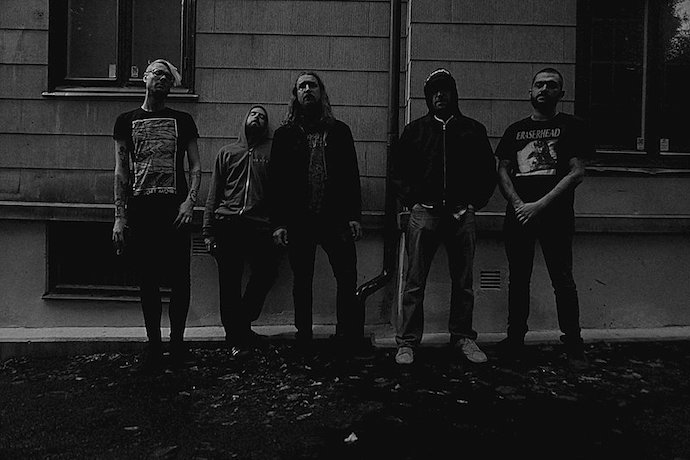 This new song, “Vägar Mot Slutet” (Roads to the End), is spellbinding. It showcases not only the formidable talents of the band but also the remarkable craftsmanship of a guest soloist. And we’ll let guitarist/vocalist Ufuk introduce her:

“We never thought we’d ever have a saxophone solo on one of our songs. But once we got the idea in our collective mind, we couldn’t let it go. We asked around for saxophonists and got in touch with Malin Wättring. After briefly explaining our ideas over e-mail, we set a date to go to her studio and record. When we got there, we talked for about 10 minutes and then she said, ‘Let’s begin’.

“Four brilliant takes in a row to choose from, done in under half an hour. It was insane really. We were totally blown away by her performance. She simply explained, “This is what I do.'”

Both the inspiration for that solo and the execution of it are high points of this song, but not the only qualities that make it so compelling. The track is glacially slow, its cadence measured by the sharp crack of the snare, the deep thud of the bass, and the slow descent and reverberation of distorted chords. The vocals convey wretchedness and fury in raw, scraped-throat screams. The music seems to channel the gradual but inexorable suffocation of life, the choking off of oxygen, yet it also simultaneously creates a trance-like response in the listener.

Filaments of dissonant melody shimmer through the craggy facade of doom, coming across as a bereaved ghostly emanation. And when the saxophone arrives, it is an eerie moaning exhalation at first, and then elevates into a soulful wail that writhes and grows increasingly despairing and hopeless in its tones. The rest of the band fall silent, and the saxophone carries the song to its bitter close, accompanied only by glimmering organ tones.

When silence falls, you may need to shake yourself, to bring yourself out of such an intense reverie as this music creates — or perhaps just linger longer, immersed in the feelings and memories of what you’ve experienced.

Vår Avgrund is Walk Through Fire‘s first album with lyrics in Swedish. It includes cover art created by long-time friend of the band, Göran Nilsson (Hydra Illustration). It will be released on March 27th by Wolves & Vibrancy Records and Bloated Veins in a limited edition of 500 copies (400 black / 100 white marbled) double 12” heavyweight vinyl packed in a heavy gatefold sleeve.

Today’s premiere is the second track to be revealed from the album. The previous song, “Den Utan Botten”, can be streamed at Invisible Oranges (here), who commented: “This is music for the contemptful and those who feel erroneous in life. This is hatred, both inward and outward.”