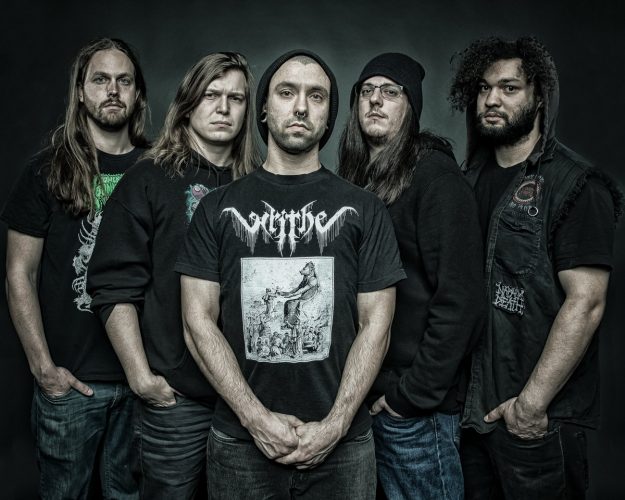 Yes indeed, this isn’t the first time we’ve helped spread the music of this Minneapolis band to the soon-to-be-bruised masses. In 2017 we premiered their aptly titled debut album Sick/Nasty, which we summed up as a dynamic, body-mangling, brain-twisting thrill-ride — “an utterly wild, technically pyrotechnic, stunningly brutal fireworks display” that combined “thuggish skull-cleaving with eye-popping explosiveness, slow, sinuous sensuality and gruesome morbidity, and solos that will make you drool”.

And now Graveslave have just released a hellacious new EP named Devotion, the first of two brutal deathgrind EPs the band plan to release this year. Today we’re presenting a music video for a track from this first one named “Fatal Push” — a video that presents… well… a sharp contrast between what you see and what you hear. 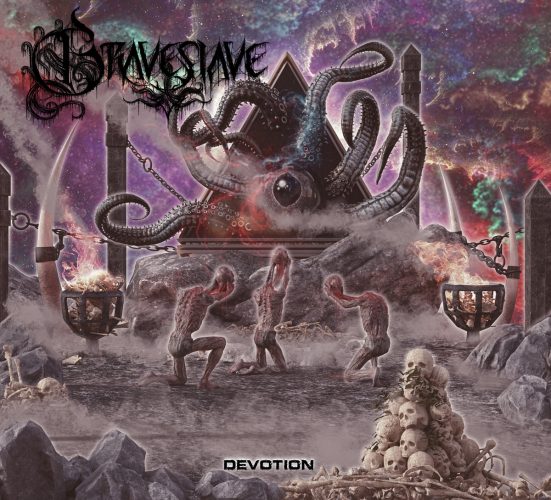 We’re all used to seeing death metal bands put on their meanest and most gruesome faces when they discharge their compositions in public. And make no mistake, “Fatal Push” is plenty mean and gruesome, dismal and demented at first and then segueing into a maelstrom of battering percussion and seething, savage riffage, accompanied by vicious roars and crazed shrieks. But while Graveslave have in other contexts proven their ability to rip and ravage with a fury (and they eventually do that again here, capping that assault with a flame-throwing solo), “Fatal Push” devolves in its mid-section into a menacing and morbid interlude of horror, in which a prominent bass line is backed by filthy chord reverberations and then leads into an eerie, wailing solo that will put the hair up on the back of your neck.

In other words, Graveslave’s dynamism is again on display, as well as their talent for combining obliteration and atmosphere.

As for what you’ll see as you listen… it’s… not what you’ll expect, having just read that description of the music.

Credit for the video hilarity goes to Voida Visual, and of course to the band.

Devotion is available now on CD and digitally, and you can pick it up via the link below. Also below you’ll find the Graveslave’s previously released video for “God of Slaughter“, which kind of has an “Always Sunny in Philadelphia” theme, “where we’re all acting like assholes and ruining everyone’s good time” (the band’s words), along with today’s goofy video premiere.